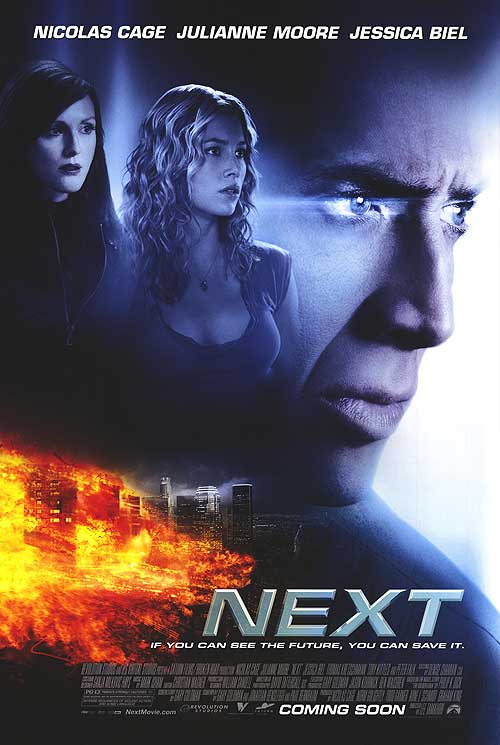 It’s time to take a look at a thriller from the not too distant past. This is one of those films that I figured I would have heard about, but I don’t recall ever seeing anything about it before watching the movie recently. It’s got a pretty cool premise and I liked the story but some parts definitely didn’t mesh as well as they could have. The ending for example was nearly perfect if it had just cut out a few minutes earlier.

The FBI has grown desperate since the Russians are preparing to nuke the U.S. They stole some nukes a while back and the FBI wasn’t told about it for around 2 weeks. Now they know that the timer is close to 0 but they have dug up no leads. Special agent Ferris has some ideas though. She’s been tracking a psychic named Cris who has the ability to see into the future. She plans to have him uncover the Russian plot. Meanwhile Cris has been doing his best to lead a normal life. He’s learned some magic tricks and makes a steady income. Unfortunately since he can see 15 minutes into the future he’s always getting into a lot of trouble as he stops people from shooting everyone up, but has no proof.

Why hasn’t Cris just skipped town? Well, he’s been having dreams about meeting someone named Liz at a certain cafe. The reason why this is important is because as I mentioned he can typically only see 15 minutes into the future and it has to directly be relevant to him. Why is he able to see weeks in advance when it comes to her? Cris isn’t sure, but he feels like it is destiny and decides to wait for her. This increases the stakes though and can he possibly convince her of their destiny before she calls the FBI in on him?

Being able to see 15 minutes in advance is just as overpowered as you would expect it to be. It’s hard for anyone to stop Cris because he’s already played this out in his head. To me it seems like the ability is always on and he just keeps auto jumping back whenever he dies or gets into a corner. It makes for a lot of fun visuals where you’ll be enjoying the movie and suddenly an old scene pops in with no transition. You just know that he’s gone back 15 minutes. Technically it isn’t time travel as it was just a vision but since it’s basically always activated it sure feels that way sometimes. A cool scene is when he uses this to evade bullets and actually close in on a gunman. There’s just no way you can lose when you see this far in advance.

That being said, I wouldn’t call Cris a great character. His romance with Liz is handled pretty poorly. Naturally the do-over attempts are pretty manipulative here as he just keeps re-rolling his answers like in a gatcha game until he gets the ones that he wants. He claims with Liz that he doesn’t use his abilities with her, but we know for a fact that he does, both in the cafe scene at the beginning and a scene near the end of the film. Since the ability seems to be automatically activated I don’t think he could totally turn it off even if he wants to. The film is a little unclear on that but that’s how my interpretation of it works at any rate. He knows Liz for as few hours and is sold. Sure, he’s been seeing her every night for ages but from her point of view this is some random stranger who says a lot of odd things and is always staring at her. How would she turn this into a proper romance? She definitely gets super comfortable around him pretty quick and considering that she just dumped someone, a period of time without rebounding would make sense.

So the romance here is just weak. Liz is a decent character otherwise as at least she doesn’t get suckered too easily. Going into a car with someone who claims to be an officer is never a good idea though. I don’t care if they show you the badge, you don’t get into the car the way that she did. That’s always a big mistake. Meanwhile the main FBI agent is Farris and she is definitely convinced that Cris can help. I don’t think that she thought her plan over very well though. She figures out that he can only see 15 minutes into the future so how is that going to help? Her plan is to have him watch the news until the bomb is mentioned so they know where to go, but 15 minutes isn’t a whole lot of time. Depending on where in the city the bomb is there is no way they’d make it in time. His power just doesn’t matter in any meaningful way. So her boss was actually right in not hedging their bets on Cris even if his methods didn’t work either. 15 minutes isn’t enough time to find and deactivate a bomb. It’s just not happening, especially not when the villains have a lot of other bombs and guns at the ready.

The best part of the film is definitely the various action scenes. The climax is particularly solid and we get to see Cris really go all in with his pre-cog abilities. Knowing exactly what’s going to happen and having infinite live to do it with is just cool. I also like how they introduced his abilities at the beginning with how he evaded everyone at the casino. You will feel bad for the informant though as things never go well for him. Next has a really solid soundtrack as well to go along with the cool visuals. The film’s just a lot of fun and the quick moving plot works well here. There’s always something happening.

It may not be a film that will win any awards, but there’s a lot to like here. Really if you just take out the romance and fix the ending then I dare say that you might even have a great ending here. I won’t go into detail on the ending because there really isn’t any way to say it without spoilers so I’ll just say that cutting out a few minutes earlier would have been amazing. When you watch the film you’ll know exactly what I mean. It definitely would have been unexpected, but still pretty satisfying in its own way. It also works within the limits of the ability without stretching things to the max. The ending that we do get just isn’t as satisfying. Meanwhile the villains really don’t get to do much at all. You’ll forget that they exist at times because of how little presence they have here. They’re not bad, but they almost feel superfluous.

Overall, Next is definitely a very unique film. On the surface it’s your average thriller, but the time ability definitely throws a nice wrinkle in there. Since Cris should be invincible there are still some moments where you might have to suspend some disbelief, but at the same time maybe he just wanted to go down this route because the other futures he visited were worse. The ending also is a potential plot hole if you ask me. You can reasonably make sense of it, but I just feel like it’s a little beyond the scope of ability shown til now. If you haven’t checked this film out yet then you should go ahead and give it a watch. It’s pretty fun.

2 thoughts on “Next Review”