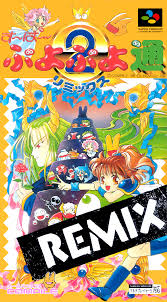 This is definitely an interesting SNES online game because it wasn’t translated. The game is still in Japanese from the controls to the cutscenes. While this does mean it’ll be impossible to follow the story unless you learned some Japanese, at least the game came at all. Better to arrive like that than to never arrive right? I like Tetris gameplay a lot and while I realize Puyo is quite a bit different I thought my skills would transfer over. Unfortunately that was not the case and I kept getting wrecked on the second level. There must be some gameplay mechanics I am not aware of because this did not feel legit.

When you boot up the game there are quite a few modes. You’ve got speed run, options, and the main one. There were two others that I did not click on. Naturally I ran to the main mode and did not look back. I was able to consistently beat the first guy with my quick combos. The problem was always the second level. So the goal of the game is to match 4 bubbles of one color. As long as the bubbles connect in any form then you just need to get the 4. It doesn’t have to be a complete line like Tetris. As you get more and more combos you will be sending bubbles to the opponent’s side. Once someone’s screen fills up with bubbles that person is defeated. You can get rid of these bubbles by making matches so it will come down to speed….seemingly.

The issue here is that I only ever seem to send over a few bubbles to my opponent while he is suddenly able to send an army at me. I’m assuming it’s because he either lands some kind of combo or manages to match 5-6 at a time. I tried both options but even then he would take the win. It would happen pretty suddenly too as I would have a huge lead and it would all go away in an instant. It definitely didn’t feel very legit, but I’m sure one day I would get the hang of it. That day was not in time for the review though so I was left spinning my wheels for a bunch of rounds before I eventually turned in the towel.

I think the craziest part here is that this was technically still just level 2 of Easy mode. It makes you wonder what normal and advanced levels of difficulty look like. The game really expects you to be a master at this point and I suppose this is the second game in the Super series so maybe that’s a fair expectation. I did try one round of the speed run part, but I died pretty quick. That seems like it would be a good way to hone your skills and level up though. Eventually you could land the pieces without any real effort. That being said, the toughest part about going at a high speed is that it’s easy for the control stick to move to the left or right and then you’ll have quickly gotten yourself into a big hole. Once you’ve messed up a piece making a comeback is even more impossible.

I suppose the gameplay wouldn’t change much from level to level so I still got most of the experience. The most interesting part of the game was definitely the plot and it’s not like I could actually follow that part. The animations were very expressive and it looked like it had a pretty colorful story. The graphics have aged incredibly well for its time and I’d be game for a newer Puyo Puyo game coming to America someday. I’d buy an HD collection for that. The soundtrack is less noticeable, I can’t really recall any of the tunes to be honest. That’s something it’ll need to work to improve since the music in Tetris 99 is downright excellent!

Overall, Super Puyo Puyo 2 is one of those games with a lot of promise. I like the fact that it has an actual story. It looks like an RPG and the colorful characters really help to make this game stand out from the pack. I suspect that is part of what helped make it so popular along with the gameplay. The gameplay didn’t really click for me but I’m thinking that’s partially because you’re just thrown into the action. If you’re more familiar with the gameplay and know how to really put up a fight then I expect you’ll really like this game. Try to learn some Japanese while you’re at it and then you’ll even have bragging rights when your friends come over to play.