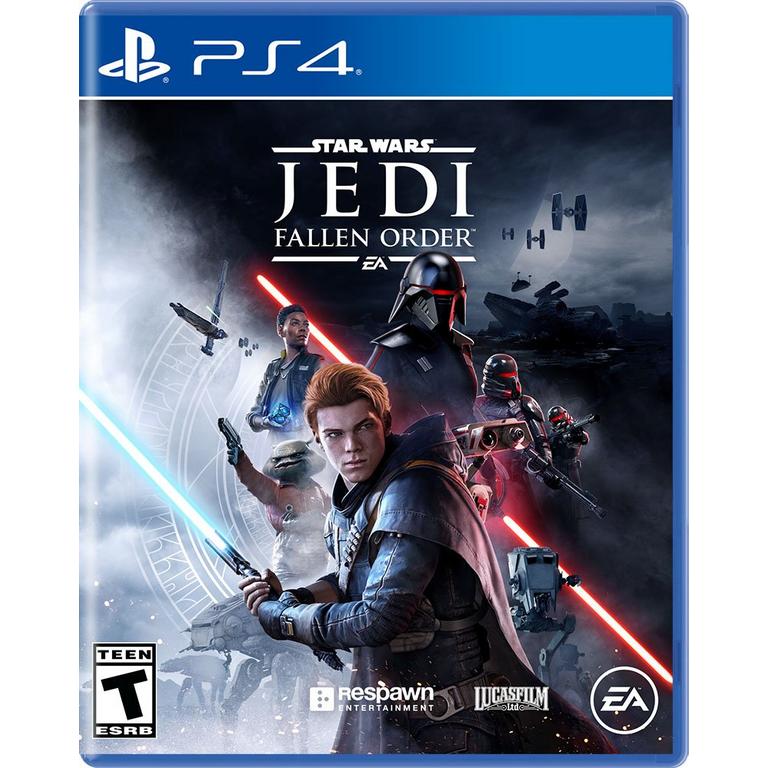 It’s time to look at a Star Wars game that I’ve been hyped for as soon as the first trailer came out. This looked like a really good return to the Force Unleashed games and it does deliver. It’s not quite able to match the complete masterpieces of that duology, but comes close and definitely solidifies itself as a great title. It’s one of the best Star Wars games of all time and I would definitely like to see a sequel.

Carl used to be a Jedi in training, but after some tragic events he now lives in hiding. It’s hard to stay out of view for long during such turbulent times though and he soon finds himself back in the fight. There exists a holocron with the names of every kid who currently has some force abilities. Naturally the Empire wants this, but so do some rebels to bring back the Jedi order. It’s now a race against time to get to the cube first. The journey will span several planets and Carl will have to face his own inner demons along the way.

The gameplay is that of a 3D platformer with a lot of combat. If you’ve played The Force Unleashed then imagine that with some Spider-Man type gameplay. You’ll have some quick time events, but the bulk of the combat gameplay revolves around precise swings and parries. This makes the game pretty difficult at some points, particularly the boss fights but it’s also why the game is so much fun. It never feels unfair or difficult due to bad level design. It’s all quite fair and helps you nail down the timing. If anything this game is probably really good for improving your reaction times. In particular the final boss is incredibly difficult and took me many tries, but it’s great to see your progress as you go through the attempts.

The gameplay also makes it so you can’t just ignore the minions. They’ll actually deal some considerable damage if you try to run past them and you can’t blindly attack either. You’re going to need to block and parry with them as well. The exception are the storm troopers who you can stop any which way. It is fun to perfect block their shots to reflect them though and this is where the upgrades come in handy. One upgrade allows you to block automatically while running which makes it feel even more like you’re a Jedi. Then there is the upgrade where you do a combo attack which allows you to break almost any minion’s guard. It is extremely handy and was even critical against the second to last boss.

I recommend going for the upgrades that increase your base stats first though like improving your health and force abilities. I don’t even need to explain why those are handy to have. In most games my first objective is always to increase stats and then I go for combo moves. I figure it’s best to have top notch fundamentals first and then you have fun with the flashy stuff. There are also upgrades that increase your health shots, health, and force in the wild so keep a lookout for those. I found enough to increase my health and shot once, but didn’t find the rest in time. They are very helpful as well.

The platforming gameplay was a little weaker for me even though it was pretty ambitious. I think my main issue here was the fact that the jumps didn’t always go very far so I would fall to my doom. Even when doing a normal jump from vine to vine I wouldn’t always make it. Then you can get locked in hit-stun when you’re attacked so you lose your double jump. I died quite a few times for things like this, but fortunately you have a very quick re-spawn system so you never really lose much time there.

The one real negative in the game are the very long loading screens. Whenever you turn on the game you have to sit through a bunch of unskippable company logos. Then when you go from planet to planet there are long periods of time you have to wait as everyone buckles in. Couple that with the long time it takes to respawn after a complete death or all the menus you have to get through to save and it adds up. It might be that the game added so much content the game has a hard time loading it up right away. If that’s the case then it’s a worthy trade off but it is very noticeable. We’re almost talking Sonic 2006 at times.

As for the story, Carl makes for a good main character. Keep in mind that he is no Starkiller so don’t expect this guy to be running around defeating Sith lords and knocking out Vader. Carl is more of an in-training Jedi so he is still getting used to his various Force abilities. Still he does come up with some good wins as the game progresses. He makes the right decision in the end even if it took him a while to get to that point. Then we have Cere who used to be a Jedi, but due to some stuff in her past has put away her Force abilities. You never truly lose them even if you hide from the Force, but you can’t use them without accepting it once again.

She’s not quite as good. For starters another character had some valid points about how this is all her fault. The heroic sacrifice move doesn’t work if you aren’t truly powerful. It would have been better for them all to have left together. Live or die, at least you’re together right? Cere does do her best to get back up from this in the climax where she looks good. It was one scene where I disagreed with Carl, but I can’t go into depth without spoilers. Needless to say it involves using the Dark side and depending on the situation that’s not something you should be opposed to using.

Many Star Wars characters in the expanded universe have shown that you can use the Dark side without turning evil. Ultimately the Force is just a power and it’s all in how you use it. Once again I point to Starkiller who mastered both sides of this ability. He was a prodigy, but that doesn’t mean that the others can’t do it as well. The Sith abilities are very powerful so if you can master them then it will be helpful for the heroes as well.

We’ve also got some supporting characters like Merrin who appears near the end. The fact that she has powers already set her off to a good start. She’s fun to have around, but appears quite late in the game. It makes for a fun tag team fight like Link and Zelda vs Ganondorf though. Then there is the mysterious stranger in one of the final planets. He ends up having a pretty big role. Between his hype design and strong abilities he was one of the best characters here. Obviously the guy is pretty shady and sort of insane, but he is the kind of character who spices things up. I like when a new antagonist shows up out of nowhere and changes everyone’s plans.

Of course the main villain is the Second Sister from all of the trailers. She has a lot of pretty great scenes and fights with us quite a few times. Between the fun design and her character I would say that she is one of the better villains. It helps that I have also always liked the Sisters group. They tend to be on the evil side, but it’s nice to have a third faction who aren’t necessarily Sith or Jedi. The third sister in the game gets the smallest role and doesn’t really do much though.

Finally I also like how some of the fights feel real before you actually realize that you can’t win. The health bar is going down slowly but the boss just feels so insanely powerful. Typically you have to actually get the boss down to 50% but when you don’t know that and you have them down to 60% while you’re at 1%…you wonder how you can make a comeback. It’s a good way to build up tension and the game handles it quite excellently. The game developers really did a great job here.

The graphics are definitely top notch as well. The cinematics are quite striking. It’s pretty much movie quality here and the graphics during normal gameplay are really good as well. It’s all very high level although I’d expect nothing less from EA. Even with the sport games they churn out every year the graphics are always incredibly impressive. I also enjoyed the soundtrack. It’s not super memorable, but it has that classic Star Wars vibe. You’ll feel pretty hyped during all of the boss fights.

The actual campaign here is pretty long. You should be busy for around 15 hours or so and then there is a lot of replay value. You can go back to all of the old planets to get the last transmission logs and max out your character level. Platinuming the game should take you an extra 20 hours if not a little more. There are a lot of collectibles out there and the planets are quite large. It’s one of those games that would be fun to Platinum though as none of the trophies are tedious or have forced grinding in them.

Overall, Fallen Order definitely lived up to the hype. It’s a very complete game with an engaging story and top notch gameplay. I really like the trend of cinematic style gameplay like this where you are in control the whole time, but do get treated to little cutscenes depending on how precise your movements are. All of the boss fights are excellent and while the platforming could get a bit iffy at times, it’s certainly the best we’ve gotten in the series. The Clone Wars Republic Heroes isn’t even close and that was really the last big platforming title. If you haven’t bought this game yet then you should definitely change that as soon as possible!