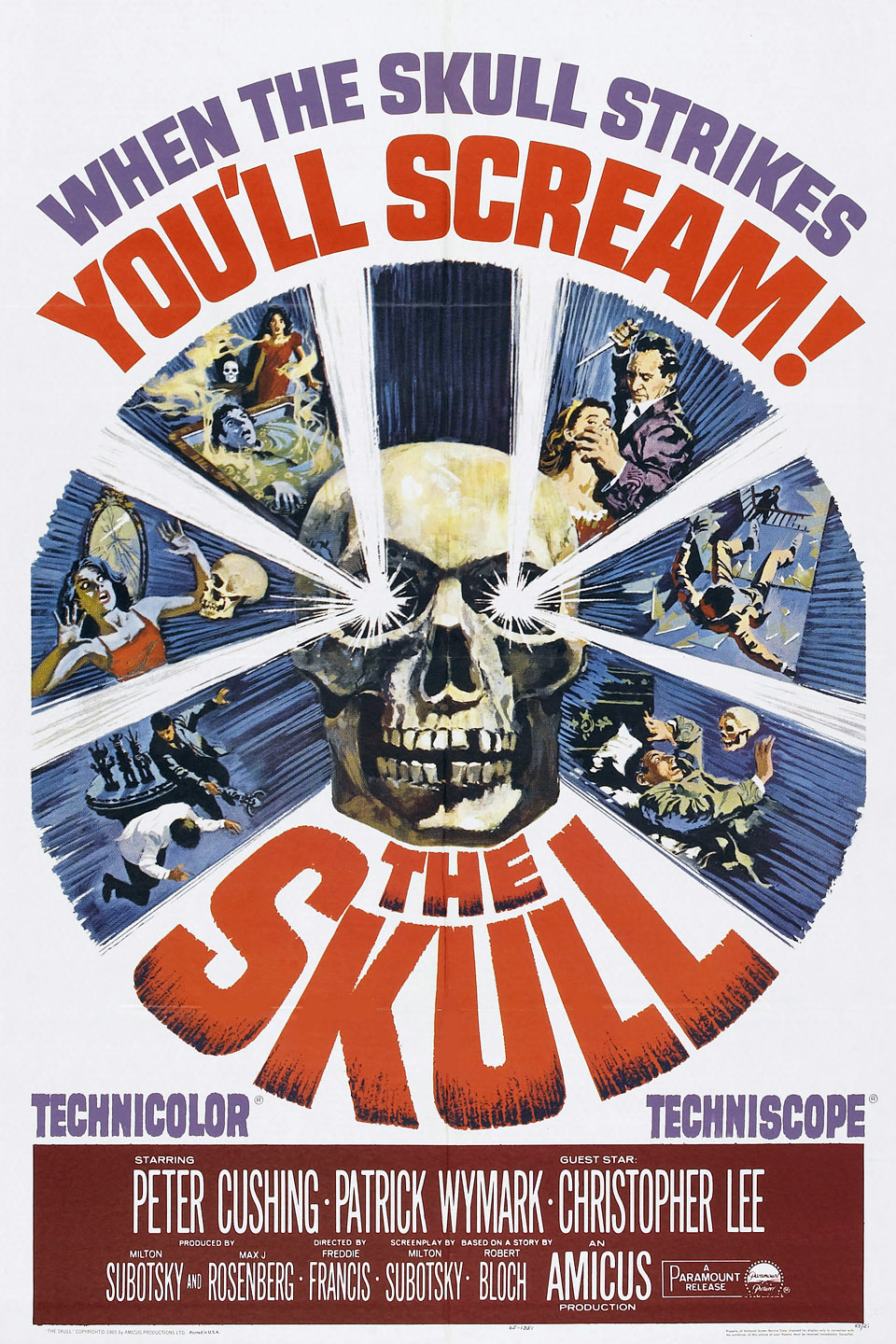 Whenever you have one of these old horror films with Peter Cushing you can expect a lot of drama and tension. He doesn’t scare easily from the villains but they do give it their best. Having a villain be an actual skull is definitely a bold move for sure. It’s not every day you have a skull floating around like this is some kind of Youtube fan video but it works rather well.

The movie starts with a guy running home because he finally got this skull he was going for. He’s so focused on the skull itself that he even tells his friend to go away after she went to the trouble of preparing for his arrival. When he tries melting the skull, it quickly takes him down for the count. It proceeds to mind control another guy to destroy the friend.

In the present, Christopher is competing in an auction with Matthew on a bunch of items. He ends up losing on a batch of evil looking dolls since Matthew overbid for them by a large sum. When asked why, the guy says he has no idea. Ah well, Christopher heads back home to his business of writing about the occult and accepting odd gifts from suspicious characters. This time the guy has brought him a skull belonging to the most dangerous murderer in existence. This could be the break Christopher has been looking for, but will it only bring him doom and despair? Only time will tell.

The film isn’t afraid to get rather crazy as well. At one point, a group of fake police show up and kidnap Christopher. They take him to a church where these guys are having a crazy ceremony and force him to play Russian Roulette several times. Fortunately luck is on his side so Christopher is able to escape and live another day. Things definitely could have been a whole lot worse for him so he should really consider himself fortunate.

Now, he does make some dicey moves like keeping the skull even once he knew it had been stolen. It seems like he’s not very particular about where he gets his objects from so long as it helps is research. So in that respect it’s not like he’s a hero or anything. Still, he is a fun character in large part due to how confident he is. Nothing shakes him in the slightest. Even as he sees multiple dead bodies he keeps it moving.

At one point he even notices that the Skull seems to keep being in a different place but he just rolls with it. The skull stares at him all night and Christopher doesn’t really care. In fact, they even have a staring contest at one point and you could argue that Christopher won that one. Of course, ultimately you get the feeling that he’s probably doomed but at least he put up a good fight.

As for the Skull, well it’s not very scary. You have doubts on if it is even alive for most of the film. It seems like it emits negative aura or something which is why anyone associated with the skull starts going around murdering people. You can make a strong case that this doesn’t have to mean that it’s sentient though, but that it’s cursed. Of course, all the stare downs do give the impression of it being alive of course.

Then by the climax it is clear as the skull is able to fly around with some retro special effects and even summon a book. So, I have to give the film kudos for making one of the most surreal villains of all time. Being unique doesn’t always mean good though. I’ll take most creatures over this guy but as a one time adventure it works well enough.

I would say how effective the film is will really depend on how much you enjoy the suspense. The characters are very slow to do much of anything. The movie is on slow burner mode the whole way through with only a few jump scares to break things up from time to time. The writing is really solid though which helps. It’s why a modern remake would have a hard time matching up to this one. At least here you get the solid dialogue between the characters and everyone talks in a rather distinguished way.

It would have been nice if Matthew had appeared more. A lot of the best scenes in the film are the dialogue scenes between him and Christopher. For example, the auction scene was handled really well. Both of these guys are rich and used to winning. So when it becomes a bit of a challenge none of them back down. They also seem to have a good working relationship when they aren’t competing. It’s part of what makes the climax rather emotional, or at least as emotional as this can get.

You can kind of tell how this film is going to play out from the start though. In these kinds of films where the villain relies on mental hypnosis to take the heroes down, they ultimately never end up standing tall against it. Without fail you can always count on the hero succumbing to the darkness which is unfortunate. Otherwise you can applaud their determination about not believing in such superstitions. It just falls flat once they actually lose to it.

Overall, The Skull is a pretty solid horror film from back in the day. The whole thing is built around a lot of suspense as each scene is played quite dramatically. The score is good with each tune underscoring how scared you’re supposed to be. Even Christopher’s character goes from being absolutely confident to slowly starting to feel some terror as he knows that the Skull cannot be beat. The very final scare scene is almost a bit humorous in how over the top it gets. So next time someone tries to give you a skull that is supposedly haunted and lets you know that it has also been stolen, you should probably stay on the side of the law and refuse it.

5 thoughts on “The Skull Review”