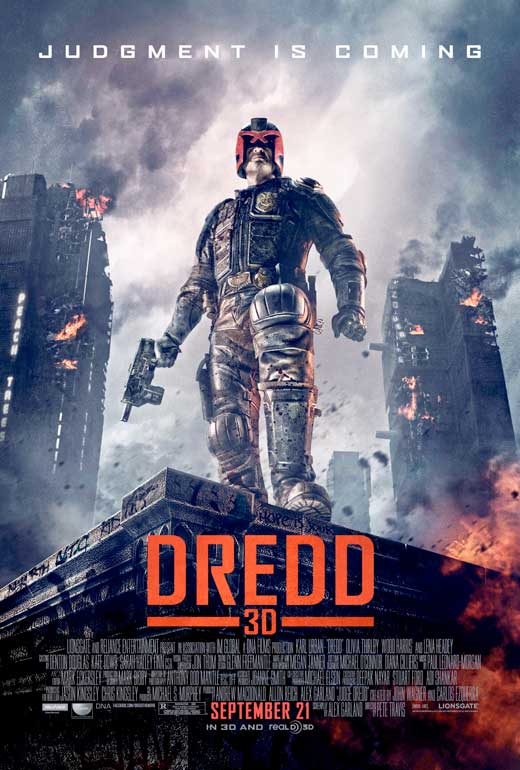 Judge Dredd has returned for another film outing. The first film was rather solid and had a good blend of action and excitement. This one doubles down on how corrupt the city is which makes sense on why the Dredds are around. It unfortunately focuses a little too much on the tragedies as opposed to Dredd making the world a better place and ultimately falters due to its own violence but at least you do get a hype soundtrack here and some memorable action scenes.

The film starts off with Dredd taking out some more delinquents and then his boss says that he will have to evaluate a new cadet. Dredd isn’t thrilled about that because historically he’s been a solo act but this is how it has to be this time. The new recruit is Cassandra and she is a telepath which is definitely handy to have in the field but Dredd still feels like she might not be ready for the level of danger in this job. He intends to be a harsh but fair mentor but what should have been a routine bust ends up being a whole situation as Ma-Ma takes over the building and locks it down. She is the head of the ultimate gang that runs this show and says that Dredd must die. He and Cassandra must try to stay alive while also keeping their prisoner Kay alive so he can be tried and brought to justice.

With the heroes locked in that does make for a rather tense setting in the building. I also thought there was a good amount of variety as the heroes go through the floors so it never felt confined. This is a really big building after all so that never became an issue. The visuals are solid here with a lot to look at and Dredd’s uniform definitely appears to be very faithful to the comic. I wouldn’t have any complaints there. It also ties in well with the really good rock music that plays throughout the film. It helps to get you in the zone and it makes the film as a whole a lot more exciting too. A good soundtrack goes a long way.

Dredd also makes for a very solid main character. He doesn’t let his emotions get in the way and tends to be a very pragmatic character who wants to take in his opponents alive but if they shoot first then he has to respond. Often times they are dealing with hardened murderers here so Dredd and Cassandra just have to open fire when they’re being attacked. Given the context of the world at large and the situation they’re in, it makes sense why they can’t all be jailed. In this world attacking a Judge is also a really serious offense.

The criminal system here is definitely interesting and I’d like to see that go into more depth someday. Regardless, Dredd lives up to his hype of being the most dangerous Dredd around. He overcomes a significant disadvantage in numbers and makes it all look easy. Not to say that he’s unbeatable though and he has to deal with real issues like running out of ammo but he always chooses the optimal path in tough situations.

Then we have Cassandra who does really well too. Her mind reading ability comes in handy several times. I was glad it helped her dodge a pretty big trick by the villains in pretending to be an ally at one point and it also gave her the edge over Kay. When you’re a telepath you should absolutely be able to crush anyone trying to beat you in the mind space and that’s exactly what happened here. If it had been close at all then that would have been disappointing. An expert just shouldn’t lose to a novice.

Cassandra’s abilities also put her in a unique position to really know who is a victim and who is an attacker. She’s more emotional and lenient than Dredd as well which can be an asset or a liability depending on the circumstance. Either way she would definitely make for a very good judge and they would be lucky to have her on the team. There aren’t any other heroes in the film with a notable role so Dredd and Cassandra have to be able to rely on each other when the going gets tough. If either one of them was not prepared for this then it would not have gone over well.

The main villain Ma-Ma was not all that good though. I appreciate that she had a plan for everything at least. No matter what the heroes did she would reveal another tactic or technique to even the field. Right up to the end it felt like she had everything under control and it took a really crafty idea to take her down. I can appreciate the grit it took to rise to the top and all but ultimately she’s quite psychotic and her grand goals don’t amount to much more than wanting to be at the top. If she could fight more personally that would have helped her.

She’s considerably better than Kay though. They’re both rather demented and I don’t think for a second that she would hesitate to do any of the stuff that Kay did, but he was around more so in a way we got to really see how depraved he was. The guy was annoying throughout the film and in a way he’s lucky that he wasn’t shot dead with a lot of the other villains. If Cassandra could have said she was 100% positive he may have been axed out near the very beginning.

So the Dredd movie has a lot of nonstop action and I love the premise of being stuck in a building filled with enemies and no way out. That part’s good but the film just ends up suffering due to how over the top violent it is. In a lot of ways I think the movie was trying to really show that it was different than the original. The original was more comedic and had a lot of light hearted moments so this one probably wanted to show how dark the city of Dredd’s is. It does make sense that it would be bad out there since the point is that the world’s really gotten as bad as possible but even then you can do that without all of the details.

The people who die are basically cut up and die in really vicious ways. You have the whole mental battle with Kay and Cassandra which immediately goes for the gritty/nasty kind of visions for them. They both play dirty in order to get the win at the audience’s expense. Then even the gun fights could be handled in more of a stylized way. You definitely don’t need the full explosion for every shot. There are plenty of action films with gun fights where you know the hit connected and the guy goes down but it’s not a huge splatter. It’s not as big a deal as the other elements since they are at least combatants but you could tell it’s the film trying hard.

I also thought the slow-mo was way overdone here. I went in a full circle with that because at first I was rolling my eyes at this, then they showed that it was a part of the plot. So I thought, all right…they showed this so we could understand the drug. But then it kept on happening over and over again so it went all the way around the world back into being excessive again. At that point it just became a negative. Slow motion shots can be cool, a lot of action films use this to great effect but there needs to be a purpose. A cool background effect, a nice scene, a great pose, etc. Not just someone smoking their drugs as we see it in slow-mo. It was just annoying more than anything. At least it did nullify one scene that I thought was going to be a fanservice moment but it turned out that this was not the case. Slow-mo has its use there at least although you could just say that the scene was filmed well because slow-mo could also backfire in that kind of way.

Overall, Dredd is a very intense action film. I can see the appeal as it’s basically the Punisher in a really rough environment who doesn’t need to take any prisoners. In this case he’s even government sanctioned so it’s not like he is defying the law to do it. I’d say you can do this without making the film be so over the top though. It takes away from the scenes that are pretty cool like when the other Judges showed up. That was really interesting. This film in a lot of ways is like Resident Evil. It’s a very interesting film but also tragic in the sense that you can see how this could have been great if it could have just held back a lot.