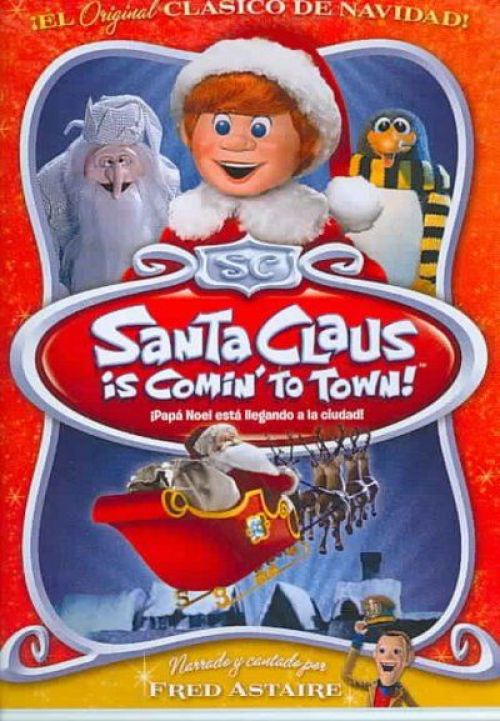 This is one of those old Christmas stories that didn’t become quite as legendary as Rudolph or Frosty. It’s still big enough that you will likely have heard of it though and who doesn’t want to learn about Santa’s origin story? I don’t think that it holds up quite as well as the others though and Santa just isn’t as much of an endearing lead as he could have been. Still, the film is a little more serious than the others and the stakes are much higher than usual.

A nice guy by the name of Mr. Kluger is getting ready to deliver some gifts when he realizes that a lot of children are asking questions about Santa Claus. Since he is the resident expert on the subject he decided to take some time out of his busy schedule to humor them. He tells them the story of Santa’s origin. Santa was left at the doorstep of some nice dwarves and they decided to call him Kris Kringle. They liked to make presents, but they could never deliver them because of a sinister Warlock who lived in the mountains. Time went by and Santa grew up enough so that he could defeat the Warlock. He set off, but little did he know that the true threat was waiting to pounce!

It’s a pretty cool plot on paper and it’s filled with twists, but it didn’t hold my attention quite the same way that the others did. It’s simply less charming and it’s not filled with wonder and excitement like the others. It may be in part because of the stop motion animation though because that style makes the world seem rather bleak in universe. The snow is not quite as majestic even though you can definitely tell that it is in fact snow. The animation isn’t bad for its time though and it’s not hard to watch, but stop motion is certainly one of my least favorite styles of animation.

Burgermeister is the big villain of the film and would you be shocked if I said that he doesn’t end up turning into a good guy by the end? This guy wasn’t going to fold so easily and you can practically see his sinister nature the instant that you hear his name. I know that Burgers are usually synonymous with excellent, but the meister part is what should make his name ominous. He’s not very powerful…he’s just a normal guy, but he has a lot of influence. As a villain, he’s actually quite good and he’s always munching on something. It keeps him ready for what comes next.

Santa Claus is a nice enough guy. He decides that he is going to get the toys to the kids one way or the other and he sets off on a very dangerous quest from which he knows that there may be no return. It’s the kind of heroism that you may remember from the good ole days. He’s pretty selfless and he lets bygones be bygones with the Warlock in the end. His reasoning for only giving gifts once a year by the end is pretty sound since everyone starts to weaken eventually. He’s a nice guy, but I still stand by my claim that he’s not quite as good as Frosty. He’s simply not as charismatic.

The Winter Warlock is an imposing figure who becomes sympathetic as the film goes on. It all happens so fast that you’ll probably be suspicious of the Warlock for a while, but he ultimately seems genuine. That being said, he doesn’t look very good considering that he has a nice array of magical abilities. By the end, we find out that most of his spells are actually pretty useless in a fight and breaking out of a simple prison is beyond his capabilities. He may have powers, which makes him stronger than most of the other Christmas special villains, but it’s still not saying a whole lot.

Jessica has a twist hear that you will start to realize as the film goes on. She plays the main heroine, which may be a first for the Christmas stories. Frosty’s Winter Wonderland had one, but I’m thinking that the title came after this one anyway. She plays a key role when she reminds the Warlock that he has a lot of magic so he takes out the corn. Otherwise, the heroes had basically given up and they wouldn’t have lasted much longer. Her screen time is a little limited, but everyone’s ultimately was since the film is still pretty short.

I think that one more factor which impacted the film was that Santa Claus wasn’t all powerful here. It’s always fun to see him being portrayed as an invincible being who can do just about anything. If we’re going to make a legend, we may as well make him an invincible one right? Santa should have inherited the powers of previous or future Santas in the climax and materialized some kind of super gift. It may be asking for a lot, but that would have been a good way to end the film on a pretty high note.

Overall, Santa Claus Is Coming To Town is a pretty decent film, but it’s one that could have been a little better. Santa Claus just doesn’t draw a crowd the way that his Christmas counterparts do, but it was nice to see how it all began for him. Having a villain with the word “Burger” in his name was pure genius and the Warlock made for a unique villain since most of them didn’t have magic powers back in the day. The special is well over an hour so it won’t take too long to finish it. Considering this, I think it’s probably a good bet to check it out as we are not too far past Christmas, but you could also watch the original Frosty The Snowman as a good alternative. After all, you’ll want to stay frosty during these cold days right?