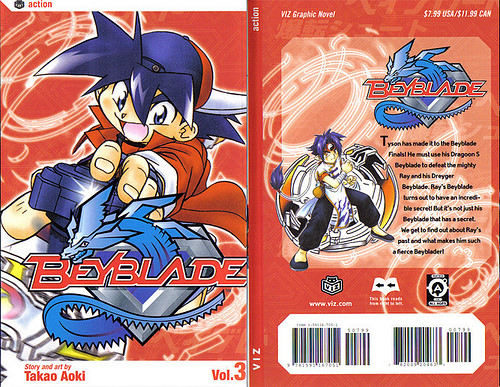 Beyblade is a pretty iconic franchise and one that has gotten quite a few tv shows and manga over the years. I probably still have it ranked as the biggest anime franchise that I haven’t jumped into yet next to maybe pretty cure. It’s definitely a fun series with quite a lot of tournaments and matches going on. It’s not a particularly long manga but one that makes the most of its 14 volumes. Definitely a title that lived up to the hype.

The series follows a kid named Tyson as he journeys to become the greatest Beyblade player ever. The game of Beyblade has become incredibly popular across the planet because of how it made top spinning fun again. Of course the road to being the best won’t be easy and Tyson makes plenty of rivals along the way. There are also villains who plan to use the tops for their own nefarious plans. Looks like it’s time for the heroes to let it rip!

As you can probably guess, there are a bunch of tournaments over the course of the Beyblade series. Everyone wants to be the best after all so it makes sense that you have to win a lot to stay at the top. While some of the tournaments have 1 on 1 battles, Most of the series is about team tournaments. The main characters actually had a pretty stacked roster for a while since Tyson was with all of his rivals. Of course, the villains were also quite powerful. One of the more serious arcs involved a kid who tried to destroy everyone’s Beyblade to prove to his father that he was a strong fighter. That arc had a cheesy ending, but actual villains which was certainly hype. Surprisingly the later volumes played it straight with the tournaments, but of course that works for me.

The final arc of the series is…you guessed it! A huge tournament. Naturally this was the perfect way to end things off as Tyson got to fight with all of his rivals one last time. They all got new metals from the sponsor to make them even stronger as well. He seems rather shifty the whole time but in the end it turns out that he was just a normal guy. During the whole arc I was waiting for the inevitable twist that the guy was evil but surprisingly nothing like that happened. The tournament went on without a hitch. We even got a private battle between Tyson and Kai before it was over. I always like seeing two of the fighters go at it before it’s technically their turn to fight. It builds up the suspense. A good example of this is Lan vs Chaud in the NT Warrior anime as they fought in the streets. It’s especially good if you know that the final fight is not going to end or if it’s going to be interrupted somehow. Unfortunately this is the case for Beyblade.

While it’s not something that would affect the score of the series in the slightest, the ending did leave much to be desired. The final fight doesn’t actually get to happen and it just feels rushed in general. I’m cool with it ending abruptly but only after a winner is chosen. I think it’s safe to say that Tyson would have won here but I still wanted to actually see it. Stretching the series out to 20 volumes would have done wonders for it as 14 just feels too short. It’s all over in the blink of an eye. At least that shows how solid it is.

Meanwhile the series does something interesting with the bonus chapters at the end of each volume. Usually they are just comedic stories for most titles, but in Beyblade they are used to give development to Daichi. At first you just wonder why this kid is getting so much screen time but by the end you realize that it was all deserved. It leads to him showing up in the main series and made his appearance feel more like a crossover than just an ordinary new character. For the past volume we got a big time skip which is certainly a trope that many titles like to use. The only problem is that once again the fight was off screen instead of being shown. Off screen fights are one of the worst things that you can do so it should be avoided at all costs.

As Tyson is the main character I’ll talk about him first. He is definitely a solid lead who is always ready for a good fight. He knows that a good offense will take you far and is always trying to make his top faster. Tyson always makes sure to have fun while he plays as well and never loses sight of that. If someone tries to stop him from a match whether it be friend or foe. The scene where he tied up Daichi was definitely fun and challenging Kai before their match was also the right move. Tyson just has that enthusiasm and intensity that you want to see from a main character. He never backs down from a challenge.

Then we’ve got Daichi who is the main character of the backup stories and a supporting character in the main series. I was actually worried at first that he was going to beat Tyson but fortunately that was not the case. While I prefer Tyson to Daichi, both are still quality characters. Daichi really improved a lot considering that he didn’t have much to work with. His origin story was also the most grim while being surreal at the same time. His father gets crushed by a rock but with his dying breath urges Daichi to take up his Beyblade and fight. Considering that he is being crushed to death while still alive, the father took it in stride. Well he would be proud that Daichi ended up being one of the best players in the world. 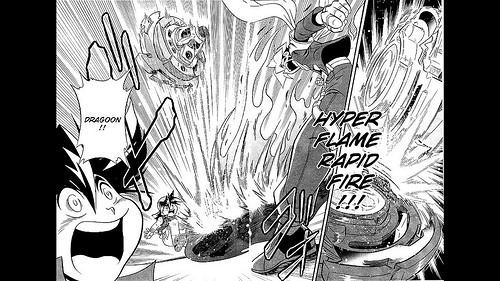 Then we have Kai who is the big rival of the series. He’s definitely an all star beyblader as well and really forces Tyson to keep on improving to match his pace. While you never really get the impression that he can beat Tyson, that doesn’t take away from his character. He still talks tough at every corner and can match Tyson yell for yell. Depending on how you interpret the ending maybe you can even say that he is the world champ although I would call that a stretch. Kai is always a step ahead of all the other rivals and the fact that he was able to learn Tyson’s ultimate attack so easily is pretty impressive.

Max is one of Tyson’s many rivals, but I could never take him quite as seriously as Kai. I guess I should say now that none of them were ever all that serious in comparison but maybe I’m setting the bar too high. As it stands, Max does have a pretty good defense so I suppose that I should acknowledge him as a good fighter. His defensive playstyle makes him a good counter to Tyson and he did make it very far in the tournament. Certainly farther than you may have expected.

Then there is Ray. He is another strong fighter who wants to be the champ. He does let the allure of power get to him quite a bit though as in his final fight you can barely even recognize the character. He only cares about winning, but fortunately Tyson snapped him out of it. Ray is skilled though and I may take him in a fight against Max. I’m sure it would be a close fight though.

We’ve also got Kenny who is the brains of the operation. Unfortunately he isn’t very good at the actual game though and you know how I feel about characters like that. It’s great that Tyson has someone around who can fix his top, but Kenny should really focus on improving his own skills first and foremost. That is ultimately how he will improve.

There are a bunch of other supporting characters of course, but I won’t really go into the rest. For some it’s because they’re too minor and for others it’s because its been a long time since I read the earlier volumes so I don’t remember them quite as well. As a result the series will have pretty good replay value if I ever read it again. One consistency that I always remember is how fun the series is though. Each volume had great pacing and never let up. It’s very easy to just pick up and read. There aren’t really any negatives to speak of here.

The art is rather standard but that doesn’t mean it’s bad at all. It’s not an elite title of anything like that but it is easy to follow the action. The character designs are on point as well. You can feel the intensity behind every play even if it never gets quite as exaggerated as in the TV show. I’m sure many people didn’t think a manga about tops could be this exciting but it just goes to show that anything is possible when tournaments are involved. 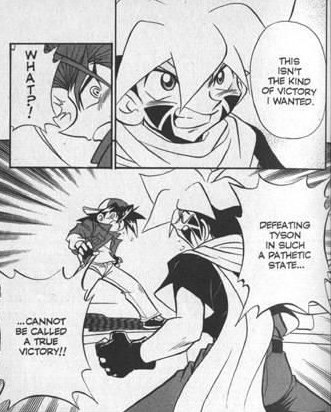 Overall, Beyblade is definitely a great manga. It is one of those timeless classics that has just aged very well. You can’t help but get really excited while reading it. It’s easy to see why it became such a big sensation over the years and I look forward to seeing how the sequel stacks up. If you haven’t checked this manga out yet then I would definitely recommend fixing that. This is one title that you don’t want to miss.