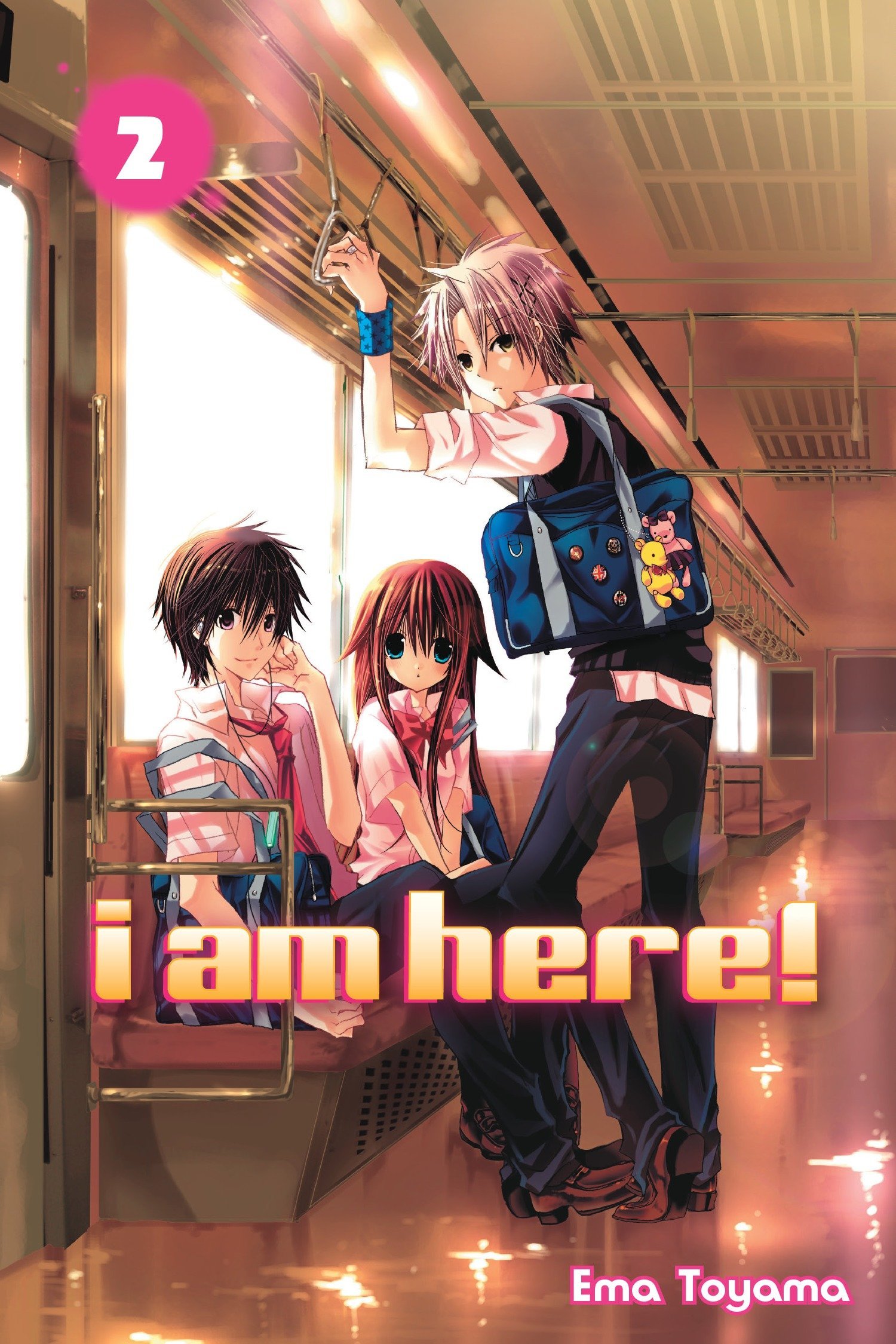 It’s time to look at a pretty short romance series. It’s a fun little read that I could recommend. At the same time, some of the characters can get a little tricky which I’ll get into in a moment. I’d say that the main takeaway here is that you can’t always trust the advice you get, but some of it will be legit. You gotta then act on it or the whole thing will have been a waste. It’s a tough situation for the lead for sure, but at least she has supportive characters at the ready.

So Hikage has never really stood out in school. People don’t notice her which makes her sad since she would like to have some friends. However it isn’t that everyone at school is mean, they just don’t notice her because Hikage is always hiding. It’s a bit of a loop as Hikage is too scared to approach anyone and nobody can approach her because she’s always hiding. Fortunately Hikage has two online friends who are always cheering her on. They encourage her to go and make a friend. Hikage takes a chance and actually manages to catch the attention of the two most popular guys at school. This leads to troubles with their respective fanclubs, but Hikage is determined to finally become a more pro-active person.

The message here is pretty good about escaping your shell and joining the rest of the world. Hikage is also less exaggerated in this regard than you would expect from most other leads. It’s handled pretty realistically and she seems like a nice person. Perhaps a little indecisive but that’s also something she tries to improve on as the series continues. While she’s not going to be a scene stealer nor is she my favorite character in the series I can’t really say that there is anything wrong with her. She’s just not really my kind of character.

Hinata is the main guy and his whole gimmick is that he’s really nice. He’s also the most popular kid in school because of how oblivious he is. The guy just wants to make everyone happy and fortunately for Hikage they seem to have a connection. He’s a little too oblivious though which holds him back a little. He really doesn’t notice what is going on around him and as a result is left in the dust at times. He should really have a clue as to what’s going on considering what he knows of Hikage but I suppose I should cut him some slack.

Then you have Teru who is Hinata’s best friend. Naturally that means he shouldn’t even try to start anything with Hikage because best friends don’t do that…right? It would be pretty sketchy and unfortunately the manga goes down that road which is unfortunate. I would have loved for Teru to have stayed as just a loyal friend to Hikage. It would have been a much nicer dynamic as well as a fresher one since the two main guys always happen to fall for the same person. This inevitably leads to a falling out between them which is unfortunate. I have to put all of the blame for this on Teru though. He gracefully chose not to pursue Hikage so to go back on that is basically a betrayal. I was disappointed in his character for doing something so underhanded.

As for Hikage’s online friends, they’re pretty reasonable. You’ve got Black Rabbit who is the nice one. He’s always encouraging Hikage and tries to keep her spirits up. Black Rabbit even gets a spinoff story at the end of the series where we see his point of view. Then you’ve got Mega Pig who is a little more direct and to the point. He wants to help Hikage as well, but speaks his mind and doesn’t beat around the bush. In general Mega Pig gives better advice even if it isn’t quite as calming. He tells you what you need to hear vs what you actually want to hear.

I Am Here isn’t a very subtle series though so you can probably guess most of what is going to happen right away. From all of the twists I’d say that only one of them really worked. One character’s plot didn’t end exactly like how I expected it to. For the rest this one is really going by the books which isn’t necessarily a bad thing. I’d say that the writing is pretty good here for the most part. You’ll be engaged enough to keep going and will want to see what happens next.

I also enjoyed the art for the series. It looks pretty clear and the artist doesn’t draw characters too similar in appearance so you don’t have to worry about mixing them up. That’s always the kind of thing that will make me drop the grade of the art. As it stands you won’t really have a problem trying to understand what will happen next.

The weakest part of the manga is definitely the romance though. First we have Hikage’s side of the story. She’s already with Hinata so as soon as Teru tries to get into the picture she should shut him down right away. In this case she was oblivious for most of it, but once she realized what was happening she should have flat out declined him. It may have made him sore for a while, but it was the right move. Then you have Teru who knew what he was doing from the start. He should have simply gave up on Hikage since he made his move way too late. Once the girl is taken that should be it. You can’t try to steal someone away. Even if you succeed you have to live with the fact that if you stole her away so easily then someone else can do the same. The only innocent one here is Hinata even if he’s fairly bland.

The plot of Hinata and Teru getting into it is also a bit iffy. They’ve been friends for ages so I like to think they should have figured out the plot a lot quicker than they did. I guess they were blinded by their emotions and all that but I feel like they still shouldn’t have jumped the gun this quickly. I suppose I should mention that there is a villain here. She tries her best to mess up Hikage’s life after being knocked out of the inner circle. It gets a little cheesy by the end, but I suppose she was a decent villain. Her plan may not have been amazing but it worked pretty well so you gotta give her some credit there.

Another thing I liked about the manga is that the classmates are actually realistic this time around. When they see that people are messing with Hikage later on they step in. They may not have done anything at first, but later on they are at least active participants. That’s a big upgrade from the usual guys who just stand around shaking their heads as things happen. These guys would actually talk even if they were super gullible during other scenes. 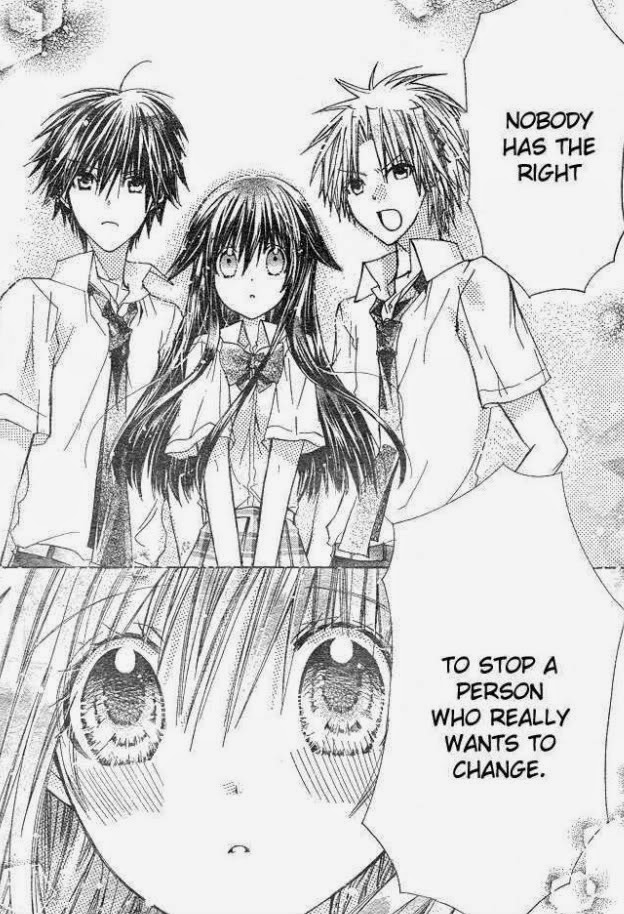 Overall, I Am Here is a decent manga. The romance definitely isn’t all that good, but otherwise it’s a decent story. It’s pretty short since there are only 2 volumes, but they’re large ones so a lot of content is still covered. I think the story would have been more interesting if it had gone in different directions but it is what it is. At the end of the day it still had an interesting dynamic with the online friends and there are enough unique aspects here to separate it from other Shojo titles. If it ever gets a sequel series I expect Hikage to take charge and be the confident lead she was meant to be.

2 thoughts on “I Am Here Review”