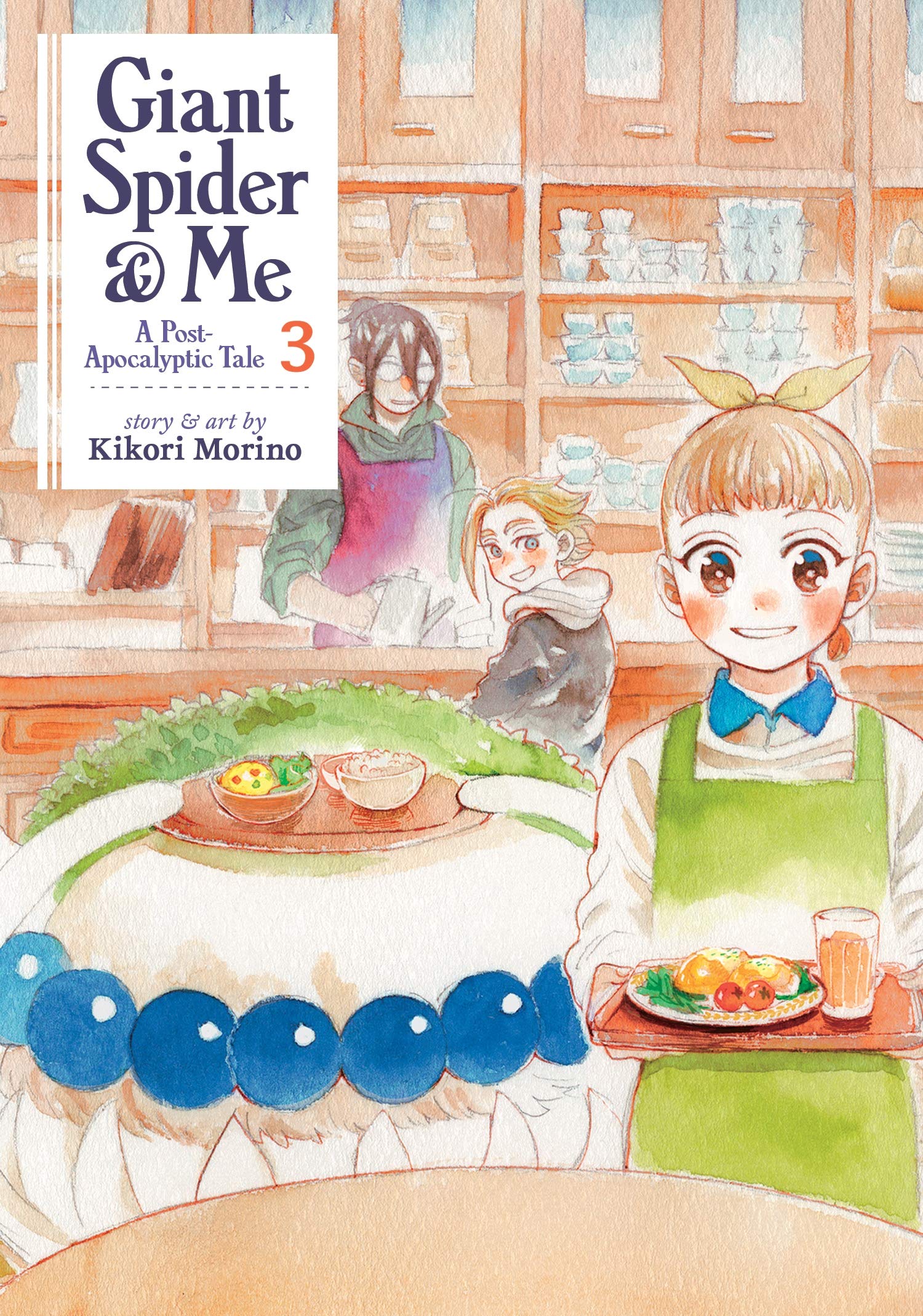 A while back I would have said I hadn’t read a whole lot of slice of life adventures like this one where it’s about a girl and her companion but now I’d say I’ve got a decent amount of those at the ready. This one ended up finishing sooner than most though as it’s only 3 volumes. It’s a fun little story that even throws in some cooking. There’s a solid story to be had here with fun enough characters and so it works well as something to read on the side. The cast is quite small so it is easy to see how it could do everything it wanted within the 3 volumes although of course I’d have been game with the series going on for a while longer.

The story starts by introducing us to Nagi. She is on her own own in an apocalyptic future and often gets lonely at her cabin. One day she meets up with a giant spider monster. For a brief moment she is afraid but quickly realizes that it means no harm and invites the Spider over. She names the creature Asa and gives her some Hot Chocolate/Coffee to try out. Asa is a big fan of drinks like this and so the two of them quickly bond over food. Nagi now has someone to cook for and Asa has a safe home on the inside. Their lives would be fairly perfect here except the townsfolk aren’t thrilled about having a giant monster around. Can Nagi convince them that Asa is friendly or are they going to attack anyway?

Since Nagi lives alone in a wood cabin on the outskirts of town it’s not like the civilians play a part immediately. That said, she does need to go into town to get supplies from time to time and that’s when they start making a fuss. Asa does look pretty scary to be sure but they take things too far as you would expect. We do get to meet some supporting characters as a result though and Nagi even gets to make a few new friends.

The first main supporting character would be the Carpenter. I’m not sure if her name was ever confirmed but she owns a little cafe that’s in a boat in the wilderness. As a result nobody ever visits the shop which discourages her but she tells Nagi that she does not want to move no matter what. Even if the place completely bombs she refuses to leave. It’s certainly a determined stance to take but Nagi agrees to help her out. In a way this is perfect since Nagi gets to cook a little extra now and practice on her technique. The carpenter is also quick to accept Asa as well.

Then you’ve got Belle and her father. Initially her father is definitely very concerned about Nagi’s pet spider but he gradually gets with the program. From all of the adults here I’d say that he was the most reasonable about this. Belle was also a tough customer to get on board but not so much because of the spider but just because Belle has a hard time just acting nice to people. By the end of the series though she’s probably Nagi’s best friend outside of Asa. She’s definitely a good ally to have. 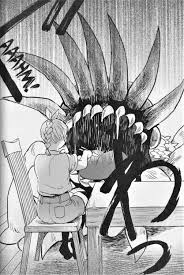 g
Then we’ve got Godot who’s the mayor of the town. After some convincing he is also on board with the heroes and someone that they can count on so that was fortunate. The only real obstacle in their way was a guy named Oleg who goes as far as to use Nagi as bait to lure out Asa and destroy him. It’s hard to ever like that guy even by the end because his steps were so drastic. if Asa was dangerous then he definitely put Nagi in harm’s way there. If Asa wasn’t dangerous then his whole plan was incredibly unnecessary as well. So no matter how you slice it, Oleg did not look very good here. Putting a kid in danger is just not the right play.

Meanwhile the cooking is always pretty fun. The manga really goes into detail on the meals that Nagi makes to the point where you could easily recreate these recipes on your own. A lot of them are classic meals you could make for lunch or dinner so you could even implement them right away. The author clearly likes Pumpkin a lot since most of the desserts use that in mind. I’m not a huge pumpkin fan but I would definitely give them a shot as well. The cooking angle is pretty fun and gives another layer to the general premise of the series.

While the term “Apocalyptic” is in the title the world doesn’t seem to be in very poor shape. We don’t see a whole lot of the world though since Nagi always stays at home or heads into town for supplies. The town looks good but it could also be that as soon as you leave the town then everything suddenly becomes bleak. The series isn’t really about this of course but it’s still a nice element to think of. After all, having your story take place during an apocalyptic time does at least subtly affect the context.

The art’s decent although I wouldn’t say it’s a standout or anything like that. It’s a little on the rough side but it’s going for a detailed look so all of the characters do look distinct. There’s a lot of effort put into the backgrounds and such. It may not make for the flashiest art to look at but you do get the gritty feel of the heroes trying to survive in a tough era. The foods also still look good. I could see the artist being really good at more of a horror title as well given that some of the visuals where Asa looks menacing tend to turn out really well. It’s also a nice way to show how scary Asa would look to an outsider.

You’ll definitely be blasting through this series pretty quick. Due to its nature of not having a big ongoing plot or many characters there isn’t a whole lot more to say about it. Asa’s design is pretty solid though. You can’t really go wrong with a giant spider like this. I definitely wouldn’t say there are even any negatives about it. The series serves its job well as a nice series in the day to day of Nagi’s life. It’s all about how a spider helped to turn things around and by the end of the series you know that she’s in good hands. 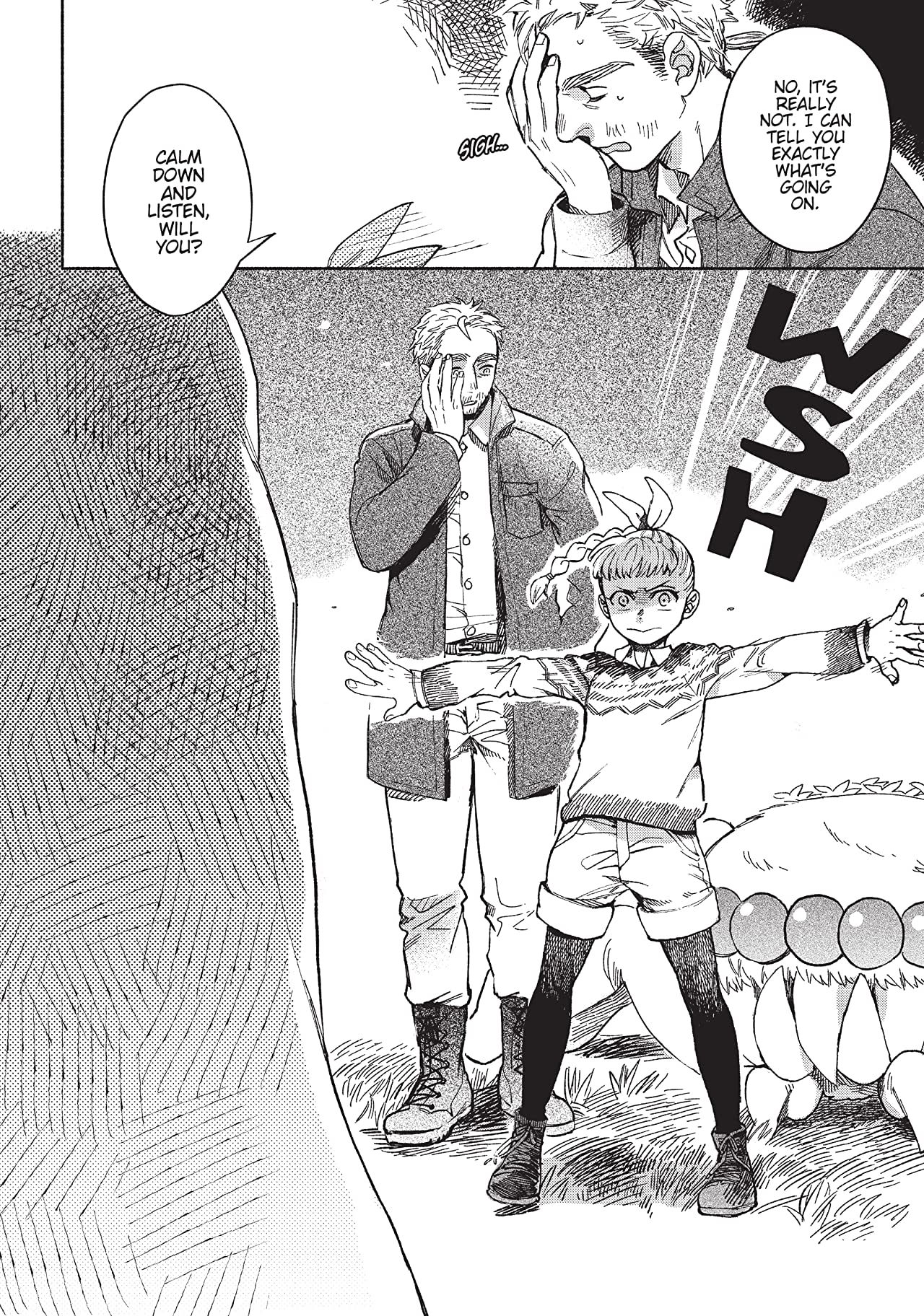 Overall, Giant Spider & Me is a fun little story. If you’re looking for a nice slice of life story to check out then this is a good one to read through. It’s a pleasant series about being able to make friends with a creature that most would find dangerous. The townsfolk are nice at the end and it’s good that Nagi has such supportive allies all around her. It reminds you that any animal can be an ally so long as you treat it right. Some pets definitely don’t seem as friendly as others of course but especially when they’re young any animal can be tamed. This doesn’t seem like the kind of story that would get a sequel but it would be fun if that ended up happening.