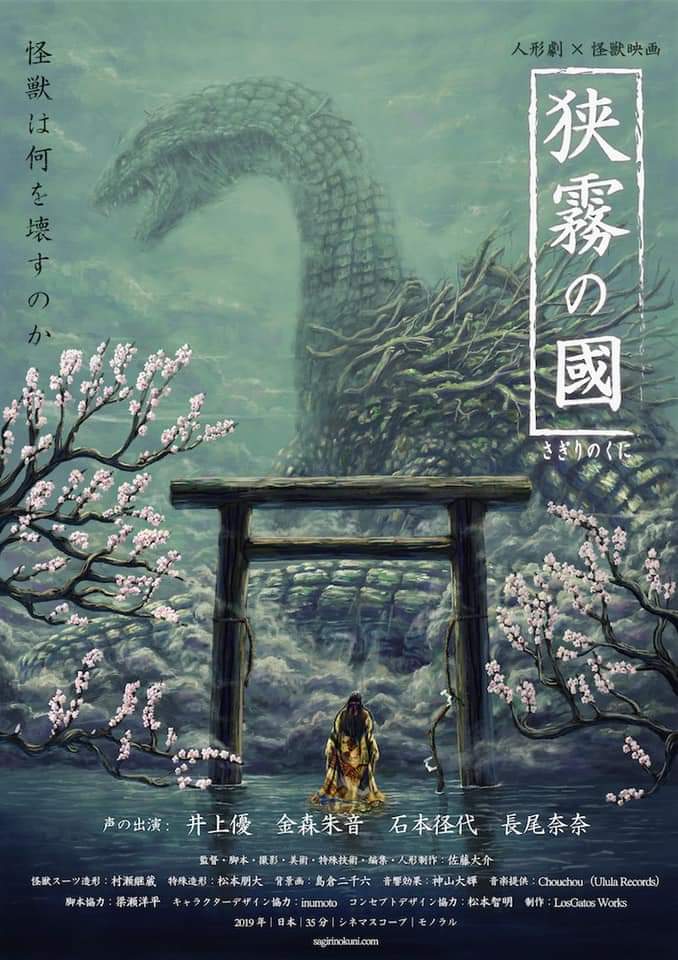 Well, this film was definitely not quite what I had imagined based on the title. It’s going for a very retro action figure type style. At first when you see the characters appear you’re wondering if maybe there was a budget issue so they had to use mannequins for the characters. Then it hits you that this is actually the style. I’m not a big fan of stop motion and it’s one of the animation styles I would put below CGI. It didn’t do the short film any favors this time around.

The movie introduces us to Eiji. He has moved back to his hometown after news came out that his brother had been destroyed. His cousin Takiri is there but she’s supposed to be dead so Eiji can’t mention that and his mother is also around. The biggest secret though is that they effectively have a secret Kaiju in the backyard. This will come in handy since a bunch of thugs are trying to force them off the land. When in doubt, it’s time to call in the Kaiju! Can this monster save the day?

Unfortunately the humans don’t make it easy on him. It’s always pretty annoying when the Kaiju is doing pretty well only for someone to say “Stop!!” and distract the Kaiju as he gets blasted by the villains. That happens here quite directly and unfortunately the Kaiju isn’t too durable this tie around. A quick shot is already able to deal some pretty decent damage to the point where the Kaiju nearly gets knocked out. It was concerning but the Kaiju has a lot of determination which is good.

The design’s not bad, I guess I would say it looks a lot like a Brontosaurus. It’s got a long neck and just has that kind of shape. While it doesn’t have Godzilla’s fire attacks, it does manage to use a heavy breath attack by inhaling the fumes. I wonder if that might have even been a tribute to the Atomic Breath given that it acts like true breath rather than an energy blast. It was cool to see though since it gives us some action.

So the movie isn’t very long at 35 minutes. It really picks up once the monster action gets going, but until you get there it does have some issues. It just feels like the movie isn’t very interesting without the Kaiju. You don’t really get to like any of the characters all that much and they don’t get to stand out with the brief time they have. When a film’s this short you really have to either develop the characters real quickly or you have to just focus on the Kaiju I suppose. The thing is, this is still more of a character driven story which is problematic when the characters have no time to be introduced.

For the first half you’ll probably end up being a little bored here. So you’re waiting for the second half which is more fun but it takes a little bit to get there when you compare it to the overall length of the movie. Finally, the animation itself gets in the way here. It’s just hard to find this style all that hype or engaging. If you’re a fan of the style then you’ll like it, but otherwise it’s just very jarring as you’re trying to get into the story. None of the effects look as real as you’d like.

This style really works when you throw a lot of humor into the mix. Think of Robot Chicken or something like that. The animation isn’t supposed to look great but you don’t really mind because you are laughing the whole time. That doesn’t work with this short because it is played 100% seriously. You won’t be grinning or smiling at any point because it’s not really that type of film. Unfortunately you can’t pull off a more serious type of story with this style or at least, it will be very difficult to do so.

Overall, Howl from Beyond the Fog is an interesting idea but this was just the wrong medium to do this. At its core it’s a story about a Kaiju living in the backwoods and defending the main characters from danger. It’s seen as a scary entity by most but the main characters know that it’s actually a good guy deep down. That’s a classic kind of story but one where you just aren’t able to get invested into this time. If we ever get a remake or something like that I think there would definitely be a lot of potential. Otherwise, I would say to pass on this one.