Reddit just sent out a 2021 recap which is pretty cool. It’s not huge but does have some fun little stats so I figure I’ll post them below with a little dialogue/commentary from yours truly. 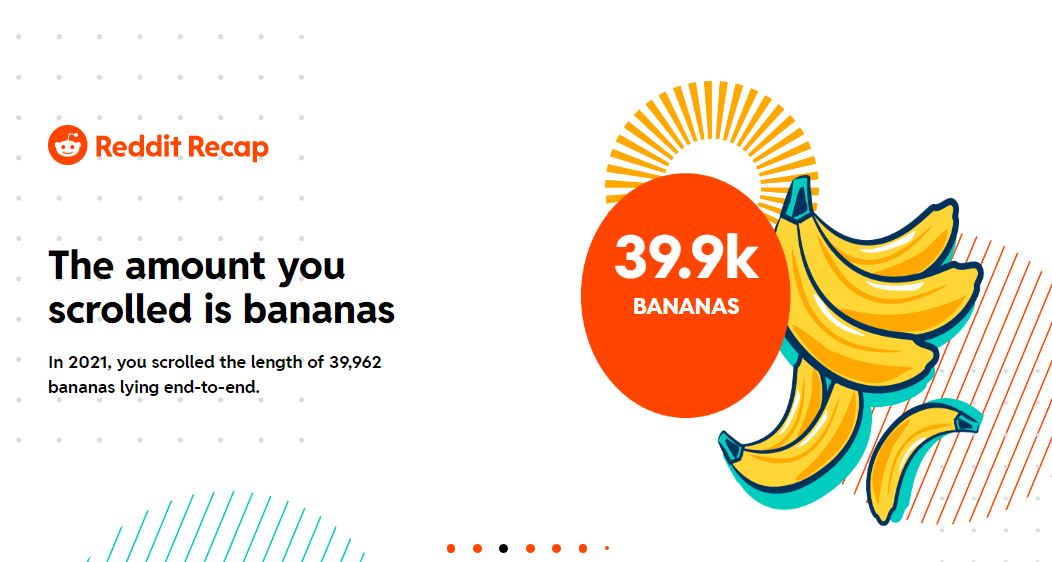 I admit that I’m not sure how that would translate into posts but it sure sounds like I was doing a lot of posting. Not surprising to be honest as I’m certainly on Reddit daily. There’s always something on there to post about. I still consider it to be the greatest site out there, you could wander Reddit for years and never get bored. 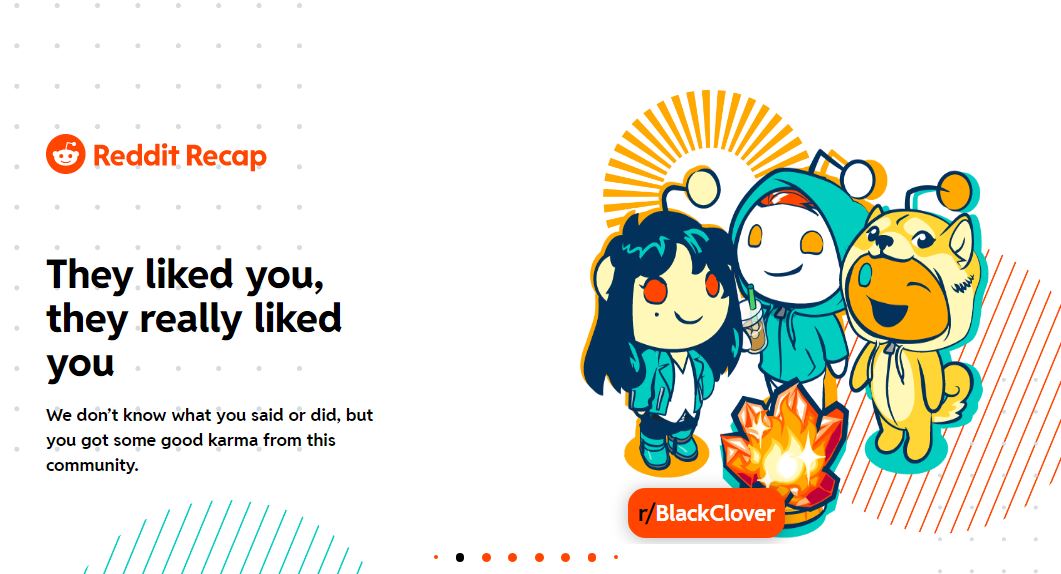 This is a cool stat. I’m not surprised that I had the best karma experience over on the Black Clover reddit. It’s a very relaxed and low key place to hang out. As with all Shonen Jump manga titles that are approaching what may be the final arc, you do see a lot more criticism of the current events but I would say the general tone is still positive here. I’m always up for talking about what’s going on and why Asta is the best main character of our generation. I’d recommend checking this reddit out for a fun time. 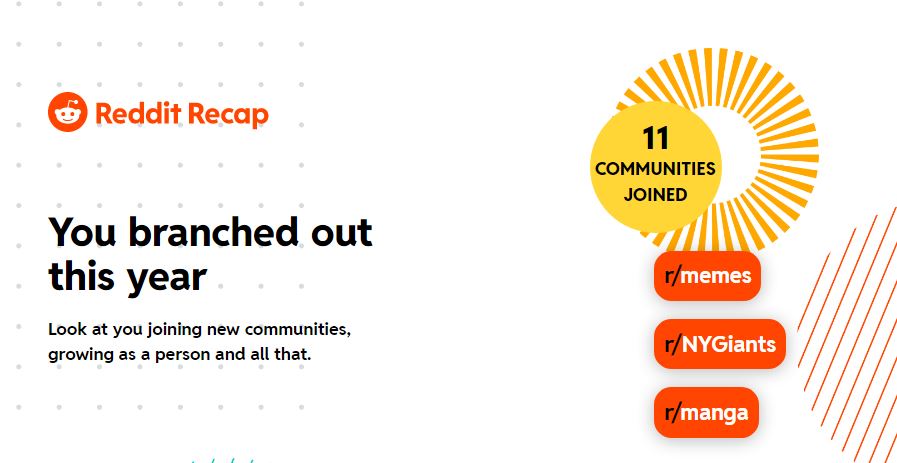 Joining a reddit is always fun since you’ll see posts from each one on occasion when you’re on the personalized main page. The memes reddit in particular has been a really fun one. There’s just so much cool stuff going on in there and always something funny each day. The manga reddit is cool when you see a title that you recognize although it’s mainly for obscure titles and one shots I’ve never heard of. I don’t remember joining the Giants reddit but I do poke my head around there to have some fun. 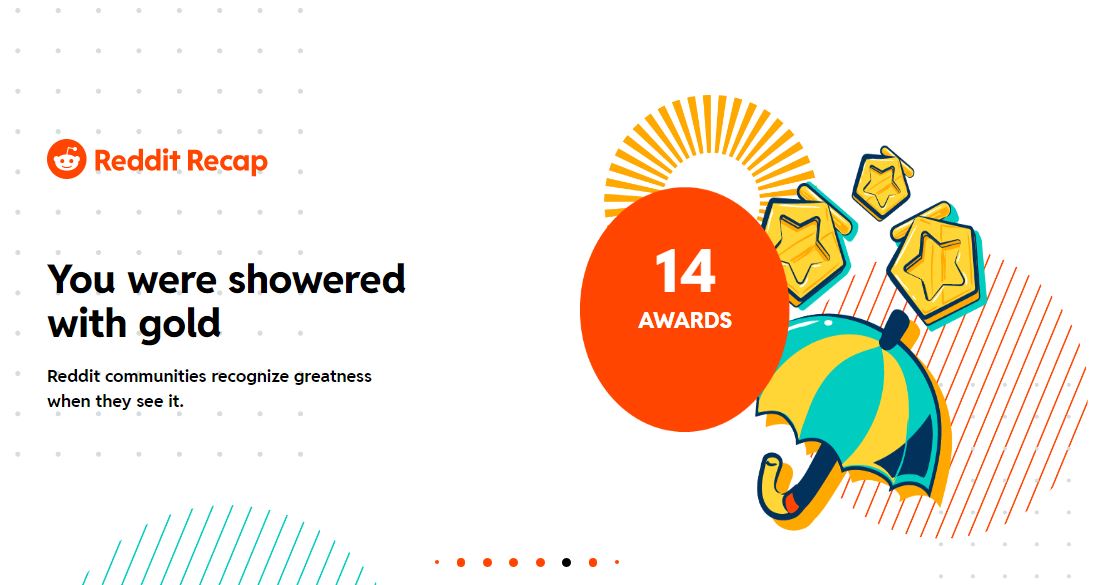 Obtaining 14 awards is pretty good. It definitely shows that my comments are really getting out there. I try to make sure I’m handing out the free awards I get too whenever I get them. No point in holding onto them right? There’s always a good comment in need of an award somewhere. 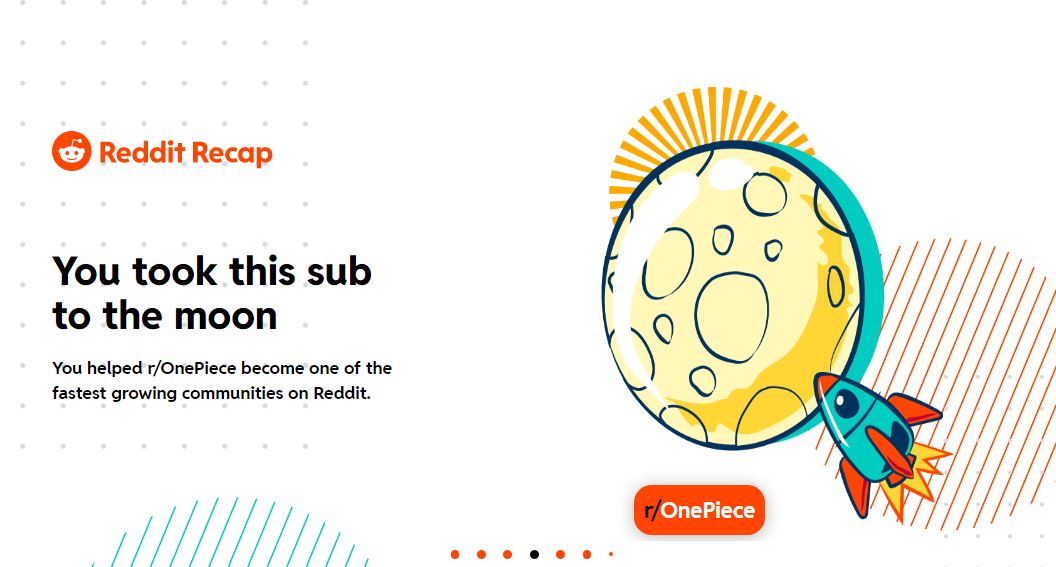 I definitely have to take full credit for getting the One Piece reddit out there. Without me, they would not have seen quite so many big threads like my Zoro vs Sanji thread and things like that. I’m always in there pointing out why Yamato is immensely powerful and things like that.

So I forgot that this was my top voted thread. That’s pretty cool, I was definitely having a bit of fun here with how Tower of God will discard even the most popular characters for years at a time. It’s been eons since we’ve seen Anak Jahad in the series and it’s too bad since she’s a lot of fun. I’m enjoying the current arc of course but due to where it takes place, we haven’t seen most of the main characters in a very long time now. With the arc not even close to being over, it’ll be a while before they return. I suppose people had some fun with this post.

For context, this post was about a Dolphins player named Waddle. In Fantasy Football he’s proven to be a real steal as the guy has been playing excellently throughout the season. He’s putting up high numbers but when people were saying that he was a WR1 I had to calm them down a bit with my comment here. It’s my highest voted comment of the year so the Reddit hivemind backed me up on this one. 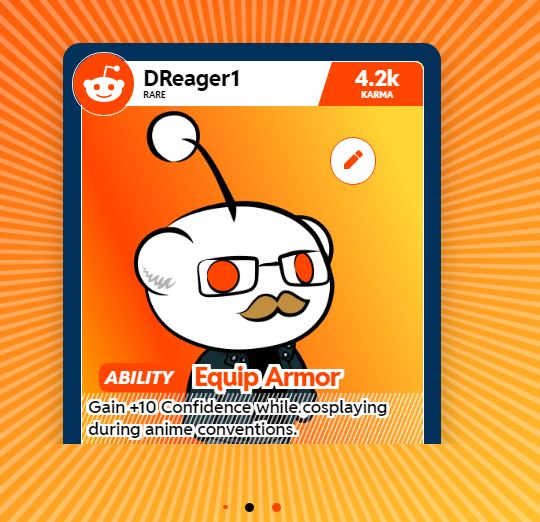 I’m at over 4000 Karma on Reddit right now which is cool. It’s pretty crazy considering how much Karma I spend on my hot takes every day. I’m not sure what metrics are used for the ability or if it’s random but that was definitely neat. 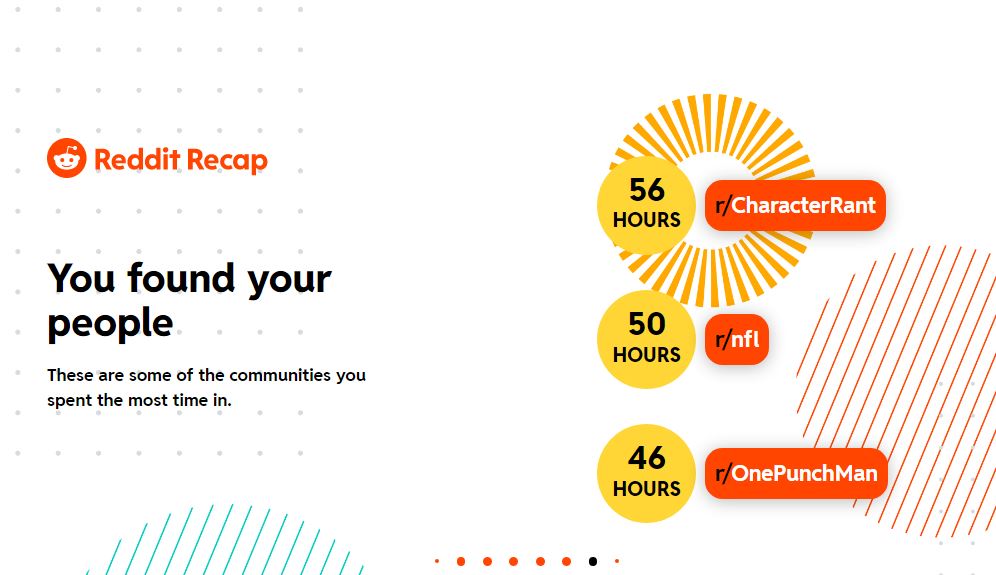 This was the most interesting stat to me. Finally seeing the Top 3 Reddits I spend time on was fascinating. I’m not surprised about Character Rants being at the top. That place is just a blast and you really see editorials on every possible franchise imaginable. It’s really a great place to visit if you want to see what people are thinking. It’s also a good place to find both positive and negative editorials about something in case you want to see both sides.

The NFL reddit is self explanatory as I’m often there seeing what the latest news is or just discussing the past games. For The One Punch Man reddit, I’m always running around in there in case a chapter drops early or something like that. I definitely don’t want to miss it and have to be ready at any time! 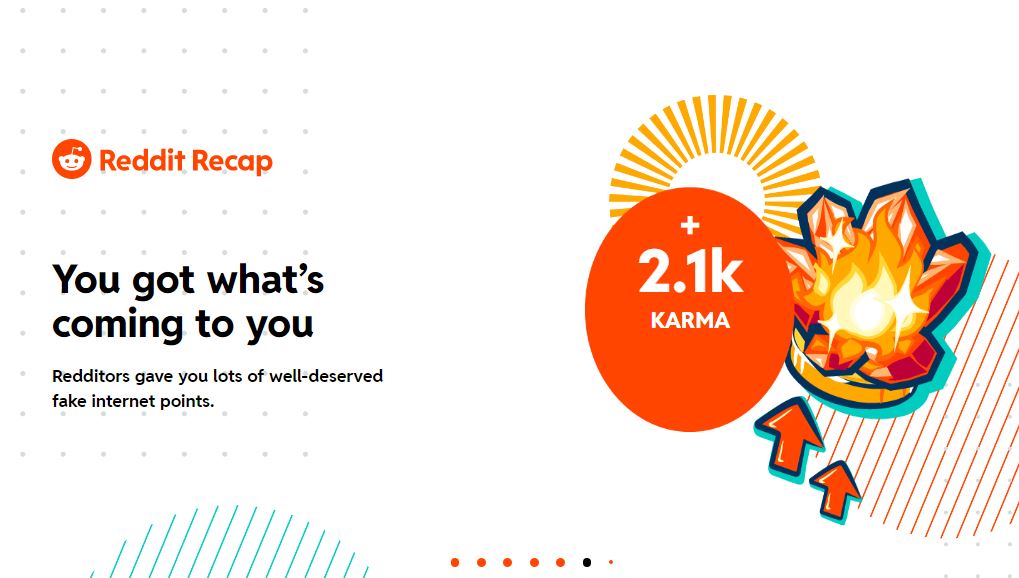 With 2K Karma this year I suppose I doubled it from how I was before. I wonder if that means I’m more active on Reddit than usual or just posting more. Either way it’s a fun stat and I hope they continue giving these out. I was always sad when WordPress stopped doing their annual recaps. 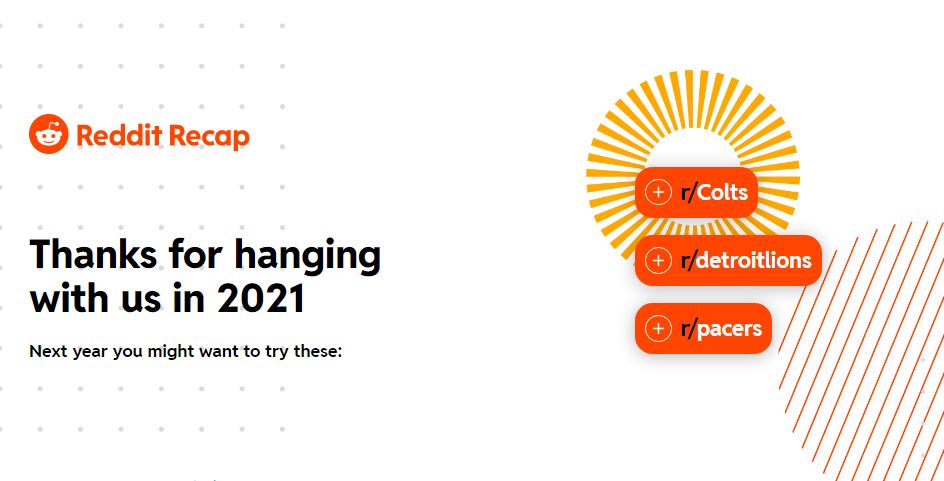 I’m not sure about their 3 recommendations to be honest. I think the Pacers are a hockey team or something…not sure to be honest but I’m not that interested. The Colts and Lions are okay I suppose, I’ll probably go into their reddits and have a bit of fun to support the suggestions. I think they need to refine the algorithms a bit and recommend some anime communities to me though!

So that’s my 2021 Reddit recap! Some pretty fun stuff in there and always good to see what’s been going on. Below I’ll link every thread I’ve created in 2021. I won’t count basic question threads or some of the food ones so I’ll mainly just be posting the full dialogue threads or fun ones. I’ll list the franchises these threads are for so beware of spoilers and do not click on the links above if any of these are things you are not current with. The links themselves have the sub reddit and title built in so that’s also a quick way to tell what’s going on.

McCarthy’s got to go from cowboys

This year is our year from cowboys

I’m seeing way too much Luffy disrespect here from OnePiece

I figured out who Blast is from OnePunchMan

Adam is honestly still the best character in RWBY from RWBY

Why does Orga get so much disrespect? from GODZILLA

Yoshi is a turtle? from Mario

What are your top 2/bottom 2 upset victories? from RWBY

From the characters who are presumed dead, who do you think has the greatest chance of coming back? from RWBY

The heroes are all going to die from OnePunchMan

PC Gamers: How do you find good games among the huge array of shovel ware? from AskReddit

Not going to talk about Kidd this time since he sucks but why do people act like Mihawk couldn’t 1 v 1 a Yonkou? from OnePiece

Bam, White, and Rachel would make the ultimate team from TowerofGod

Which company would you like to see animate Kaiju No 8? from KaijuNo8

Times have really changed from gaming

Do you guys think Tommy Teapot will return? from OnePiece

"Time to pull an all-nighter" from gaming

Where’s my Chorizo at? from Chipotle

How would you guys feel if Kafka dies in the next chapter? from KaijuNo8

Why does Kidd suck so much? from OnePiece

Is it fair to say that Saitama is absolutely being built up as one of the end game bosses? from OnePunchMan

How strong do you guys think Hatz is now? from TowerofGod

Zoro would crush Sanji from OnePiece

What If: Do the Whitebeard pirates save Ace if Whitebeard had the Gum-Gum Fruit instead of Quake? from OnePiece

What If scenario: Deku doesn’t let Eri go. Can he and Mirio survive? from BokuNoHeroAcademia

What if Yuno had stepped in against the Nobles? from BlackClover

How would you rank the Slayers and Candidates in terms of strength? from TowerofGod

Who do you guys think will be the final opponent for each of our main characters? from JuJutsuKaisen

Gojo hasn’t appeared in a while and suddenly we’re downplaying him? from JuJutsuKaisen

Will Yuno ever surpass Noelle? from BlackClover

What was Black Clover’s breakout moment for you? from BlackClover

Finalized version of the Uravity is the traitor theory from BokuNoHeroAcademia

When Kaisen comes back, which character do you want to get an update/mini arc on next? from JuJutsuKaisen

Do we all finally admit that Uravity is the traitor? from BokuNoHeroAcademia

Why isn’t anyone reading Candy Flurry? from CharacterRant

[discussion] Why does it seem like Eden Zero’s been stealing our thunder lately? from fairytail

Time to pack it up boys from ITellC

Who most deserves to defeat Kaido? from OnePiece

Yamato would have ended Marineford from OnePiece

Who are some good injured players that are worth grabbing right away? from fantasyfootball

I always see people saying to draft RB-WR rather than WR-RB. Why? from fantasyfootball

How we feeling guys? from CandyFlurry

Do people honestly think Marco could beat guys like Sanji, Zoro, Katakuri, and Luffy or are they trolling? from OnePiece

Shaq A Roni any good? from PapaJohns

Wanting to marry the princess and throwing pity parties does not make you a sympathetic villain! from CharacterRant

Yuki and Kyo are such wimps! from CharacterRant

George’s First day in the Navy from Jokes

Is Mihawk the strongest Swordsman in One Piece? from OnePiece

Batman is not a normal human from CharacterRant

Who was the best 1 man team? from baseball

Zoro will be the one to defeat Kaido from OnePiece

Spread out some cheese and salsa because it’s brisket time! from Chipotle

Yamato may actually be Joyboy from OnePiece

What do we do about Daniel Jones ROS? from fantasyfootball

What are we thinking about Kareem Hunt? from fantasyfootball

You wake up as Tony Romo at half time in the 2014 Divisional Round against the Packers. What do you do? from cowboys

"Is Noelle The Greatest Main Heroine of all time?" My response to this from BlackClover

Where’s the next chapter???? from OnePunchMan

This was a really ugly win from cowboys

I think Ace is actually alive from OnePiece

I’m getting real nervous about our Playoff chances from cowboys

Are we still defending Uravity? from BokuNoHeroAcademia

Would Zoro have killed Sanji if he was on Whole Cake Island? from OnePiece

When’s the next chapter coming out? from OnePunchMan

Is it fair to say that the Pre Arc is over and Eden Zero is about to truly start? from EdensZero

MVP candidates now that D. Henry is out? from nfl

Lets not get ahead of ourselves from cowboys