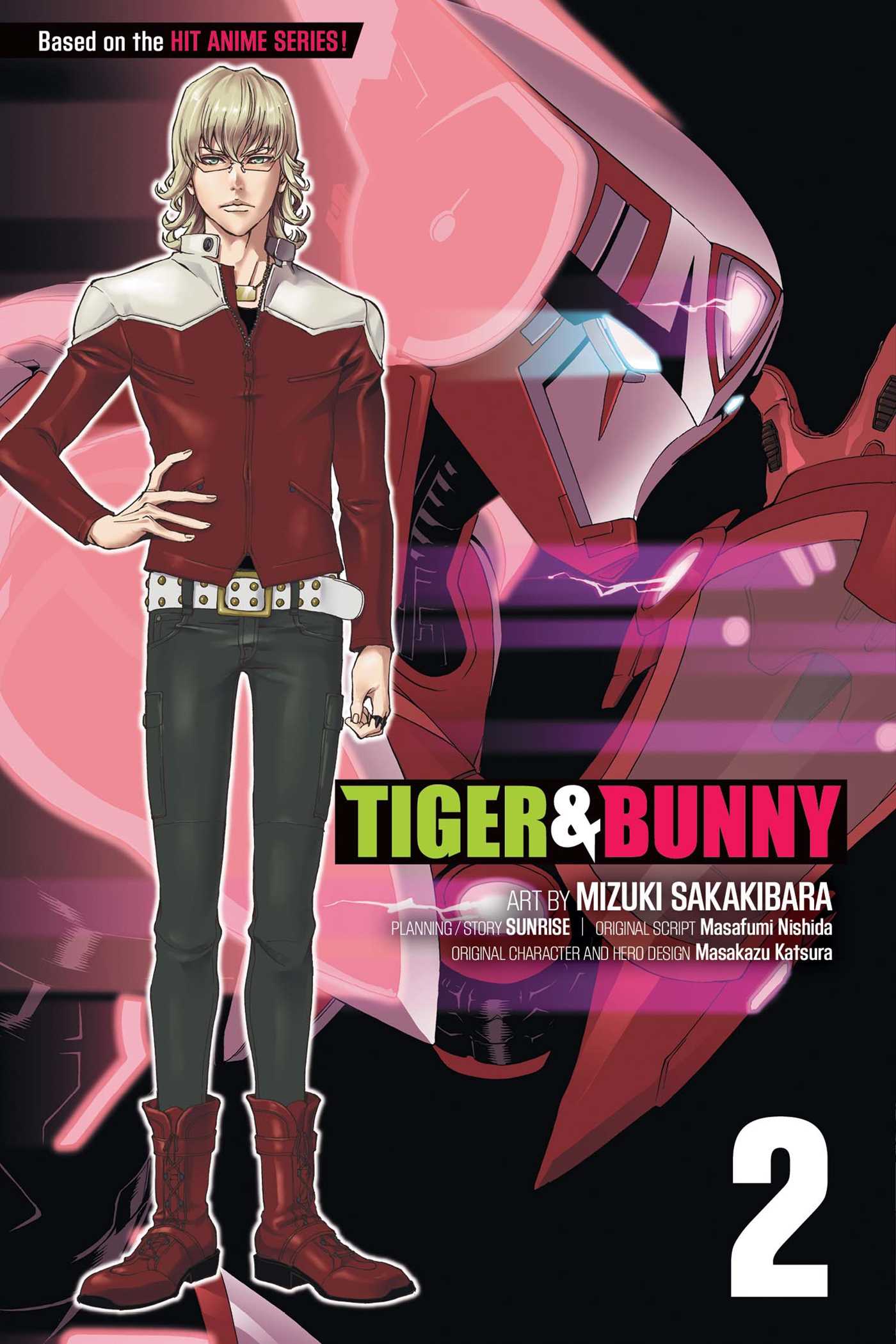 Now that I’ve reviewed the show, it’s time to look at the Tiger & Bunny manga. It’s fairly similar to the show but end a bit sooner and so it instead expands on the Jake arc. Some characters also get a bigger role like Cyclone and his old friend. All in all, you should like it about as well in terms of story as the show. The changes hold up and I wouldn’t say either version is weaker there. What helps the manga though is that the art is better than the show’s animation. I’m not saying that the art is amazing or anything like that as it can still feel like a tie-in at times and the suits tend to look the same but it’s easy enough to follow the action scenes. In the end, it works as a bit of an advantage compared to the show.

In case you haven’t seen the show though, here’s the general plot. We now live in a society where heroes are a very hot commodity. Most people are born with some level of super powers. They aren’t very strong but as a result you have a lot of people running around and using their powers for good and evil. There is a TV media company which thrives on this as they recruited various heroes to go around saving the day. You get points based on the civilians you save and other heroic conquests.

Tiger is an old school hero who believes that a true hero should defend the innocent and stop criminals. Not because of some kind of cash award or prestige but because it’s the right thing to do. This is definitely not the common mindset nowadays and Tiger is getting old so the bosses get him a partner. He’ll now be working with Bunny, a up and coming hero who has the same power set as Tiger. They both get super strength and speed for a limited time but it seems to be coincidental that they have the same power. They don’t really get along at all as their personalities are completely different but they will have to try and make it work. Bunny is haunted by the murder of his parents and Tiger needs to try and make some time to go and visit his daughter every once in a while. Can they really find time to also do their hero work while accomplishing their objective?

I always like the superhero stories so that was already a good point for this title. Tiger & Bunny isn’t trying to do anything super fancy with the plot, it’s just really embracing the heroics of the whole thing. As the series goes on Tiger gets Bunny to really be heroic as well. I wouldn’t say Bunny was a villain or anything but he was definitely obsessed with revenge and he had to be a top ranking hero in order to find out who the murderer was. So as a result he had to “play ball” and listen to the execs even when it wasn’t the most heroic thing to do. Tiger gradually gets Bunny to be just as headstrong as he is in saving people.

The two really have a solid dynamic going on the whole time. Tiger does test his partner by calling him Bunny a lot (His real name is Barnaby and he can’t stand the animal nickname) but at the end of the day it shows how they’re close. Tiger may be falling off in terms of power level a bit but he’s definitely a great team player and I could see him leading the heroes some day. He has a knack for always being in the right place at the right time and knows what each hero needs to hear in order to get back into the zone. Also, until his powers completely fall off, he is still stronger than the rest of the heroes by far so it’s still important to recognize that he’s a power hitter here.

Tiger just makes for a really solid main character. I also like Bunny quite a lot. His serious plot is always interesting to read and he’s a good foil to Tiger’s character. The series wouldn’t be the same without these two at the top. As with the show, there isn’t a lot of time for the other heroes but the series does its best to give them each at least one big moment. For example, Rock Bison actually gets a solid moment against Jake here. He holds off the villains long enough for Tiger to escape and even comes close to death at one point.

Rock actually got to show off his super strength which was really great because otherwise it felt like his reputation was just for show the whole time. I was pleased with this. Fire Emblem is still a character that can’t really be saved. I felt like the manga did reduce his screen time a bit though and he got to mess with Rock less but it still happens and each scene is still awful. I don’t know how this guy managed to become a pro hero.

Sky High doesn’t do a ton here but he is the top ranked hero so you have to give him his props. I still think his character holds a lot of untapped potential if the series ever wants to get into it. After all he’s a nice guy with good powers. That’s already some really solid stepping stones into being a major character with a full plot to himself right? Dragon Kid has the whole plot with her parents and gets to actively help in the Blue Angel plot where they are babysitting a kid. That mini arc was fun enough and they each got to have a decent role. Blue Angel doesn’t stand out a whole lot as the heroine but her plot of having to choose between being a singer or a hero is decent. I can also totally understand why the parents would be concerned about her being a hero since it is fairly dangerous. 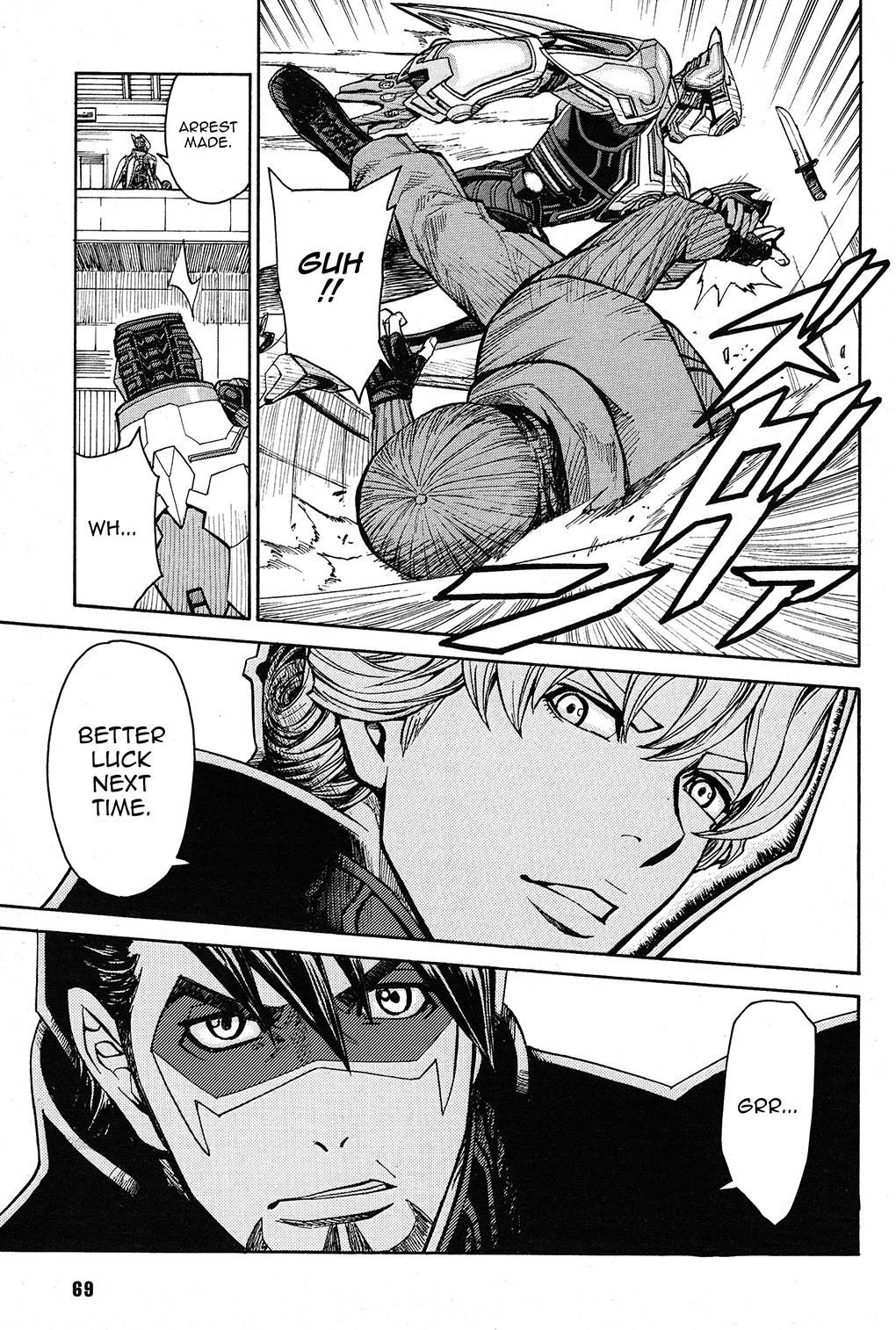 Now for Origami Cyclone, he gets a fairly big role like in the show. Additionally we actually get a little more to this in the manga as his friend Edward get a full redemption arc. While in the show he was mostly just a one off character to show Cyclone the darker path, here we get a lot more of his inner thoughts and goals. It was nice to see because I did like Edward back when he was a full hero. He just had a really rough break and it ended up completely destroying him. So at least this way there is still something of him left to keep on going. Then for Cyclone, I think this should be a good boost to his confidence as well.

I’d like Edward to become a main character for a future installment. It’s perfect if you ask me since the series needs another big hero. This guy could really hold his own in that role. The odds may not be amazing but I think it would be a really good option for the series to try and pull off. He’s a lot more interesting than the next generation cadets with their weak powers. Edward has at least proven himself in a real fight already.

As for the Jake arc, it’s definitely a solid one through and through. It’s fun to see him basically taking on the entire group of heroes tournament style. That’s a good way to not only test your own abilities but to also put the world on notice. It’s a lot easier to scare the world into thinking they can’t fight back against you if you take out all of their heroes first. After all, they were counting on the heroes to protect them so this is sort of like a wakeup call. Jake may not have been the most interesting villain but his powers were very dangerous and so he worked as an obstacle.

His sidekick Kriem was also good and stayed loyal to her duties throughout the series. Lunatic gets a bit of a smaller role here than in the anime or at leas it felt that way but he’s still the standout character. He’s doing his best to punish the villains for good and remove any heroes who are only in it for the fame and glory. He’s the kind of villain that’s easy to root for because he has an honor code and his own view of justice. It’s better than having a villain who is aimless.

It’s also easy to see why this kind of villain tends to be really popular. After all, he is making the world a safer place. Certainly in an unethical way which is why he has to be stopped but put yourself in the shoes of the average joe in this world. People with powers are always going around and throwing their weight but at the end of the day when someone breaks out of jail, you’re the one who feels the fear and takes in the damage. So when the villains are being destroyed, you know that you’re safer than you were before.

Objectively there are less murderers running around now so your quality of life improves. It’s why these villains are tough to stop as well since public opinion can quickly get behind them. There’s still a whole lot they can do with the Lunatic plot so I hope that continues. As it is, the world building was already really on point. This is the kind of title that could become a really big franchise if it wanted to.

I imagine most people who read the manga will have already watched the show but either way this stands up on its own. It may not cover everything but the series still did a good job of getting all of the critical moment. You’ll be able to follow the story all the way through. Hopefully they make the suits a little more different for a sequel though so it’s easier to follow each individual action. There’s never any real good reason for having multiple suits look the same. It’s the only real issue you can have with the Ultraman manga at times and at least there you could make the case that it’s because they all have designated costumes due to the crossover nature of the manga. 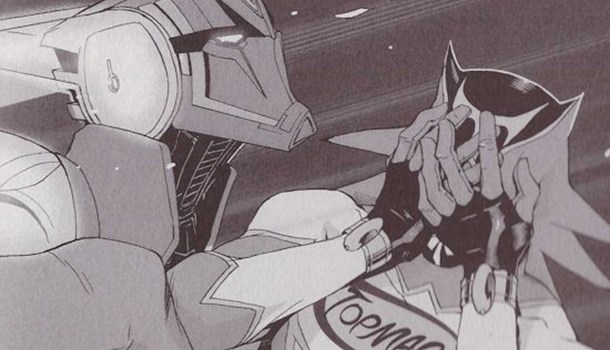 Overall, Tiger & Bunny is a fun manga adventure. It doesn’t go as far as the anime does but if you’re a manga only fan I would still say that the ending is fairly satisfying. Are there still open plot points? Yes, but what superhero story doesn’t have more things lined up for the future? The idea is that the adventure will always continue and from that point of view I thought it all worked out really nicely. You won’t regret checking this one out as it’s just a fun read.