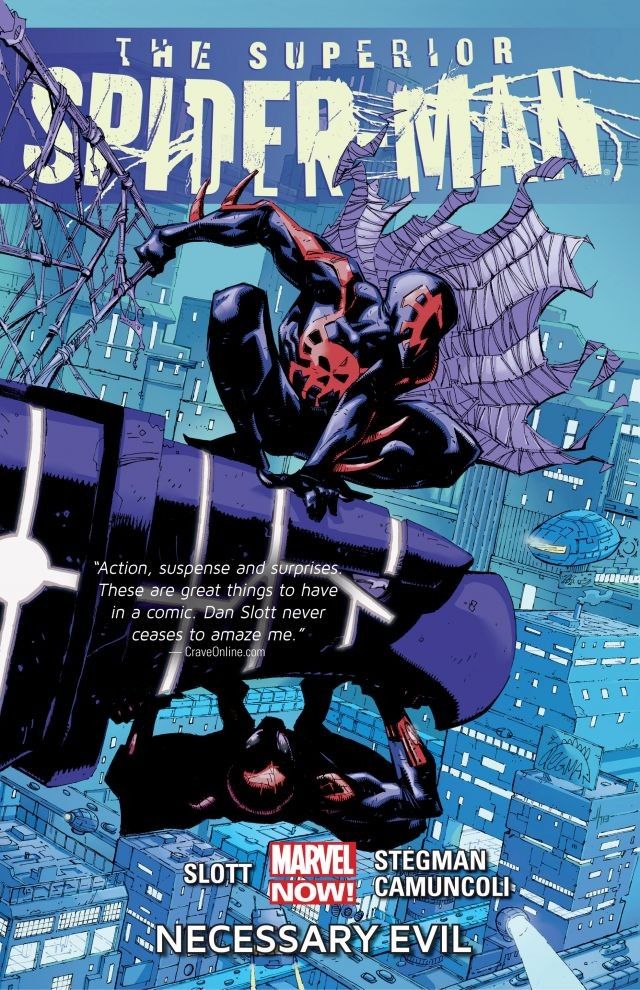 Looks like it is time to check out a volume in the Superior Spider Man run! That series definitely made a lot of waves back in the day and there was virtually no way that you wouldn’t have heard of it if you were following comics. After all, it was a big move to get rid of Peter Parker and have someone else put on the suit. Considering that Slott tried to make Peter as unlikable as possible before finally getting rid of him, Ock certainly did look good for a while. Of course, you do have to consider the fact that he’s not quite as heroic.

Things are going well for Ock. Life at Horizon Labs seems to be easy enough and he’s able to balance his civilian life with his hero one. That changes though when a time disturbance starts to shake up his life. Spider Man 2099 has arrived from the future and he needs to protect the man who is trying to ruin Ock’s reputation and the company that he’s in. Ock has vowed to end this threat once and for all, but now he’s going to have to go through another Spider Man to do this! Moreover, he’s still wrecking Peter’s relationship with Mary Jane while taking his life in a new direction. When and if (Heh heh) Parker returns, he’ll certainly be coming back to a rather chaotic life. Hey…at least he’ll have more money now!

Doc Ock is actually doing a reasonable job of keeping Peter’s life alive. Perhaps not socially, but definitely economically. Once Peter Industries manages to hit it off, Peter will be in the clear for quite a while. The stakes are high though as his Aunt’s friend has put a large investment into this and Ock has thrown in all of the money that he currently possesses. For a man of his brilliance though, this should not be a problem. (Of course, we know that Peter starts to mess this up in the ASM issues that are soon to come) Ock is also developing a strong bond with one of his friends and the romance is surprisingly gradual so far. It’s certainly much better than the romance that you will have come to expect from this title. It’s going to put Peter in a really bad spot soon, but Ock’s doing well with this.

On the iffy side, Ock is still not the law abiding citizen that Spider Man was. He doesn’t mind threatening people in public and doing whatever’s necessary to keep himself safe. Things get dangerous for him a few times, but he typically manages to solve everything in the end. He did die at one point though, but comic heroes can never die for long so he’s still in the clear. It is fun to see a bold Spider Man though so Ock’s change of pace is a good breath of fresh air. He’s completely confident in his abilities and he has certainly made many upgrades. Nobody will ever pass Peter as the definitive Spider Man, but Ock is certainly giving this his all. Even if nobody trusts him anymore.

Carly has a subplot as she finally realizes that Ock is posing as Peter. That’s impressive since she figured it out before all of the telepaths and metahumans on the blog. Unfortunately for her, she wrote it all down in a journal and didn’t make any copies of the pages. Now, the Goblin Gang has the info and you can be sure that they will be putting it to good use. I believe that their plot really starts to heat up in the next volume so they are mostly planning in this volume. Green Goblin is really kicking Hobgoblin around so you can tell who’s in charge. This makes sense though as Green Goblin has always been the bigger threat in the past.

One subplot that is also starting to form is the one that just ended with the Spider Wars. Morlun wants to destroy them all and a telepath/precog is trying to warn the humans, but nobody will listen. That’s some early setup though because the arc didn’t happen until quite a while from this arc. Slott certainly likes to plan ahead, which is good. It’s one of the few areas where I can safely say that the series succeeds. That Spider arc did get a lot of hype and supposedly it was actually a lot of fun. I can’t guarantee that I’ll be reading the actual event anytime soon, but something leading up to that isn’t out of the question.

Spider Man 2099 gets a big role during the first few comics of course and it’s always nice to see a familiar face. He doesn’t understand why Ock doesn’t recognize him thanks to the fact that Ock’s done a great job of taking over Peter’s body so we get the hero fight that we’ve been waiting for! 2099 actually does manage to put up some resistance, but it’s hard to gauge who had the upper hand since the fight is interrupted very quickly. Suffice to say, I’m confident that Ock would have ultimately win. Peter Parker’s body is simply a huge advantage and it’s not something that 2099 can overcome. 2099 did seem like a reasonably good character though and it is cool to see him stick around. That’s likely a bad thing for the future, but the Age of Heroes can always use another good fighter.

I feel like I should at least mention the fact that nobody knows that Ock has taken over Peter’s body to be a little iffy. I don’t care how complete the body switch is, there are tons of meta humans who should have noticed this by now. I feel bad for Peter since his friends didn’t do a great job of being observant. Imagine being stuck in limbo because nobody could tell that you weren’t in control of your body anymore. Spider Man’s personality is totally different, but almost no one even suspects that a change has occurred.

The art style is certainly still a mixed bag. The way that the faces are drawn is a little odd. It just feels sloppier than some of the other comics. On the bright side, the fight scenes still look really good. The art’s just a little slippery as the characters will get stretched out, but that doesn’t necessarily hurt the fight scenes. It’s certainly no Avengers or Justice League, but I suppose that the art will still get it done for you. It’s actually fairly unique at this point as one glance is enough to tell you that this is Slott’s work. (Slott isn’t the actual artist as far as I know, but this art style seems to always be with Slott in the Spider Man series)

Overall, Ock keeps squeaking by danger, but sooner or later it is going to catch up to him. When Peter comes back, he is definitely going to be in for some surprises. This comic may have been written by Slott, but it was actually good. It’s certainly much better than the Amazing Spider Man trade that I read a while back. The Superior Spider Man run was definitely an interesting one and Ock certainly isn’t like your average lead. He’s like the Punisher as it is hard to call him a hero, but he’ll still deal with the villains in his own way. It may not be heroic, but at least the city can rest easy for now. This is a quick collection to get through and aside from the 2099 arc, there’s a quick comic at the end where another villain shows up. We get to see some of the upgrades that Ock’s made to the suit. I recommend checking this out and Spider Man fans will be intrigued at the thought of Spider Man’s old enemy being behind the mask. 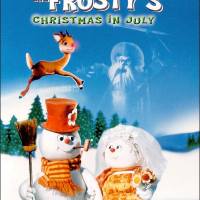