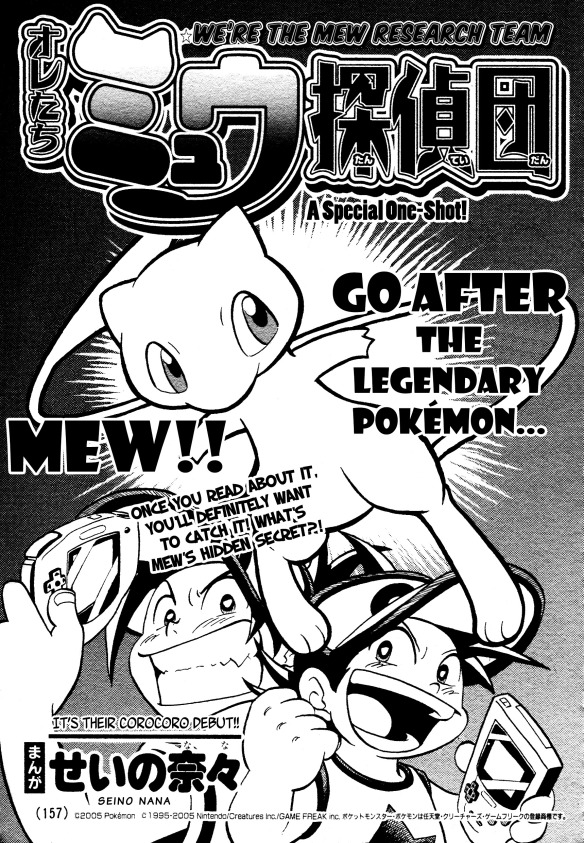 It’s time to look at a quick Pokemon one shot that came out. This manga is less than 30 pages long so there’s only so much that it can do. Of course, that also makes reviewing it pretty easy since I can just read the chapter and immediately review it afterwards. It does a good job of capturing the hype that we all felt when Mew was first released. I wasn’t even playing Pokemon seriously at the time and I can still feel the hype and the tension that was involved. The manga really goes for a lot of slapstick which can be trying for many, but it never goes too far into crude humor territory.

It starts out with a kid looking at his Pokedex and realizing that he has caught every Pokemon across Kanto, Johto, and Hoenn except for the legendary Mew. He wonders about this when Atsushi bursts through the store and decides to tell the kid about how Mew was first discovered. This leads to a flashback of 9 years ago where Atsushi and Gorita decided to compete over who could get the Pokemon first. They were each tied at 999 wins and 999 losses so this was the deal breaker. What we get after this is them using whatever means necessary to find out info about Mew. They run around town, ask locals about it, but nothing works. Finally, they hear that the latest issue of CoroCoro comics has news about it, but neither one of them has enough money to buy the issue. They are ultimately forced to put aside their differences to buy the issue. Sadly, neither one of them had the skills needed to get Mew because the only way was through codes from the magazine and you had to send them a letter. The deadline had expired by the time these two kids got to the store. (How long was that run? It seemed like the magazine had just come out according to the other kids so maybe the trip was a week or something)

Back in the present, Atsushi decides to fight the kid and reveals that while it took him 9 years, he still caught Mew first. He (probably) crushes the Rayquaza that the kid used and then goes back to bickering with Gorita. He hyped Mew up a lot though and reminded us that he can use any TM, which makes Mew quite the threat. He’s certainly not a Pokemon that you want to underestimate.

The story isn’t bad, but the characters are all pretty annoying. Rivalries between a kid and a bully are nothing new, but this one makes sure to exaggerate the facial expressions and chibi fighting to a whole new level. The characters can’t go a panel without throwing a punch or insulting each other. The bully even claims that the main character is the one who picks fights with him. I use the term “bully” loosely as the fighting seems to be completely fake. They’re just friends who are highly competitive and both of them love Pokemon. Of course, even 9 years later and they still can’t help but keep on trying to beat each other up. That’s just how it goes.

The art isn’t all that bad. It reminds me of the Pokemon Diamond and Pearl art. It uses a rather simple style that I can imagine any artist emulating. It’s certainly not all that good, but at least it’s easy to read. It would have been fun if this story had taken place in the Pokemon world, but I suppose it can be fun to read about Pokemon fans as well sometimes. I think this manga could have easily turned out to be a bad one if it was longer or if the art was worse, but as it stands, it is a decent way to spend 5 minutes. I don’t think it deserves a negative score at this point.

Overall, This probably isn’t a chapter that you will remember a year from now, but it’s not a bad one shot. If anything, it reminds you how overpowered Mew can be. The character’s Mew was only level 50 something and yet it was causing a lot of damage in the one panel that it appeared in. Mew’s always been a fun Pokemon although I consider Mewtwo to be a whole lot stronger. Now that’s one Pokemon that you definitely do not want to mess with. I certainly wouldn’t mind seeing more one shot titles to promote new Pokemon or other Nintendo games and events. For all I know, Japan does this sort of thing all the time and they just aren’t scanned all that often. It’s always fun to see a gem from the past. Who knows what will be scanned next? Whatever it is, I shall be waiting and ready for when it pops up! Now, back to Pokemon Go to catch me a Mewtwo one of these days!