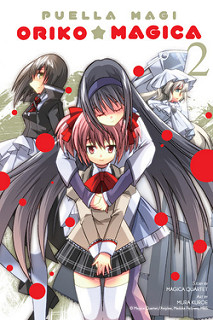 Well, it’s time to take a look at a short Madoka Magica What If story. Since Homura went back and forth in time to save Madoka so often, it makes sense that sometimes things would turn out very differently. This manga plays out like that as this universe has a new magical girl who can see the future and she decides to do something about it. Unfortunately, while the plot/concept are fairly good, the manga really fumbles the ball with the poor dialogue and really bad art. What should have been a home run knockout instead turns into a manga that just barely breaks even.

The plot involves three new characters who were made up for the series. Yuma is a girl whose parents were destroyed by a witch. Kyoko was able to vanquish it, but not in time to stop Yuma from being an orphan. As a result, Yuma tags along with Kyoko for a while and eventually becomes a magical girl with healing abilities. She makes for a good support fighter to have on the battlefield. Unfortunately, Kyoko then hears that someone is going around destroying magical girls so she sets off to stop this.

Meanwhile, Mami is actually the one who gets in on the action as she does a lot of sleuthing so Oriko deems her as a threat and sends Kirika to dispose of her. This will be a tough fight for Mami, but luckily Homura is also around and Kyoko manages to enter the fray as well. Can the classic Magical Girls defeat this pair of evil fighters or are they doomed in this timeline!?

Everything about this manga is a little off. Let’s go back to the art first since that’s probably the biggest issue here. It’s incredibly hard to see what’s happening during the fights. The art is all over the place and the character proportions don’t have any consistency. The facial expressions are downright crazy like one that I attached to the bottom. Homura’s face just makes no sense considering that she just blocked Kirika and is poised to win the fight. This is an issue that affects all of the characters throughout this two volume series. It’s so chaotic that it’s actually a lot clearer to read the series online since it is just one page at a time on a white canvass so everything is a lot easier to read through. Of course, this should never be necessary for a manga and still doesn’t make the actual quality any better. This is certainly a contender for worst artwork in a manga.

The pacing is also very odd. The first volume focuses almost completely on Kyoko and Yuma as they bond and fight witches together. It’s even mentioned by Kyoko that there are no other magical girls around since they’ve all been destroyed by the Magical Girl hunter. Then we cut away to Madoka’s town where there are Magical Girls everywhere. Mami just shows up out of nowhere and instantly becomes the main character for the second volume. Timeline-wise, this basically gets us to the start of the TV series except that Kyoko and Mami already know each other and Homura is a lot meaner than usual. In this timeline, Homura decided to be Madoka’s friend right from the get go and threatens anyone who even gets near them.

The tragic backstory for Yuma was also pretty unnecessary. She had bad parents which traumatized her as a kid so now she feels like everyone is going to abandon her. Yuma does a good job of coping with her powers and becoming a dependable ally at least. She ends up giving the heroes the pep talk that they needed to continue the fight. That being said, only having healing abilities is definitely a pretty big liability in a fight and I can’t say that I’m a huge fan of her design. Nonetheless, she’s not a bad filler character I suppose.

On the other hand, Kirika is a fairly underwhelming villain who isn’t really likable. She really wants to please Oriko and doesn’t really care to think about anything else. She forgets all other details because they apparently take up too much space in her mind. As a result, she’s the perfect killing machine for Oriko to use. Her abilities aren’t bad as she can slow down an opponent and has a lot of magical knives to use against her opponents. She nearly defeated Mami so that’s definitely a pretty impressive feat. It’s not enough to make her a good character though.

We’ve also got Oriko, who is the main villain here, but she’s no better either. She saw the future and immediately pulled a Bruce Wayne from Batman V Superman, but takes it to the next extreme. “Everyone has to die!!” is basically her view as all magical girls are far too dangerous since they can turn into Witches. I’m assuming that after she destroyed them all, she would end up destroying herself and Kirika as well. She’s very unhinged as the manga shows. Her power is basically precog and she has some exploding energy balls as well. She’s certainly not that great in a fight. I also don’t get why she encouraged Yuma to jump into the fray as that just adds another target for her to destroy, but maybe she just has fun this way.

As for the real characters, Madoka and Sayaka don’t really get to do anything in this version. Neither one of them has powers after all as Homura has gone to great lengths to ensure that they never get them. At least Madoka realizes that Homura isn’t helping the other heroes out and is only protecting Madoka so the heroine calls her out on it. This doesn’t work all that well though and then Madoka just walks into the battlefield to help out. This wasn’t her greatest plan, but she was a solid character as always. It’s certainly in character for her to try and help out.

Kyoko gets a rather large role as you would expect. She looks pretty good. Unfortunately, Kyoko never really gets to test her mettle against the villains, but I’d say that she would have held her own quite well. It’s definitely hinted that Mami and Homura are stronger, but being the third best isn’t all that bad. Getting depressed for a few pages after learning about the Witch revelation felt rather out of character though. It was pretty forced in there. While Kyoko isn’t good at being a nice person, at least she tried with Yuma.

I didn’t care for Mami in the TV show because she cracked under pressure and tried to murder the whole cast, but she did a good job here. As always, she also got depressed towards the end, but at least she was just willing to let her friends die and didn’t actively expedite the process. I know that strength shouldn’t really affect how much you like a character, but it really did help her case a lot when she was able to defeat Kirika. If she had lost that fight, I definitely would have been a little upset. As it stands, she did a good job of using strategy to claim victory and proved to be the second best character in the manga. The franchise really loves to hype her up as one of the strongest fighters, but I’d definitely say that Homura deserves the number 1 spot.

Naturally, Homura was my favorite character in the manga. She got a lot of hype from the villains since she already knows the truth about the Witches and has seen the end of the world multiple times. To Homura, this predicament is nothing new as she’s been through a lot over the years. Homura’s time stop ability is still super useful as well and I dare say that she probably would have been able to beat both villains on her own. I was hoping for more of a direct win without any help, but the end result was fine. This version of Homura definitely doesn’t mess around as she goes for the kill shot the instant that she sees the two villains and even tries to trick them by pretending to negotiate. Homura was really handled well although she was a little too drastic when Mami just tried to talk to her. Seriously, Homura spends about 90% of her time threatening or trying to destroy someone in this manga.

Unfortunately, the ending is quite bad. It’s not horrendous in part due to the fact that Homura is here so the ending has no real stakes. Had the series been longer or Homura was not in the equation, then I think the ending would have hurt the manga more. As it stands, it just doesn’t make much sense and I don’t like how it allowed Oriko to get one last laugh. There’s no way that this plan should have worked to even the slightest degree. Even Kyubei wasn’t too thrilled with how things played out and usually he’s grinning from ear to ear.

On the bright side, since this manga is only two volumes long it has to move at a very rapid pace. Volume 2 in particular feels like an abridged series as all of the characters just quickly meet up and get ready to rumble. It’s a lot better than the first volume if you ask me and if the series had kept going on for a while maybe it could have redeemed itself. Of course, the pacing may have been slower so the whole thing could have backfired instead. 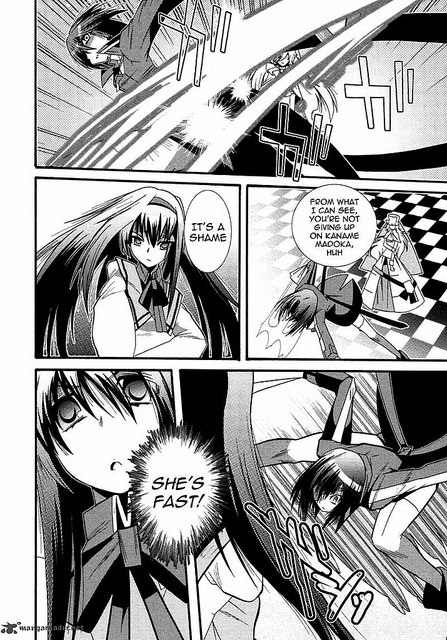 Overall, This manga spinoff wasn’t very good. There have been several titles that have come out for Madoka Magica and this one technically has one of the cooler sounding plots. Hopefully the others are better at the actual execution of it. Some of the other manga out there definitely sound promising and it wouldn’t be hard to top this one. The art is just so bad for this manga and the writing was sub par as well. Throw in the aspects that are Yuma’s random tragic past and the only thing that really keeps this manga together are the characters from the TV show. They’re still a lot of fun to follow and the action scenes were fun/hype even if they were hard to read at times. If you’re a big Madoka fan then I recommend this title since it’s great to see the cast in anything since the show was so short. It makes titles like this a lot easier to swallow since you’ll jump at anything. It’s why I want a big Madoka fighting game to help fill in this void. Ah well, just don’t go in expecting anything too good or you’ll be gravely disappointed. Keep your expectations tempered and you will have some fun with this manga.