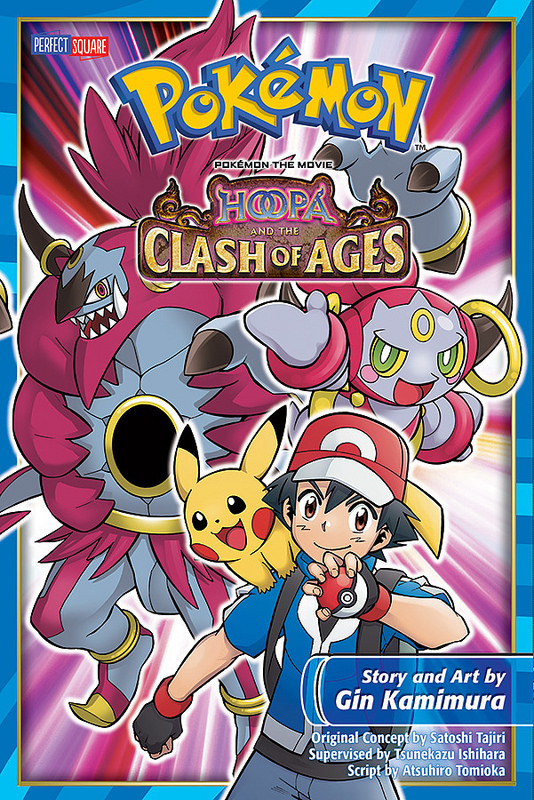 Considering that the Pokemon anime messed up big time and probably lost a lot of viewers, it is nice to go back to before that time and remember the more innocent days. This film is fairly recent so it isn’t that far back, but it still counts. The movie was fun although I didn’t care for Hoopa’s true form and didn’t like how they overhyped him the whole time. The manga does a great job of fixing that up although it feels super small, even for a one volume one shot. The whole film is being played on fast forward mode and the manga diverges a little bit for fun. It’s a fun little read.

Ash and friends are enjoying some donuts when Ash is thrown into a portal. He meets up with Hoopa and two guardians who have decided that it is time to bring him back to full power. Unfortunately, this causes Hoopa’s true form to go on a rampage as he starts to blow everything up and summons 6 Legendary Pokemon to defend himself. Ash grabs Pikachu and prepares for the fight of his life. He is aided by 3 Legendary Pokemon as well so now he is ready. Can Ash prove that he is the true Pokemon Master and take these clowns down? Time to find out!

One thing that this abridged version makes very clear is that the plot gets a little repetitive. Hoopa’s jar is broken so he turns evil at the very beginning of the volume, but the heroes quickly turn him back to normal. That’s good…but only a few pages later we see Meowth grab the jar and unleash Hoopa once again. In the film, there was a decent amount of fluff so this didn’t happen immediately, but the manga depicts just how quickly these two identical events occurred. It did help us get to the climax very quickly though so that’s always fun.

The original characters from the film were okay, but mostly just generic here. The two protectors remember happier times with Hoopa and one of them gets to help out a little during the climax, but that’s about it. In the end, it really came down to Ash and his friends to save the day as you may have expected. Hoopa wasn’t quite as charismatic as in the film, but he is still a decent Legendary. I still don’t like the Unbound form though. At least he makes for a good villain. I was also glad that the manga fixed some of my issues from the film regarding his power level. He was definitely very overhyped there, but in the manga version we see that Lugia was wrecking him. Had the fight continued on, I’m confident that Lugia would have won here. He had Hoopa on the defensive right from the start.

The 6 vs 3 fight of the Legendaries was also handled a lot better than in the anime. Who hasn’t wanted to see Rayquaza take on heavy weights like Dialga? I do think that the 6 evil Pokemon would have won in the end since the numbers advantage is important and Latias is fairly weak, but it would have been a good fight. Ash was around as well so his Pikachu can really tip the scales. I was satisfied with Ash’s portrayal here. He was eager to help Hoopa out and didn’t back down from a fight. He was even willing to get zapped by Pikachu in order to save the day. His friends felt forced in though and the classic “The future is now!” saying felt a little tacked on as well since it was a really odd way to start the sentence. Ah well, Ash will get new friends soon.

Now, the writing for the manga could be a little odd at times. At one point, Hoopa asked Ash what he would wish for so he could thank Ash. Ash responded with his wish to become a Pokemon Master, but after Hoopa offered to grant this to him, he quickly backpedaled and said that it couldn’t be done. He could have given Hoopa an actual wish or simply declined as he did in the movie. Another moment was when Hoopa told his Unbound version something. I’m going to quote the dialogue word for word so here goes.

Unbound- “You disappear…I am Hoopa. I will be…the one…who remains!” Hoopa- “Ashkan said…he wanted to help you too. I’ll tell you everything about me. So please…..calm down and listen…They’re all waiting for you….You and I should become one again. Hee hee, Surprised? You can have fun with them too!” Then Unbound turns good and the two of them merge. Not only did this conversation use the classic three dots…too often, but it didn’t make much sense. Hoopa said that he would tell Unbound all about himself, but then he didn’t. The conversation didn’t actually go anywhere. Maybe it was a bad translation or something, but the dialogue throughout the manga isn’t great. The other lines aren’t quite that bad at least, but it definitely is something.

The art is very clear at least. It’s not great art or anything as it stays very basic to make it look appealing. It’s good for kids since they can easily understand what is happening and I’ll definitely take this over vague artwork that you see from time to time, but it still didn’t feel really high quality. A good example of a great take on simple art is Bleach. That series got it down to a T.

Overall, This was a bit of a short review, but there isn’t a lot to say about this manga. It did a good job of covering the events from the film, but it probably should have been a little longer as everything was really glossed over. I am glad that the 6 vs 3 fight was extended a little though and it definitely shows that the author had his priorities straight. These one shot adventures are always fun and a great way for Pokemon fans to experience the movies in case they don’t have the opportunity to watch them. It’s a good adventure and while it is not great, you’ll have fun reading it. Even if you’ve never watched Pokemon before, this makes for a good story. After all, you won’t need any previous context to understand what is happening since it is all self contained.