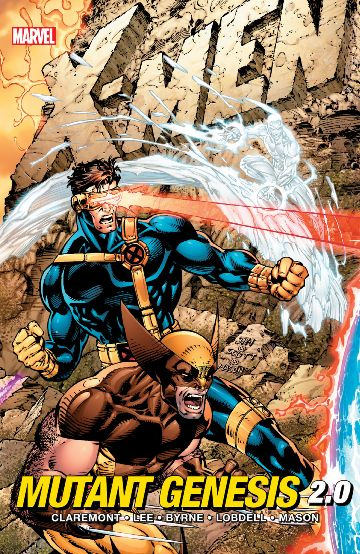 This X-Men review may have come out before a certain other one that I am reviewing soon, but I read it afterwards. I only mention this because I was really impressed with this comic for feeling like an X-Men title while the other did not. You’ll see that review soon, but this is exactly how I’d picture an X-Men comic to be. It definitely has a very 90’s feel to it and all of the characters are in their iconic designs. It’s the perfect jumping on point for new readers and it is also a very fun comic for experienced fans. It’s the beginning of a new chapter for the X-Men, but filled with a lot of familiar faces and action scenes.

The first arc deals with the return of Magneto. He had tried to retire from being a participant between mutants and humans, but trouble never seems to leave him alone. A group of mutants ask him for sanctuary and then they also want him to protect other mutants. Magneto decides to build an asteroid where mutants can live in peace. The rebels continue to cause mischief on the Earth and even though Magneto stops them, it puts him in a bad position. He’s seen as harboring criminals now and Magneto also has a nuclear deterrent, which worries people. The X-Men are sent in to put a stop to this before the government is forced to play their hand. Cyclops and Wolverine are among the members who are thrilled to take Magneto down. While Magneto had previously been a part of their team, you can tell that things had always been strained between them. Meanwhile, Rogue believes that there’s still a chance for Magneto to be a good guy.

It’s a fun story and I definitely remember Asteroid M quite well after watching the animated episode so many times. You do feel bad for Magneto to an extent as he is right that Wolverine went for the kill shot right away. You’d think that being comrades would mean something to him, but Wolverine was clearly quick to put Magneto on the side of evil once again. He does have to be stopped and the X-Men are in the right here, but they certainly weren’t very negotiable. Magneto being used by the people he was supposed to be protecting certainly did not help either. He was a little gullible here, but I’m sure that this will help him be more distant in the future.

Another issue is that Moira decided to mess around with Magneto’s DNA while he was a baby. It was an unfortunate move that also got the X-Men into even more trouble as it made Magneto very upset. He did trust the heroes as he was defenseless and had no choice. It was quite the betrayal and this plot will likely continue on in the future. It was a very long and tough week for Magneto so he wasn’t completely in his right mind by the end.

The other arc deals with Omega Red. He has been sent to eliminate Wolverine because Weapon X is never done with the poor guy. It’s personal for Wolverine so he wants to deal with this on his own, but the X-Men never back away from helping out a friend. The problem is that Omega Red is incredibly powerful and the only members who can really hurt him are typically taken down before they can do anything. This is going to require a team effort. There’s also a flashback which unfolds during the issue where we see Wolverine from back in his Weapon X days alongside Sabretooth and Maverick. It shows that Sabretooth is as corrupt as ever as he destroys the hostage to save himself. The whole mission was to save her, but Sabretooth blew it in an instant. Wolverine always wanted revenge for that, but he never got the chance. Well, Sabretooth’s here now so we’ll see if Wolverine does better in the rematch.

It’s a fun adventure and Wolverine has always been able to hold his own issue pretty well. He definitely spent most of the saga getting beaten up left and right though. He could probably beat Sabretooth in a one on one fight, but he was in a weakened state for most of it and Omega Red’s energy drain would cancel out the healing factor. If the full X-Men team hadn’t come along, it definitely would have been curtains for him. Still, I can see why the older members would be skeptical about Jubilee coming along. She nearly died quite a few times and I don’t thinks he’s quite ready for missions like this. Of course, having Psylocke as her guardian helps quite a bit with that since there are few warriors who are as skilled as she is.

Maverick was actually a highlight of this story and I liked him a lot more than I had expected. He was full of confidence and bravado the whole time. Even right before he is knocked out, Maverick has cool one liners like “Fine, this ought to take all of 2 seconds.” when asked to help out against Omega Red. The fight was over that quickly, but it was because he lost the fight. You have to admire the confidence though, not many “heroes” could pull that off convincingly. He’s no hero though as he is basically the Punisher and murders a bunch of people, but he’s a useful ally to have around.

Omega Red was a solid villain and he certainly was portrayed as a powerful opponent here. The Wolverine anime made him crazy strong while this one feels a little more accurate. He’s a deadly hunter who has been amped up with a lot of tech and energy draining equipment. It makes sense that he could give the whole team a run for their money. He’s an X-Men villain who is under explored and I’d like to see him appear more and get some more fights. He’s got a cool design and a nice power set to boot.

Sabretooth makes for a good opponent, but he’s not really my kind of villain. He is written better here than in a lot of his other appearances though, but it also reminds you why nobody should take him seriously when he tries to be a hero. Seriously, he’s way too far gone. As for the heroes, Jubilee and Storm are all right. They don’t get much of a role, but they are around the whole time. For most of the graphic novel, the X-Men team is split up into 3 mini groups. It just so happens that Storm’s gets a rather small role.

Cyclops is the solid leader that you would expect. He’s enthusiastic and a solid commander. I remember these days, when he was treated like Captain America. Now, he’s always either evil or extreme. I do like the modern take on the character, but I can also see why some people root for the reboots. It feels like we’ll never get back to these classic depictions otherwise. Wolverine is also great as always. He’s still my 2nd favorite X-Men member behind Cyclops. His eagerness to fight and solid overall skills make him a great fighter.

Gambit gets a lot of hype, but is still a very annoying character. His flirting will grate on you after a while and I feel like his hype never actually goes anywhere. Sure, he can beat the grunts, but he’s a little full of himself considering that he doesn’t do nearly as well against the big shots. You can tell that the writer does like him though as it is always hinted that Gambit has a shot. Psylocke is a cool member to have on the team and she’s always been like Elektra, but cooler. Her psychic abilities mixed in with her hand to hand mastery makes Psylocke a doubly threatening individual. Her illusions come in handy quite a few times.

If there’s any negative that I have with the comic, it’s the fact that the villains always go for the surprise kiss. It’s a rather annoying trope that luckily died out back in the day, but this comic was old enough to still have it. It’s when a villain shows up by kissing one of the heroines and then attacking. It happens twice here and was enough for me to dock a star off the score. Let’s face it, it’s a little annoying for fans of Jean Grey and Psylocke as they don’t even get to lose in a dignified way as a result. Psylocke gets her revenge, but it’s still a rather wince worthy moment.

Back to the positives. The art is very good and it makes for some crisp fight scenes. Even the generic ninjas look cool this time around. You’re not liable to forget much of the comic after reading because of how nice it looks visually and you can tell that a lot of effort went into this. I have to say that it looks far superior to any of the Marvel comics going on right now. It’s sad how art has dipped for the most part over there although there still are some nice looking comics. They just aren’t as widespread as they were in the 90’s.

Overall, This was a fun comic. Both of the sagas were good although the second one definitely wins. It was just more exciting and kept you at the edge of your seat. I speak comparatively though as both were quite engaging. This is a really fun start to the X-Men run and I can see why it is held with such acclaim. It just needs to watch the shock kisses and should also consider giving Gambit a smaller role. If it can do that, then I can only see this comic going up from here. I definitely recommend checking this out if you’re an X-Men fan and have not yet. If you simply like action comics, then this will certainly work for you as well.