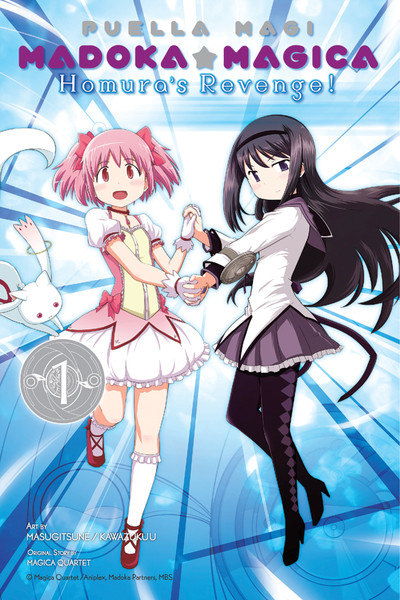 It’s time to check out another Madoka Magica manga title. I wasn’t crazy about the first two because the art wasn’t so good and the plot wasn’t the best. This one has a much better premise and the artwork has certainly improved, but it feels like the author is worried about doing anything too drastic. The series ends up feeling like a cop-out for several reasons and while the ending is mostly satisfying, there is one element that holds it back. That’s enough foreshadowing though, lets get into the review.

The series starts with Homura failing to save Madoka yet again. She’s been through this point in time on many occasions, but no matter what Homura does differently, it all ends up being futile. This time, she decides to take Madoka back in time with her. This way Madoka will remember everything that is going to happen as well as Homura so their chances to change the future should be drastically increased. Theoretically, this plan should be foolproof right? Unfortunately, Homura made the mistake of also bringing Kyubey into the past so he knows what is going to happen as well. It’ll be a battle of wits between them and being witty has always been one of Kyubey’s strengths.

Honestly I don’t think that Kyubey should have come along for the ride. This is where the cop-out part happens. The whole point of the series is that Homura and Madoka are going to try and change things so that they can save the future this time right? Well, they fail at every turn. Mami is still murdered by the demon, Sayaka is still turned to a witch, etc. They really didn’t change anything except for at the very end with Kyoko. They did beat the monster which at least made the future a bright one, but it wasn’t good enough for Homura or for myself. What’s the point of a what if story where only the ending is changed? I was expecting more drastic changes all around, but the heroes let Kyubey mess with them the whole time.

He was constantly messing with them and tricking all of the side characters. Everyone was unreasonable which ensured that nobody listened to Madoka or Homura. I also find it a little suspect how Mami was beaten twice. Surely she would have kept her guard up after almost being eaten the first time right? Mami is supposed to be super tough and all so she really shouldn’t have lost this battle. The manga even gave her some hype as usual by giving her the edge over Homura. I still say that Homura should be able to defeat her with time hax, but Mami’s abilities are certainly better when in close quarters combat.

The other iffy part was the ending. Homura explained that even though she saved the world and Madoka this time, she would go back in time because Madoka turned into a magical girl. That seems a little extreme since she actually managed to save the day after such a long period of trying. It seems to me like she would have been content to stay this time. Ah well, it was still a good ending though. For a while there is looked like the ending would have been another failed attempt and then Homura would have to head home by her lonesome.

As mentioned earlier, the art is definitely a lot sharper this time around. It feels more like how you’d expect the show to look in manga format. The fight scenes are a lot more engaging and it was fun to see some fights that never happened in the show like Kyoko and Sayaka vs Homura. Both of their battles were pretty fun and their plan actually wasn’t half bad. Overwhelming Homura with speed is the only way to really neutralize her time stop ability and preventing her from leaving is another good strategy. Of course, Homura could have stopped them easily if she was using fatal methods, but she couldn’t since she is technically a hero. The others never gave her much of a chance to explain herself though.

I have to say that Homura and Madoka’s plan wasn’t really well thought out. They should have approached Mami together as allies instead of allowing Mami to see Homura as an enemy. Their reasoning was that they should try to get everything to happen the same way so it’ll be easier to know when to diverge, but this reasoning didn’t make sense. It was an excuse for the author not to go down a very different path. The whole point of this manga is to try and go a different path so the series should have embraced this.

You can probably tell that I was less than pleased with how this was executed. Still, missed opportunities don’t make up the whole story in this adventure. It’s still a well written title on its own and the plot is engaging. It has some pretty good action scenes and the characters are likable enough. At the very least, I’d say that Homura and Kyoko are good. Mami comes across as a little arrogant and Sayaka is just gullible. Madoka isn’t all that helpful either the whole time and Kyubey makes for a good villain with how he pushes everyone around. At only 2 volumes long, the series goes by in a flash. The pacing is never a problem and the series gets from point to point with ease.

I also just enjoy the Madoka universe so seeing the characters was fun. The atmosphere was pretty tense and the characters were all pretty serious. I could definitely see this being turned into an anime or maybe some kind of OVA. I’d take it, even if just to see Homura wreck Kyoko and Sayaka. We really needed that fight in the anime, but there’s only so much you can do in 12 episodes.

After reading the manga, it’s safe to say that the power levels are: Madoka>Homura>Mami>Kyoko>Sayaka. Now, Homura and Mami are debatable I suppose since Mami does have a lot of experience and her abilities are a nice counter to Homura’s, but they only work if she is able to land a hit before time is stopped. I don’t see that happening. Meanwhile, Kyoko’s abilities are just a poor match up for Mami’s to start with and Sayaka is just the weakest by far. She doesn’t have a lot of experience and while her regeneration is great, it does consume energy so she can’t keep it up. Each member is pretty strong in her own way though which is what makes the team so formidable. What I really want is a series where we can see the whole group team up against an enemy. That’s what I need to see and that’s why we need a manga that introduces Dark Magical Girls. The other manga title came close, but didn’t go all the way. (I’m sensing a trend here eh?) Bringing that in could make for a definitive Madoka Magica series someday. 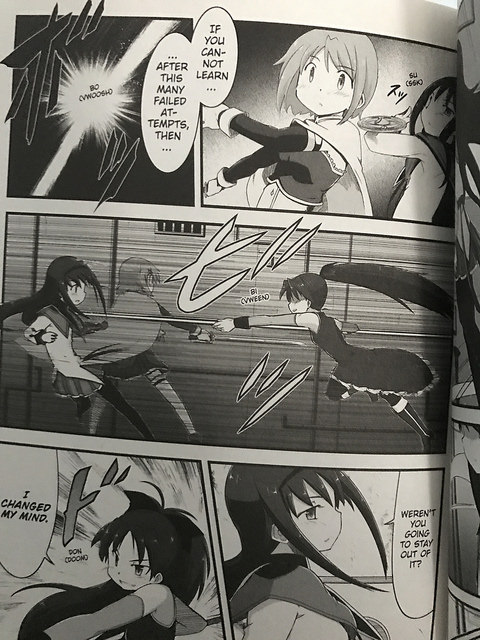 Overall, It’s a clear improvement over the last manga. There aren’t any new characters this time around, but the TV show was already interesting enough where a What If story is certainly welcome. There are many ways that the show could have gone after all even if this one didn’t actually step into any of those paths. I’d definitely recommend checking this out if you want to read a nice little action story. If you haven’t watched the TV show then you may not really get what is happening at some points, but you should be able to understand enough. If anything, the added mystery could help make the series more enticing to you. At this point, we just need a season 2 so there will be more material and these spinoffs can think up more adventures for the main cast. It’s been quite a while so there is no excuse not to have a second season by now.