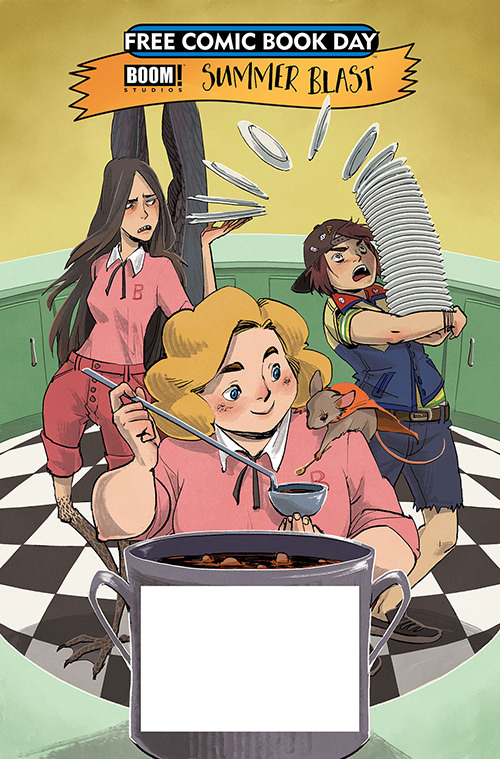 I always leave this one for last because it doesn’t look very interesting. I’m not a big fan of anthologies in general either so mixing these two elements together is a nice recipe for disaster. Still, maybe it would surprise me right? The first story certainly didn’t as we start the comic off on a low note. The plot is that a mouse wants to leave his village because he’s curious and a wise animal tells him about how everyone who crosses the woods…dies! Cats live out there after all and mice can’t do anything about it. Ah well, the mouse decides not to cross. The art was pretty bad and the story tried to be rather gritty and serious. No fun was to be had here and I certainly won’t be checking out the trade.

The next story was about a girl who is opening up a restaurant in monster world. Unfortunately, nobody wants to help her except a very entitles monster who doesn’t care about the business. She just wants the paycheck and isn’t afraid to say it. Again, the art is very underwhelming and I don’t see this series being very fun. None of the characters are likable and the premise will get old after the first few pages. It’s easy to see why so many comics are cancelled before they really got to run. They just never had a chance in the first place.

The final story is about a band. They were in a mysterious car accident where one member died, 3 were seriously injured, and one emerged unscathed. We then jump forward a year and the group is still playing. I guess this mystery will be addressed at some point, but I can’t say that I’m intrigued. The big problem in the issue for the characters is that they have to play in the same concert as the Boneheads. The groups don’t get along and a lot of insults are hurled from one side to the other. Great. The art’s pretty bad as per usual. We also get a gritty story about kids being drowned for no reason and all of the characters are incredibly bad. This isn’t a good recipe for success either so for those reasons I’m out. Unexpected Shark Tank reference

Overall, Boom lived down to my expectations as always. If there’s one thing you can count on from this free comic, it’s consistency. The only good thing I can think of in this comic is the Pac-Man image on the wall in the final story. I gotta admit, that was pretty classy. Still, there’s no reason to read this issue since you won’t be checking out any of the 3 series anyway. You should just get going while you can and stick to Marvel/DC for now. If you want to branch out, then read some old Mega Man or Sonic comics since both of those aren’t exactly hitting it big at the moment.