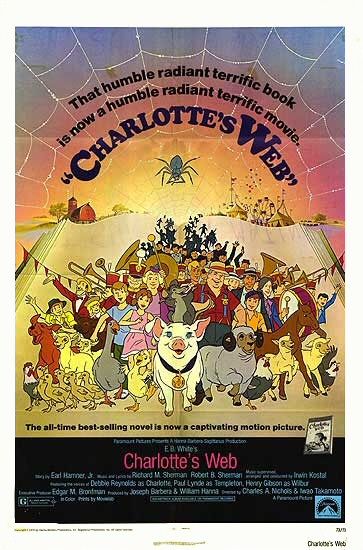 It’s time for a classic film which touched upon some pretty tricky themes like death and how we all grow up. The film is rather somber and the first time I saw it I apparently gave the film a score of 2/10. Watching it again, the film is better than I remembered it to be. Sure, the film probably would have gotten a 2 if Fern had not stopped her father in time. Luckily, she saved Wilbur as well as the film in one shot. That was definitely pretty impressive of her. I suspect you must have heard of this film over the years, but if not, here’s the story.

Wilbur is a small pig and as such, he has a hard time getting any food during the day. His owner decides that they should eat Wilbur as soon as possible since it has been a while since he had any meat. Fortunately, his daughter Fern saves him. Wilbur then meets a spider named Charlotte who decides to help ensure Wilbur’s permanent safety. She uses her web skills to write words down and gives Wilbur all the credit. This saves Wilbur from imminent destruction and allows him to have time to grow naturally. Now Wilbur is a hero, but Charlotte starts to get sick. Will she live long enough to see him get the glory?

I don’t think spoilers really exist for this film since it’s such a classic, but I’ll give you time to leave. I did mention the whole death theme and all..but pretend you didn’t hear that. All right, well the tragic part of the story is that Charlotte dies. It’s a shame since she was probably the best character here by a landslide. Not saying the other characters weren’t good of course, but she stole the show. She definitely saved Wilbur’s bacon with her web tricks and was pivotal in the film. She also doesn’t put up with any wisecracks and nearly murders the rat, Templeton.

Templeton is a fairly likable character as well. His personality is the polar opposite though as he’s not a very nice guy and only helps out when there is something in it for him. He’s not sympathetic to anyone’s cause and just looks for his next meal. He’s a pragmatic guy I suppose, but also a downer. He’s more charismatic than Wilbur though. Despite being the main character, it’s hard to like the Pig. He actually faints from shock on more than once occasion. I’ll admit that I actually forgot that part so it was intriguing to see first hand. Wilbur doesn’t take any of his trials well and just keeps on fainting and taking more losses. He also does make a lot of noise for his animal neighbors so I can see why they were getting upset as well. He’d cry all night long and run around like crazy during the day. Certainly a realistic neighbor I’d say.

Fern is the only human character to actually get a role and she doesn’t appear much after the opening act. It was cool that she let Wilbur live in the house for a while, but a shame that he was kicked out before long. Trust me, the other human characters were absolutely terrible the whole time. It’s just impossible to like them and they seem to get worse and worse with every scene. Fortunately, the reporters weren’t as nosy as usual and nobody tried to stay at the farm after hours. They would have learned the deadly secret of Charlotte’s above average intellect. Having a short life while living on the farm is probably a good thing.

The animation is pretty good and probably a little nostalgic as well. You can tell that the animation is a little old of course, but it holds up well. Perhaps not quite as well as the Snow White film despite that one being older, but it hits enough of the right notes. I have no real complaints with the animation except possibly for the various liquids. The water and such just don’t look right for some reason, but I couldn’t quite identify why. It’s a super minor thing though.

I’m typically not a big fan of films taking place on farms. I prefer city landscapes on principle and I also just get wary when animals are all around. It just doesn’t bode well for a movie most of the time. This film did a good job of dodging that issue so that was a good thing. It’s an enjoyable ride and is probably did one of the best jobs of showcasing death for an animal without getting gritty or unnecessary. Naturally I would have preferred if Charlotte had lived, but it could have been a whole lot worse.

Overall, Charlotte’s Web is a good film. It might not be the most fun one out there because of all the somber scenes throughout, but it’s definitely not bad. There’s a good amount of replay value here, especially considering that I’ve seen it quite a few times. The writing is good as well and I always have to take a double look at the pancakes during the beginning of the film. They look mighty crispy and I could use a few myself right now. It’s been even longer since I saw the sequel so I can’t really comment on how that one holds up, but this is a film that you shouldn’t miss.