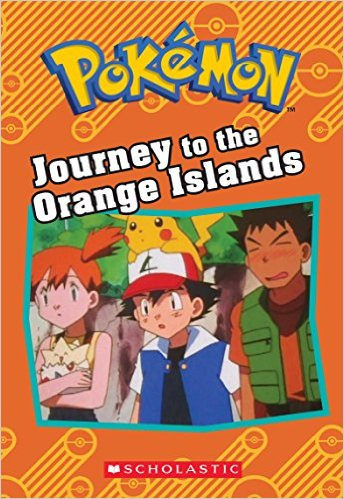 It’s time for another quick Pokemon chapter book. This one brings us back to the beginning of the Orange Island adventures. Ash may have conquered the Pokemon League or at least that’s what you’d assume from how he talks about it in this book, but there is a new challenge around the corner that he cannot resist. Before starting the tournament he runs into a Lapras who is in need or a rescue and a Professor who may be in over her head with research. Ash is ready to save them all, but can he also stop Team Rocket from kidnapping Pikachu?

It’s always nostalgic to take a look at the good ole days of Pokemon. The newer adventures are fun enough (Although Sun and Moon is a downgrade) but the classics are classic for a reason. It’s great to see Ash just show up and take down 3 bullies in a single blow. He didn’t have time for one liners or panic attacks, Ash just got the job done. That’s why he’s the hero of legends. Ash doesn’t play games when it comes to cleaning up shop and I wouldn’t expect him too. Ash is also pretty straight forward here as he openly cringes depending on the situation. I’m not kidding, on page 2 he cringed and that’s when I knew that I was in for quite the ride. It was a good way to start things off.

There are really two main adventures here although they continue into each other pretty seamlessly. The first adventure has the kids stop by Professor Ivy’s lab to pick up the GS ball. For some reason it is impervious to teleportation so they are supposed to bring it to Professor Oak. Brock decides to stay with Ivy so he can become an official Pokemon breeder. Ash and Misty are pretty okay with this and head off, but Team Rocket tricks them and they get launched pretty far away. That’s when Ash notices the bullies and takes them down. A kid named Tracy shows up to join the crew and Oak allows Ash to forget about the GS ball so he can just have fun entering the league. Oak’s a pretty nice guy. The adventure is On!

Naturally this was a pretty big moment in the anime since Brock had been around for so many episodes. That being said, he was always the worst of Ash’s friends as he never kept his head in the game and was always holding the team back. He may have been the team’s cook, but I couldn’t get around to missing him. His replacement wasn’t exactly a fan favorite though as Tracy can be extreme in his own way. He notices some kids bullying Lapras and decides not to do anything about it because he’s busy sketching. That’s very shady right off the bat and he basically forced his way into Ash’s inner circle. Ash was totally against having Tracy on board but the decision was taken out of his hands. It was all pretty sudden. Tracy will have some work to do to get past his initial appearance and since he isn’t much of a fighter, that’ll be tough. Misty doesn’t do much here, but I’m sure she’ll have more of a role in the next few volumes…possibly. Technically Ash’s Pikachu is really the only Pokemon to get a big role. Ash doesn’t even use his others. Jigglypuff looks pretty good as she shows up to take names. I really miss the days when she would come out of the blue and just start singing. That was a quality running gag.

One thing I have to wonder is if the author has to recap what everything is at the beginning of every book or just for each region. For example, we’re reminded what a Pokedex is and the author describes everything as if we’re seeing it for the first time. The book’s fairly short and even then these scenes are really quick, but it does seem like you’ll lose valuable page space this way. In the end, I have no real complaints with the pacing though. The book flies by and it’s an engaging read from cover to cover. If I had any small complaint, it would be that this book is light on action. Pikachu’s one hit win and Geodude’s one hit win were basically the only battles in the book. Props to Team Rocket for tricking the heroes the same way twice in a row. Since the book cuts out the filler it almost literally occurs back to back. At least Ash didn’t go down without yelling for his food first.

Overall, This was a good volume of Pokemon. It could get a little dark like with the Lapras chapter and it’s easy to forget that the stakes used to be so high. Even Ivy almost died because of Pokemon spores gone wild. I have a feeling they’ve been nerfed to just knock you out in newer episodes. That being said, Ash is even more intense than usual in this volume and it’s just nice to have the old gang back. The show really had a lot of depth and emotion at this point. I still prefer almost all of the other regions to Orange Islands, but I like to just think of them as the lost episodes of Kanto. Think of it like an epilogue story and it works a whole lot better. No Gary this time, but he’ll return soon enough. If you haven’t read the book yet, now’s a good time to do so. It’s a pretty nice way to read through two episodes and it covers all of the important parts so it’s a quicker way of getting caught up with the anime.