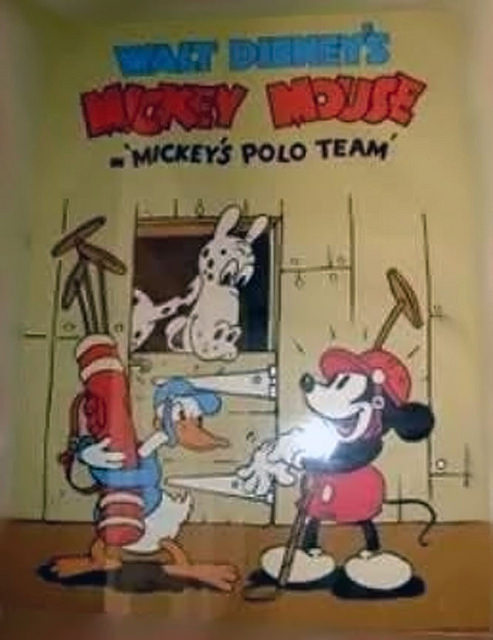 All right, I got to see a Mickey special!…sorta. Well, we’ve finally branched away from Donald and Chip, but the special wasn’t what I expected it to be. It’s basically a 4 on 4 competition of Polo Ball between Team Disney and Team Live Action. The plot is basically just seeing which team will claim victory. Technically it’s a great plot with lots of potential and I love a good sports showdown. The special just did something that I was really not expecting and I’m not sure that it worked so well. It decided to give the humans just as much of a role as the real characters and it may have even been bigger.

Here’s where things got a little tricky for me. There are a bunch of characters on screen so I’m thinking I misread the rules at the beginning and there are more teams or they just look too similar. It feels like a bunch of guys are running around the court and Disney’s side has not teamwork. Donald gets completely destroyed by one of the humans as he is humiliated and beaten up quite a bit. I felt bad for him since Donald losing to the Chipmunks is one thing, but losing to an annoying comic relief character? I don’t know about that. The game doesn’t really end so at least you can say that Donald’s opponent didn’t win, but it’s an empty consolation.

As I mentioned, the others just don’t get much of a role. Mickey is here in the match but you would barely know it from watching the special. He is permanently relegated to side character status and might not even get a line. The rest of Team Disney is completely forgotten. It might help if I liked the humans of course, but not really. I’m still just wondering what the point of them was the entire time. It’s not that their gags are bad although they definitely aren’t as good as the Disney ones, but they feel incredibly out of place. It would be like suddenly including the Disney characters in an episode of the Brady Bunch and suddenly they’re the focus of the episode. It’s strange.

At the very least, I can say that the end was actually really good. It had a pretty good twist as the Donkeys decided to turn the tables on the humans. As I was on team Donkey from the start, it was good to see them get the props. It’s what I’d call a really happy ending and does give the special an extra point. I think if they make a sequel special I’d definitely want them to follow up on the ending. It just makes sense and I think people could get behind that. That or let Donald just clobber everyone.

Overall, I’m not sure about this special. It was certainly pretty weird and unexpected. I think they should have played it straight with just the Disney characters having a sport competition. Hopefully we still get that somewhere down the line. I suppose I’d recommend it, but don’t go into the special with big hopes. Think of it like a spinoff special that isn’t really about the Disney characters. Perhaps it is better on a second watch, but I’d definitely say that it is one of the weakest specials from these classics.