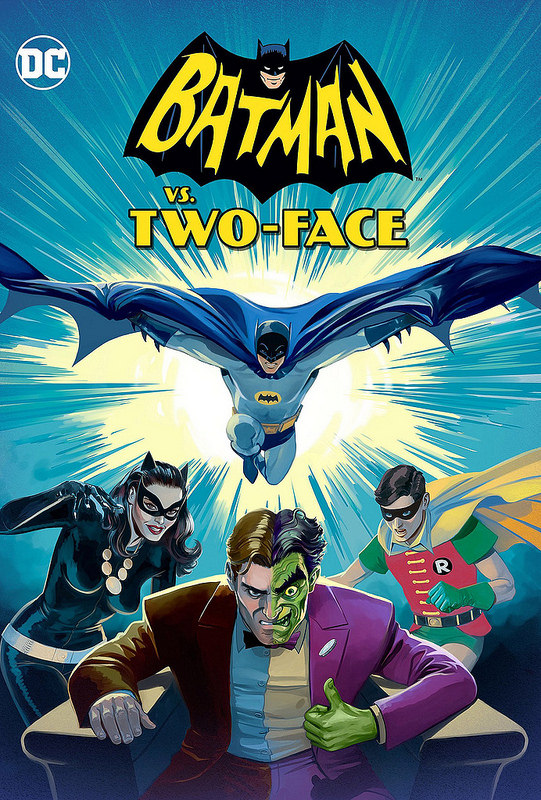 Adam West really had a good run as Batman. His TV show was very successful to the point where we now have comics and movies being released to ride the nostalgia. They’ve been handled very well and while I wasn’t thrilled with how the first film made Batman evil, this one suffers from no such issue. Considering that it’s likely the final Batman movie with this iconic lead, it’s a great way to go out. The film is really well made and balances the humor and action pretty well. It’s a movie that I can easily recommend to any comic fan or moviegoer.

The film starts off by adapting the classic Two Face origin story. Hugo Strange built a device to suck the evil out of all the villains, but it wasn’t stable so some of the residue got on Harvey Dent. This transformed him into the legendary villain and in a surprise twist he is defeated by Batman and Robin during the opening montage. We skip ahead a little while as there are multiple time skips in the intro of the film. Harvey Dent has been cured and rehabilitated. He has to slowly work up the ranks once again, but vows to keep bringing criminals to justice. At first everything seems to be okay, but then Two Face pops up once again. Batman doesn’t believe that it is Harvey, but Robin believes that Bruce is not able to see the truth that is right in front of him because of his friendship with Dent. However, Robin is not impartial either as he wants to put Dent away since he feels like his friendship to Bruce is now playing second fiddle. Tensions are high!

Two Face is a likable villain from the start. He’s cool as Harvey Dent and as Two Face. As Dent he is a charismatic guy who always takes command of the situation and doesn’t back down from the hero types. Even when Robin tries to intimidate him he comes up with quick counters like Robin’s bed time. It was a great comeback and I wouldn’t want him to try and play nice when the other guy is being mean. Dent also looks really good in the court room and even intimidates Batman which was an intense moment. As Two Face his voice may not have the same impact, but his character is still the same. The coin gimmick is always pretty solid and he’s just an interesting character. Two Face never feels like he’s overstayed his welcome and he is certainly a threat since even his underlings are a match for Batman and Robin. In the Batman ’66 universe, it’s safe to say that he is Batman’s greatest foe. The other villains have been reduced to guinea pigs for Hugo Strange’s experiments.

Batman is a great hero as always. His voice perfectly suits the character and he is shown to be a genius. Batman picks up on all of the clues right away and puts justice above all else. Now when it comes to combat you can tell that Batman is getting older. He has a hard time against paid goons and must get captured almost 10 times in the film when you consider the opening montage. He definitely would have benefitted from a little more prep time in this case. He still has a lot of great gadgets as always though so Batman is still prepared. He handled the evil Robin plot pretty well as to be expected.

Robin spends most of the film being jealous of Harvey. This is good in the sense that Robin gets to throw a lot more burns Harvey’s way as a result and even follows him into an abandoned warehouse by his lonesome. THe downside of this is that Robin is the one who usually ends up getting burned and the whole situation doesn’t go well for him at all. He just seems out of his league the whole time and definitely will have to keep training if he wants to be on Batman’s level. The evil Robin plot was fortunately a lot smaller than I had expected. I was worried he would be evil for a while which would have hurt the dynamic like the first film. Part of what makes Batman ’66 fun is the banter between both Batman and Robin. The show simply wouldn’t have been as fun without one of the two heroes being present.

Catwoman also gets a role in this film. Her dialogue with Batman is always so corny that it’s funny. As a result, I can’t say I mind their romance as much as I would otherwise although I still find it out of character for Batman. If she really does turn good, then I suppose it’s good that Batman never lost hope in her rehabilitation. Of course, would he still have her serve out her jail time or go for a nullification on the grounds of being a hero? She gets to fight in the climax and while Batman seemed to doubt her fighting abilities, I think we’ve seen her as a villain long enough to know that she is definitely a fighter. If the villains have to deal with 3 opponents from now on, Gotham just got a whole lot safer.

Alfred looks really good in this movie so his fans are certainly going to be thrilled. He stands up to the villains and never backs down. He stays stern to the end and does his best to make sure that neither Batman or Robin do something they’ll regret. Aunt Harriett isn’t quite as good though as she doesn’t contribute anything to the film except to annoy everyone. Her role in the first film was a little better when she was caught by Evil Bruce Wayne. Admittedly it was definitely a scene that really worked for the evil plot.

I wouldn’t mind seeing more of the human angle for the next Adam West installment if one were to come out. As it is, this Gotham is a lot happier and less crime infested than the one we’re all used too so it would be cool to see how the heroes interact with everyone on a daily basis. We see Bruce Wayne briefly and there are human scenes around, but it would be interesting to see this Utopia. Gotham seems like a pretty perfect place if we’re being honest so it’s even hard to see how Metropolis could be better. Lets face it, a Batman vs Superman movie in this continuity would be amazing!

The animation is quite solid as you would expect. The character designs are on point and the backgrounds look like something out of a mainstream DC film. After all, the animation is still at that high level for a modern action film, it’s just intentionally drawn to look campy and retro. As a result, it’s a film that still has its usual fun, but looks good while doing it. DC’s always been great with animation and that certainly hasn’t stopped in this film. The soundtrack is also pretty good although less memorable. The themes work well with what is happening on screen and that’s always the important part. It’s not super soft music or something that would distract you from the action.

The film isn’t very long so the pacing is very fast. There’s always something happening and the movie just doesn’t slow down. There are also no negatives to be found here which is quite impressive. I just can’t think of anything I disliked about the movie. I’m sure there are minor nitpicks and the film isn’t a 9 after all, but that’s a case of not enough great elements as opposed to bad ones. The film accomplishes at everything it sets out to do. What you expect from an Adam West Batman movie is a lot of good humor and solid action scenes. We get both in this movie. Who doesn’t like seeing Batman as the ultimate hero who is so over the top that even crossing the street too fast is a violation of rights for him? It’s just great and I can’t stress enough how the voice really sells the performance. That’s why getting another film without Adam West would certainly be risky. I’m sure the writers could handle it snce the writing is also very good, but it may be worth it to call the series something else if that happens. Go for the same tone but put it in a new universe.

Overall, Batman vs. Two Face is a great film. The vs title could be misleading if you were expecting a big fist fight, but I think it’s reasonable to assume that you would be expecting more of a mind battle considering it’s Batman. Two Face can fight when necessary though and does get his action in. The writing is on point and the animation looks good. Batman really gets his full credit and while it wasn’t Robin’s best day, he got a lot of good hits in as well. You really can’t afford to miss this one if you consider yourself to be a big DC fan or a comic fan in general. It’s pretty happy but also transitions well for the serious moments. There’s a nice mystery as to who Two Face is which you can sink your teeth into as you wait for the climax. It’s the perfect blend of why DC is so great.