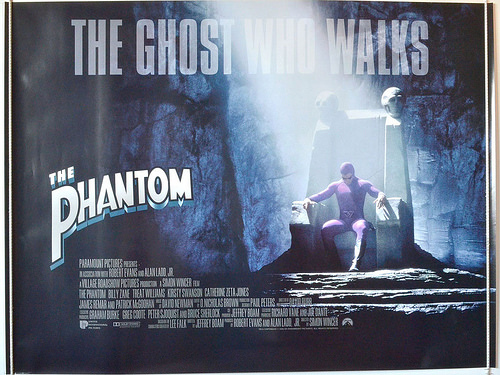 The Ghost Who Walks is definitely not someone to be trifled with. The villains learn that the hard way during the film, but does it hold up well? I’d actually say that it does as it’s a pretty solid superhero film all around. With a memorable villain to help improve the cast, it’s got all the potential that it needs. The actual Phantom could certainly have been better, but his ineptitude also helps make the film pretty fun.

The film starts off with a very quick origin story for the Phantom. He washed ashore a strange island one day and was given a cool ring. Its effects are fairly vague, but Kit then decided that he would become a crime fighter. In the present, a tough corporate businessman named Drax has decided to take over the world. To do this, he’ll have to assemble the 3 mystical skulls which will make him all powerful. Any minion who questions his decisions are promptly eliminated which leaves no room for dissension. He will have the skulls soon so Kit must don the costume once again and stop him. Meanwhile, a reporter named Diana is trying to help out as well, but is she out of her depth?

Lets launch right into the characters. Drax is a really good main villain because he’s charismatic. He has a sense of humor despite being completely evil and at least gives his minions a chance. They just get too bold at times so he has to silence them. The scene where he throws a spear and tkaes one of the villains down was quite impressive. The guy clearly works out and has skill to make the shot so casually in one try. He also saw through one of the traitors pretty easily and suckered the guy. Admittedly that scene was easily the most violent moment in the whole film. It was pretty intense. Even in the end Drax never gives up and honestly I wouldn’t be surprised if he could beat the Phantom in a fight. He takes everything in stride and it wouldn’t be an exaggeration to say that he really holds the film up.

The 2nd in command is a guy named Quill. He destroyed the Phantom in the past so he wonders how the guy could be back. Phantom’s family tradition of donning the costume definitely helps to support the legend since the hero is seemingly always around. It wouldn’t work well in the modern times since people would realize that it’s a different guy with cameras and all, but for this point in history it’s simply a smart business move. Sala is another one of the big villains although she isn’t nearly as sold on the path of evil. We don’t even know why she is evil to start with, but I’ll assume that she just likes robbing people and showing off how rich she is. A stern talking too from Diana quickly gets her to see the light in the situation. She really doesn’t have much of a role beyond this mini character arc though, but at least she can fight.

From the heroic supporting characters we have Diana. She talks tough and never backs down from a case. I got a lot of Lois Lane vibes from her and she doesn’t even appear to be grateful when saved since she could have saved her self, apparently. I wouldn’t be too impressed at being saved by Phantom either, but desperate times and all. Diana does live up to her reputation as she quickly figures out who Kit is. Kit’s origin story helps make it easy though since he had to take up the mantle right when his father died which meant that he had to leave New York rather suddenly and vanish into the forest for years. He was gone for so long that he forgot the currency and ended up paying a cab driver a few thousand dollars for a quick ride. Those scenes always make me feel sad, but I guess it’s good for the cab driver. Sometimes threatening your passengers actually works. At any rate, Diana was a good heroine.

Finally, we have Kit . I can’t say that he’s a great character and I knew this as soon as he started getting wrecked by the random villains at the beginning of the movie. He had the drop on them and still had to settle for a tie. He gets ambushed multiple times during the film. One time where he looks particularly bad is when he breaks into a museum to steal one of the skulls, but does it during broad daylight while in his civilian form surrounded by people. Of course that didn’t work and if the villains didn’t stop him, the cops would have. (After all, the cops sold out to the villains which is the only reason why they aren’t around.) I have to assume that he hasn’t been a hero for too long based on all of the rookie mistakes that he makes throughout. I’d say that he means well but accepting a kiss from Sala was pretty iffy and didn’t do his character any favors. He’s fun to mock, but that’s basically the only reason to like Kit. Even the whole breaking off contact for several years was pretty iffy since he had absolutely no reason to do so. Felt rather random.

The film has its share of plot holes or at least weak writing like Kit’s animals getting across an entire island with greater speed than a plane. It’s certainly not going to win any Oscars, but at least it’s always a fun film. The fight scenes aren’t super stylized or polished but they get the job done. There’s that genuine nature to the film that you won’t see in a modern film as here you can imagine a normal joe just putting on a costume and running outside the house. It’s a film that can’t be made anymore and is a lost product of the old times.

The film also moves really quickly so there is rarely a dull moment. Something is always happening and finding the skulls never felt tedious as a result. The scene where Drax finally obtains two of them were certainly fun as he starts running around and blasting everything. You almost feel bad for him since a 4th skull being added into the picture was basically cheating. He worked so hard to collect the others only to be told this plot twist. Better luck next time and all, but this was his chance. I’ll give a quick shoutout to Phantom’s two sidekicks, the wolf and the horse. They were very useful during the adventure and he would have been sunk without their support.

Overall, The Phantom is surprisingly a good movie. It certainly kept my attention from start to finish. That’s mainly because the characters were actually good. Surprisingly the villains were better than the heroes, but the film certainly wouldn’t have been as humorous without the Phantom. I’m not sure how he commands so much respect for everyone throughout since the guy isn’t that impressive, but he is rich and that does go a long way. His costume should remind you a bit of guys like Daredevil or other street brawlers so at least his costume had some heart. Throw in a lot of similarities to Indiana Jones and Tomb Raider and this is a film that can be fun for many different movie fans. If you haven’t seen the film yet, then it’s time to finally give it a watch. I also wouldn’t mind a sequel although it’s really too late for that. A reboot/remake could have some potential but only if they skip through the origin. The whole Jungle Experience is honestly a minefield full of things that could go wrong which made it even more impressive when this film still managed to succeed.

2 thoughts on “The Phantom Review”