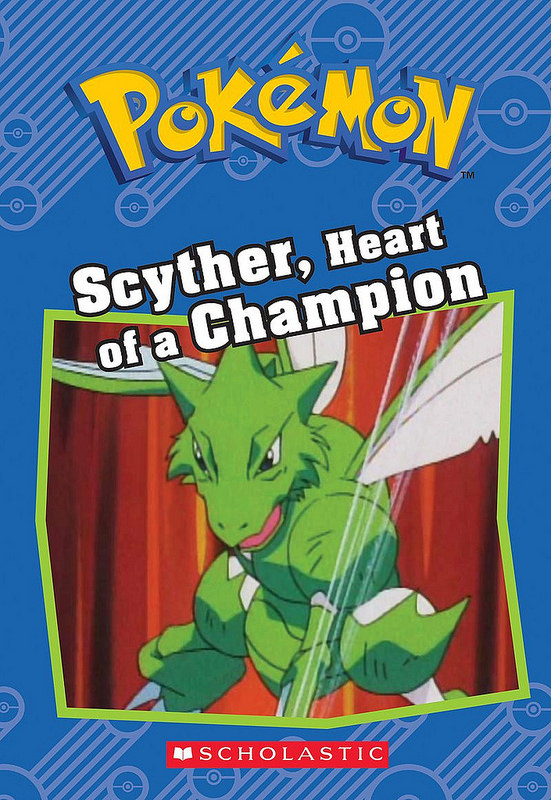 It’s time for a retro Pokémon adventure. This one definitely adapts some intriguing adventures that make you wonder just how strong the Pokémon really are. Despite the power level moments being puzzling this is still one of the better books since there is a lot of action. As usual there are two stories to be found here so I’ll talk about both of them.

The first story has our heroes walking through the forest when they encounter an injured Scyther. It apparently lost a battle for clan leadership since he is old now and has been cast away. The rules for the clan are that you have to leave if you lose. It’s pretty sad for Scyther but when you remember that he has done the same to many others (Since it’s referenced that he has won many times and only lost this one due to age) then the sympathy goes down a little bit. Still, he wants one more chance to fight for leadership so in the meantime Tracey captures him. Scyther isn’t pleased to say the least but then Team Rocket shows up so they will have to grudgingly team up.

Scyther has always had a cool design but I don’t like what they did with him in the show. I don’t think Pokémon should ever become senior citizens, especially since that whole concept seems to vanish later on. Just as importantly, they could have made him old without making him ancient. That would have made him much better if you ask me. As it stands, he is old but still gets a lot of hype and is treated as a very strong Pokémon. He was saved by the guy who overthrew him though and so I can’t buy into him being an actual rival for Charizard. I suppose none of this is Scyther’s fault though and I can’t be mad at him for still being feisty and ready for combat.

It’s not a bad story and in fact it’s a pretty important one since Tracey finally gets a new Pokémon to fight at his side. It’s pretty straightforward though as Team Rocket is the only threat here and you could argue that they have never been a threat before so why start now? The fact that the book implies they were about to win is pretty funny if you ask me. I do like that Ash was the first to think of the idea of capturing Scyther in order to take him to the Pokémon Center. This is the main character that I grew up with. A kid who was always jumping into action as opposed to being confused.

The big story of the volume has Ash and friends enjoying a good time when a trainer shows up to challenge him. The guy thinks Ash looks tough so he will make for a worthy opponent. Ash agrees and goes up against this guy but his Pikachu gets downed in a single hit and Charizard does no better. In fact, Charizard loses so badly that his life is in danger now so Ash might have to rethink using his Pokémon in such dangerous fights from now on…or quickly go for the rematch.

The elephant in the room here is that a Pokémon should certainly not get near fatally wounded from a single attack. Not to mention that it was an ice attack against a fire type. Many solutions will pop into your head like why doesn’t Ash put Charizard in a Pokeball and run to the Pokémon Center or whip out a Hyper Potion. I feel like the Pokeball trick didn’t work in the anime and the book may have mentioned that but this is just as strange. Why wouldn’t it work? If objects like ice can block a Pokeball’s power then that really is a pretty big problem. If Pokémon fights really are this dangerous then it does give N and his followers a leg to stand on when they say that Pokémon fights are barbaric and must be stopped. Their lives are clearly being put at risk in every fight if this episode is to be believed. Either way I always thought their ideology was pretty interesting but let’s stay on topic.

The only lesson Ash learns from this is to go right back and fight the guy again. Sure, they dodge this time but what if the attack had actually landed? Then they would have been in the same position only Charizard would be a lot weaker this time around. Ash should have either turned down the fight or brought out Pikachu again. As an Ash fan part of me is glad he didn’t turn down the fight but the stakes sure increased here. I thought in the anime he only reason the Poliwrath was so strong was because he had on some kind of equipment that boosted his attack but maybe I was misremembering since here he book treats the belt like a normal one that isn’t actually affecting the fight.

Finally I also have to question how Pikachu was so thoroughly humiliated in this fight. Sure, the Thunderbolt didn’t work and that was the first cause for concern. Even ignoring the type advantage, Pikachu should be at a crazy high level by now. Then Pikachu should still be quick enough to dodge the counter blow and durable enough to endure it. Pikachu was incredibly lowballed in this episode for the plot’s and as a loyal fan that was a little disappointing. Controversial Opinion time, I think Pikachu could take down Charizard in a fair fight. Still, ignoring this, it was cool to have a new trainer who could fight at such a high level. It’s too bad he never appeared again since the guy was definitely skilled. Having him show up in the next Pokémon League Championships would have been a really cool way to go about it.

Overall, this is definitely a pretty good Pokemon book. Both stories are fun and hold up well in their own right, but the second story is definitely the best one. Most of the story is about the big fights and we finally have a Poliwrath who is looking good. That Pokémon has a great design so I am certainly glad to see him getting the hype he deserves. This part of the Pokémon anime is still nostalgic from the good ole days and I look forward to the day when the anime gets back on track from this Sun and Moon saga. It’s stayed it’s course and we need more serious fights like the one this volume has. The suspense and drama have vanished in the newer episodes.