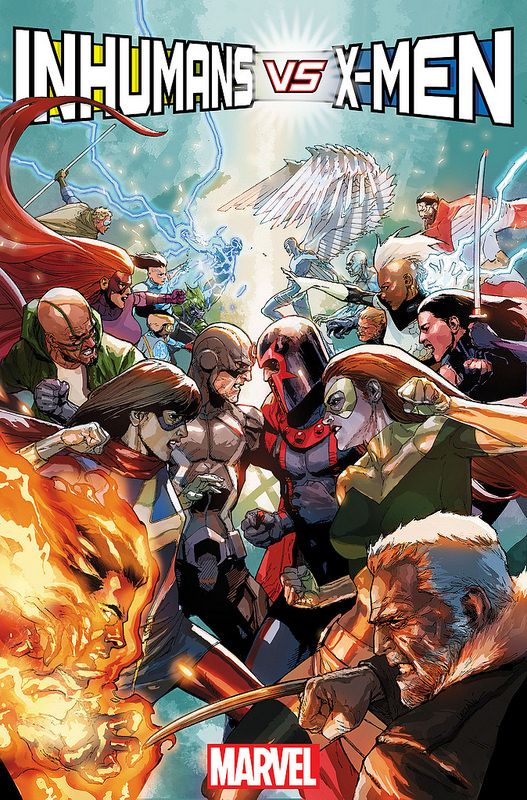 It feels like such a long time since I’ve reviewed a Marvel or DC comic right? Well, what better way to get back into it than by reviewing a big Hero vs Hero event? This time the Inhumans and X-Men are going at it. With both sides having morally dubious leaders at the helm you really have to decide which team to root for. The battle will decide the fate of the mutants as well as the Inhumans. As a result, the Avengers and Fantastic Four don’t really care either way so they have decided to stay out of the fray. I’ve always been a big fan of the X-Men and never cared much for the Inhumans so you can imagine which team I am on in this comic.

A lot happened prior to this volume, but the recap on the front page does its best to bring you up to speed. There are 2 big Terrigen Clouds that have come to Earth. These clouds are turning a large part of the human population into Inhumans. The good news is that this cloud doesn’t destroy the humans who aren’t Inhuman deep down unlike the Agents of SHIELD show. The bad news is that it is murdering every mutant who comes into contact with it. Cyclops led a team to destroy the first cloud, but then Black Bolt murdered him. There is now one more cloud left and Beast was tasked with finding a way to save the mutants without destroying the cloud. He was unsuccessful and now they have 2 weeks before total anhiilation. Storm, Emma Frost, and Magneto have to come up with a plan as the 3 main leaders of the X-Men factions. Ultimately, they decide that they have to destroy the Cloud and to do that they will have to temporarily incapacitate the Inhumans. Will their plan be successful or are the Inhumans prepared for this?

Right away you may wonder why the X-Men don’t just negotiate. Honestly, I’m fine with them just attacking. The Inhumans never negotiate and with how stubborn and arrogant they are, they’d never agree to remove the cloud. They want all of the extra Inhumans they can get because it’ll give them more fighting power in the future. Maybe they could have given it an attempt, but then it may just tip their hand. Furthermore, the Inhumans already know (or should know) about the cloud’s affects for the Mutants. They act a little shocked towards the end when they learn how close the deadline is, but that’s just the book trying to make them look at least a little redeemable. It’s a last second character switch to try and not make them look like the villains, but it certainly didn’t work on me. Attacking is the best option.

Now, which team should win such a fight? Well, I’d definitely side with the X-Men yet again. They just have too many powerful fighters to lose. Magik, X-23, Emma Frost, Magneto, Old Man Logan, etc. The Inhumans have some strong fighters like Black Bolt and Karnak, but that’s really about it. The others would lose to the more middle of the pack X fighters like classic Cyclops. Then we’ve also got the lesser known X members like Psylocke waiting in the back. This should be a complete blowout and even more so since the X-Men have the element of surprise on their side. The first 2-3 issues are basically them putting the Inhumans on the defensive and kidnapping all of their critical members. Unfortunately since the 1st cloud did a lot of damage, there are a ton of new Inhumans who start to turn the tides. Mostly it’s only because the X-Men are nerfed just in time. Old Man Logan looks particularly bad as one of the new recruits takes him down rather quickly. The excuse is really that he let his guard down and you could argue that even though this version of Wolverine is particularly brutal, he still didn’t really want to hurt a kid too badly. X-23 has no such qualms, but she also doesn’t do very well in the fight.

Don’t even get me started on Psylocke vs Medusa. She should destroy the Inhuman in a snap. Honestly, I feel like most of the comic authors don’t give her the credit she deserves. Psylocke is a very talented ninja who knows how to fight at close range and doesn’t need to rely on her psychic abilities. Yet, she seems rather helpless in many of the battles I see her in. She’s not a 1 trick pony and I’m still waiting for a big Marvel comic to realize that. So, I’ve explained why the X-Men should absolutely dominate and I’m happy to say that they did effectively win. They accomplished their task of destroying the cloud and now no more Inhumans will be born while the mutants are safe.

Granted, they certainly had help. A few Inhumans decided to destroy the cloud as well once they found out that it was destroying the mutants. The X-Men were also in prime position to finish off the Inhumans as well, but naturally that wasn’t their plan. It was Emma’s and she did attempt to finish them off, but one person against 2 armies? That wasn’t going to end well no matter how powerful she is. She did escape and will stick around as a villain though so the Inhumans should definitely be worried. She made for a great character here though and I dare say that it’s easily her best portrayal. She’s on a mission for revenge and even though she ends up tricking basically everyone, you can never truly trust a telepath.

One more reason to root for the X-Men is how uneven the stakes are. If the X-Men lost then all mutants would die. If the Inhumans lost…then they simply couldn’t get anymore new recruits for a while, but those humans that have the potential to turn into Inhumans may still make the change once someone finds more Terrigen. Plus, this way they get a choice on if they want to transform or not. Medusa gets over the whole thing within a single page at the end of the volume so you can tell that the Inhumans were never too invested in this. Yet another reason why I never like these guys.

As always, I didn’t like the Inhumans here. Medusa appears to be two timing Black Bolt with Human Torch and I’m not sure if he ever even notices. She then ditches the Torch to go with Black Bolt again in the end as she explains that she’s happy about not being a queen anymore. Definitely a weird plot if you ask me. Black Bolt seemed like the same stuck up king that he always was and he’s basically in rage mode for the whole arc but doesn’t actually do anything. From the original members, Karnak and Medusa definitely do the most. It was also interesting to see Human Torch as an Inhuman supporter and not neutral. he was definitely useful for their cause as well. On the X-Men side, Beast was more of a traitor who wanted to help the Inhumans so luckily the X-Men locked him up. Beast has always been a really annoying character and this volume definitely did not help his case in that regard. He really can never see the bigger picture and does his best to cement himself as a character you simply cannot count on in any situation.

The art was really good although I’d expect nothing less. It’s not quite as smooth as some of the last events like AVX, but it’s still the high quality that Marvel has been consistent with. The fight scenes really look good and every page is busy with a lot of action without being cluttered. The artwork has a mild grainy element to it that doesn’t take much away from the colors. Good artwork certainly helps to push a comic into the next level. While many are tired of the Hero vs Hero action, I’m always up for it. As long as the fights aren’t cop outs or off screen, it at least helps to finally decide which characters are actually the strongest.

Overall, This was a fun comic. There were a lot of battles and since the X-Men and Inhumans have been rivals for such a long time it makes sense that they would go at it. The comic also got the victor right. While there definitely was quite a bit of plot hax to try and keep the Inhumans in the ring, I suppose the writers felt that a full blowout wouldn’t have been as interesting. They have a point there to be sure although I really wouldn’t have minded all that much. I’d definitely recommend reading this graphic novel. It really takes advantage of all the friends and enemies that each team has made and it helps both sides grab a lot of members. Both sides never appear reasonable since they are spearheaded by the most evil member in the team, but that makes the fight more believable as well. This was never going to end peacefully.