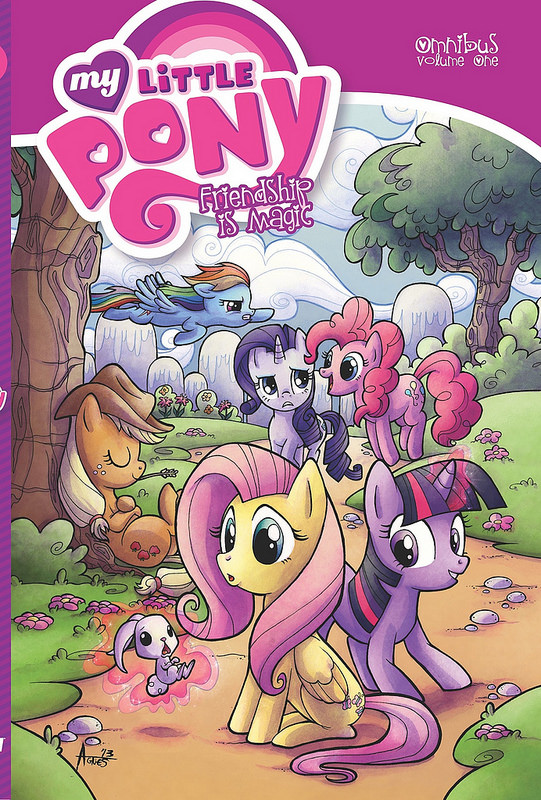 It’s time to check back in with the ponies! I already read the first few issues from this collection during the original volume 1 release, but naturally I had to check out the Omnibus as well right? A certain scene from the first arc still holds the collection back, but it’s still a solid adventure for the most part. In some ways I wish the show would have as many action scenes as this one, but I guess that runs with its own set of risks as this comic makes evident. Well, lets dive in!

So, the first arc is old, but lets recap in case you did not read my original review. Queen Chrysalis and the Changelings are back and they took over Ponyville in an instant. Derpy was the last to fall but now it is up to the Mane 6 to stop this evil threat. They mobilize their forces and head out to also rescue the Cutie Mark Crusaders. Twilight Sparkle will have to use her full powers if she has any hope of winning this round, but it’s still going to be a very tough fight. The villains aren’t hear to pull any punches.

Well, the arc is pretty solid except for one scene where Queen Chrysalis actually destroys one of the animals. It’s a surprisingly violent scene that you wouldn’t expect in My Little Pony. This is the one tricky part about the comics taking a more intense route than the show. While the comics have more fights and serious plots, they can also add in more violence which can get risky. While it’s a quick page that you can easily miss when embracing the hype of the arc, once you notice it there is no going back. It’s a shame since this one moment does limit the rest of the collection. If we ignore that little bit then the rest of the arc is pretty solid. We do get to see Twilight unleash one of her more powerful energy blasts at the Queen even if it’s not enough to take her down for the count.

It is a little iffy how quickly the Pony bonds are broken though. They know that they are up against shapeshifters after all so they should probably suspect that something is up when their friends start insulting them right? I’d expect some of the Ponies to fall for this, but not the entirety of the Mane 6. Ah well, even the ponies have their off days right? The changeling army is definitely impressive and since they seem stronger than the average pony, it’s fortunate that the Mane 6 are strong. An even numbered fight with the rest of the citizens may not go so well otherwise.

Time for the new content! This arc is easily the best part of the volume. The Mane 6 have all been having nightmares and are wondering why this is the case. Well, it turns out that an ancient evil has re awoken. It is the same darkness which once possessed Princess Luna. It has now set its sights on Rarity and kidnaps her. The rest of the Mane 6 will have to hurry if they are to rescue her but the villain’s army is numerous with many shadow creatures at her disposal. The entire kingdom is in peril so Celestia mobilizes her troops. Still, they’re basically just cannon fodder so she needs Luna. Unfortunately, Luna is dealing with confidence issues. Can she pony up in time to stop this threat or is it game over?

This arc is basically what the first arc would have been like without that quick animal moment. The new Nightmare Moon is a fearsome villain and is actually more serious than Queen Chrysalis. She is set on conquering Equestria and comes awful close. Her magic power is considerable and we get some actual fights here. The Mane 6 even have to use their laser blasts to stop her. We often see Twilight Sparkle use her powers, but not the rest of the ponies so that was cool. Naturally Rarity gets the shaft for most of the arc since she was kidnapped, but still looks good during the adventure. Luna’s still one of the best ponies in the series and this adventure is another reminder on that. She’s strong and has a lot of character development. Luna has learned a lot throughout her adventures and keeps that development. Now that she’s gotten over her confidence issues, she is certainly one of the best all around fighters in Ponyville.

Next up was Big Mac’s two part adventure. I always like how Applejacks’ family have good related names that reminds me of the past. I always used to eat Applejacks back in the day and while I didn’t go for Big Macs until recently, I did like the name. Basically he needs to find a nail so he heads for the shop, but the whole village has been taken over by a festival. It’s going to be difficult to find the owner, but this pony doesn’t give up so easily. What ensues are a bunch of random shenanigans where it seems like every pony is conspiring against him. Can Big Mac prevail?

Big Mac doesn’t handle the situation very well and shows why he is the weakest member of the Apple family. He doesn’t take anything in stride so you have to assume that he never leaves the farm since he should be used to this. Ponyville is always quirky as its inhabitants just love to have a bunch of fun. It’s a bit of a stretch that he couldn’t find the nail for the whole 2 issues, but he was kept pretty busy. The most enjoyable side trip would certainly be when he teams up with Princess Luna to wreck everybody at track and field. That was handled pretty well. The rest of the story was fun enough as well.

The final two issues were about Cadance and Shining Armor. I have yet to see them in the TV show so it was interesting to have a little preview. Basically the issues recount the first time Cadance and Shining Armor got to meet. Armor really wanted to impress her so he worked on his skills and decided to take her to the dance. The only problem is that she already accepted an offer from a richer, more sports savvy pony. Shining Armor will have to use every dirty trick in the book in order to stop his rival.

Unfortunately this was probably the weakest two part comic. It certainly didn’t do anything to improve my opinion of Shiny. His banter with Twilight would probably be the only part of his character that works well and Twilight as a kid is still a quality character. That being said, it’s just hard to be sympathetic to the Knight. He doesn’t embrace the role playing game that his gang plays because he gets too distracted by Cadence. Furthermore, he can’t even speak when Cadance appears and can only say things like “der” and ends up running off. He’s exaggeratedly bad in this comic. Of course, you can’t root for the bully since he’s rather mean, but you have to at least admire the guy’s confidence. He talks tough to Celestia and isn’t afraid of anyone. He probably would make a firm ruler, just a petty one.

As for Cadance, she seems nice enough. Naturally her whole romance with Shining Armor seems rather out of place and isn’t handled too well but if we ignore that chunk of her character than I’d say that she did well. She’s not as fun as Luna or as unlikable as Celestia so I guess she is somewhere in the middle. A reasonable supporting character to have around. So, this volume may have ended on a rather weak note, but it’s not as if this story is bad. It’s just a rather generic prom night adventure featuring two characters that I’m not really invested in. Better them than the Mane 6 though since any romance for one of those characters would result in a permanent addition to the main cast and we don’t want that.

The art for the comics is pretty good. It does take a little getting used to with how expressive it is, but the colors are very sharp and the designs are on point. It does help the issues to feel like the TV show and the animations may be even better to be honest. The comics really breeze by as a result. The writing is also on point as you’d expect. It’s easy to just pick this comic up and start reading. Likewise, the Ponies are about the same as always as well. Rainbow Dash and Applejack are always ready for a fight while Twilight is the one who is prepared for it. Rarity and Fluttershy mainly stick to the back row with Pinkie Pie as they verbally support and insult the other from afar. It would be nice if they could fight a little more, but I suppose it’s good to have a contrast. Rarity did good while she was possessed in her evil form though.

Overall, This was a solid batch of stories. As it’s an omnibus there is certainly quite a lot of content here to make it worth your dollar. The only negative from the whole adventure is when the animal was blown up. Some stories were a little weaker than the others like the last one and even the Big Mac adventure, but it makes sense since the Mane 6 were not the leads. The Cutie Mark Crusaders can hold their own stories as well, but now we know which characters cannot do so. While I can recommend most MLP comics whole heartedly I must cautiously recommend this one. It’s a very solid collection but not for the faint of heart. Still, even with its intensity there is always a lot of quick comedic moments to keep things from getting too serious so for the most part it is okay for kids as well. I’m looking forward to the next Omnibus as that should definitely give us some quality adventures. Until then, I suppose it could be a while before I have another MLP review out I guess.