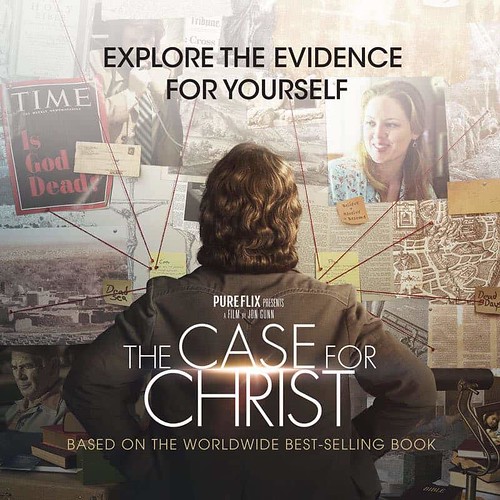 The Case For Christ is definitely a film where the premise strikes out at you immediately. In 2 of the previous Christian films that I’ve seen (God’s Not Dead 1 and 2) it was about the main character having to prove that God was real. This title flips that around by having the lead try to prove the opposite, that God is fiction. He seeks to do this by overturning the biggest event in Christian history, the death and resurrection of Jesus Christ. Is this feasible or will Lee soon find out that debunking such an event is as futile as trying to suggest that the world is actually flat?

The film starts off with Lee and Leslie heading to a diner to enjoy a nice meal. Unfortunately the situation grows dire when their daughter begins to choke. As despair begins to set in and all hope is lost, a nurse steps in and is able to save their daughter in the nick of time. She is a Christian and Leslie begins to believe that maybe there is a God who is watching over everyone. She goes with the nurse to Church and gets saved. Lee is not happy with this as he is a devout Atheist and tells Leslie that there is no way they can stay together unless she renounces her faith. Leslie refuses and so Lee decides that he will put his reporting profession to use by finding evidence and making a complete case that God doesn’t exist.

Naturally such a journey is doomed for failure. It’s interesting to see the evidence behind the existence of Jesus Christ and how we have hundreds of accounts from individuals who saw him. The mountains of evidence left behind is quite impressive. To Lee’s credit, it does make sense to attack the resurrection if you were trying to debunk the religion since that miracle is really what proved beyond a shadow of a doubt God’s power. There are many other moments in the Bible of miracles as well and even if there wasn’t a mountain of evidence to defend the Resurrection that wouldn’t be enough to rock our faith.

At the end of the day it is impossible to 100% prove or disprove many things. You often have to take a leap of faith and it wouldn’t be worth much if you didn’t need it to proceed. I’m not saying that I would refuse additional proof if it was ever discovered, but I’m fine without it. Everything within the Bible is ultimately all that we need to know. The film fortunately has a happy ending for Lee’s character as he concedes defeat. He was not able to prove that God didn’t exist and furthermore, he only just ended up convincing himself of the opposite. It was a good way to close his character arc.

That being said, I wasn’t a fan of the character. He definitely did not take the situation in stride and came across as completely unreasonable. He’s been married to Leslie for several years at this point, enough to have a daughter who is old enough to talk and everything. Yet, he almost immediately wants to end the marriage because she has become a Christian. I can understand not wanting to accept this and to continue debating it, but not wanting to leave immediately. It’s not like the person suddenly became a Satanist or anything like that. He also doesn’t have any sympathy for criminals and even puts an innocent man in jail because he couldn’t be bothered to look at the facts of the case more closely. That same guy then gets stabbed and nearly fatally injured. Lee is sad about that, but the guy just created so many problems during the film.

Leslie was a good character. She wasn’t too forceful about turning Lee into a Christian right away which was good. It makes sense that she would understand the situation and try to be tactful about the whole thing. Naturally she wouldn’t give up on converting him and that’s good because as a Christian you understand the stakes better than anyone. If she can’t convert Lee in time, he’ll end up burning in Hell for eternity. Of course you don’t want someone you’re close with to experience such a fate. Since the stakes are that high, she has to try playing 4D Chess and trying to slowly get him to her side. At times maybe she wasn’t perfect with her approach, but at least she kept on trying.

I also liked the characters that Lee went to for advice. They all had an extremely confident air about them. Their smirks basically never left and while they weren’t downright condescending to Lee, they certainly seemed to think that he was asking extremely basic questions. Of course they likely weren’t in the best mood since he clearly was asking them questions to get them to take a shot at their religion so they were guarded. I just always like these kind of characters. You know that they’re not going to be on the defensive during the verbal exchange and have all of the answers.

Overall, The Case For Christ is a pretty fun film. The writing is solid and the pacing for The Case for Christ is on point as well. I haven’t seen any debates in a while, but I always like seeing debaters challenge the two sides. I’m certainly not impartial as I’m a Christian, but all the more reasons to better understand the points that the opposition makes so I can know how best to respond. If you liked God’s Not Dead then I believe you’ll like this film. The main character is definitely annoying, but the rest of the case is solid. His coworkers are all pretty fun characters and the Nurse who saved the kid at the beginning isn’t bad. Maybe a little ineffective the whole time, but saving the kid is really all she needs on her resume. I’ll definitely be interested to see which film this company churns out next.