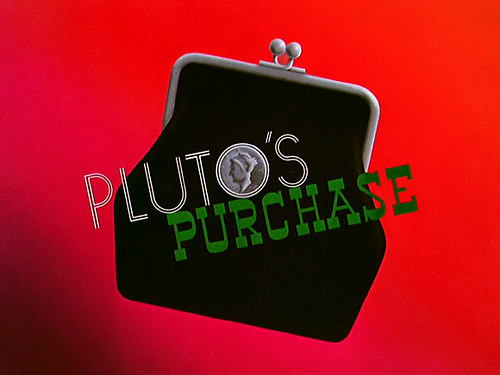 It’s time for the next Disney short which is another Pluto special. Unfortunately it wasn’t very good like the last one. It’s a shame because this special was going reasonably well until the very mean spirited ending. Definitely not the way you want to end any special.

The story begins with Mickey sending Pluto to the deli in order to grab his lunch. Mickey has been growing old over the years so of course he wouldn’t go grab it himself. Pluto has no problems with the plan since securing his own lunch will make it taste even better. Unfortunately, one of the alley dogs decides to try and steal the meat. Pluto is in for quite a fight!

It’s a classic story of two dogs fighting it out for the same lunch. Obviously Pluto is in the right here as it’s his lunch which he paid for fair and square. The other dog is just another in a long line of villains who would like to stop Pluto but he shall fall like the rest. At least that’s what you would think. Unfortunately the special actually ends with the dog winning and in one of the worst ways possible.

Pluto had made it home but then Mickey snatches the lunch away and gives it to the other dog. That was one of the biggest betrayals that I’ve seen in quite a while and Pluto doesn’t get a happy ending of any kind. Being forced to share it would be one thing, but losing it altogether? Yeah that’s not really a good idea.

The whole thing also makes Mickey look very bad and out of character. He seems completely oblivious to everything when I like to think that he is more on the cunning side and always ready for what is to come. He would have realized that having Pluto go grab his usual lunch would lead to the assumption that it was his. He should have told Pluto straight up what was going on instead of all this zigzag. At least tell him to buy 2 since then the implication would also be clear. Not saying it until the end just isn’t a nice or fair approach.

The animation is smooth as always. Disney is still consistent in that area and that won’t change for quite a while. It’s easy to forget just how old the specials are since they look so bright and vibrant. You would be forgiven for thinking that the special is a lot newer than it actually is.

Overall, this special is one that you will probably want to skip. Dread it, Run from it, but the Pluto specials will always find a way to break the mold of Disney successes and make some kind of mistake. At least if these two specials are a good indication of the group. There’s just no reason to watch a Pluto special when you can watch one about any other character. He’s simply not ready for the big time.