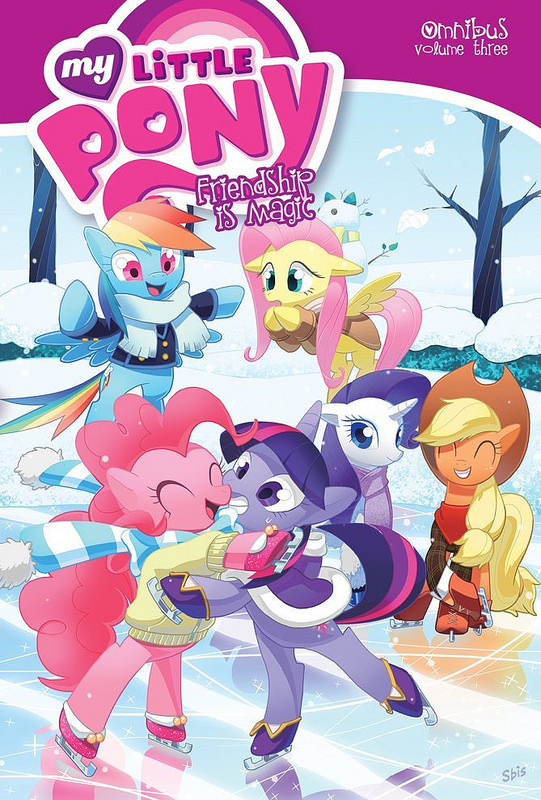 It’s finally time to check out the next MLP comic collection! While the first collection wasn’t the greatest it did have a lot of epic stories. The second bunch played it a lot safer but most of the comics were more slice of life themed as opposed to dealing with serious villains. This one decides to mix and match from both as it goes back to bringing in big villains but also keeps the violence down to a more tolerable level. Thus, I dare say that this is probably the best MLP volume so far although it has the most power level related issues involving certain Ponies.

The first adventure is a multi part story where Applejack brings along her friends to see the farm her cousin (I think he’s the cousin) owns. Unfortunately it has been attacked by a bunch of Buffalo and Bison as of late. They are terrorizing the poor Apples to the point where the family has given up and are packing there things. Applejack will not stand for such a scene and declares that she will run the Buffalo out of town herself. The problem is that she is outnumbered and the rest of the Mane 6 aren’t really on board with the plan. Looks like Applejack is on her own.

It’s definitely a pretty fun story but the rest of the Mane 6 can be annoying. That’s one of the tricky things about having a show with friendship as its core when the Mane 6 don’t actually get along all that well at times. Twilight is determined not to use her abilities on citizens of Equestria but she takes it way too far since these guys are actually destroying property and beating people up. She’s willing to see her friends get shoved around and mocked while she just watches. This is definitely Twilight’s worst appearance and Applejack is definitely the voice of reason here. There’s no way I can feel bad for the Bison or see their side of the story after this so I was definitely rooting against them. A bit of a frustrating story, but a good one nonetheless.

The next story is also a 2 part adventure. It starts off with a bang as Vines have started to invade Ponyville. Zecora and her woodland creatures were already defeated and now all Ponies are threatened. The Mane 6 head inside the forest to investigate and it turns out that the Deer are behind this. That’s because a Minotaur has started to build a mall on the forest so they are tearing down the trees. The Deers respect the Minotaur’s power so instead of stopping him they will just invade Pony land. The problem is that Celestia may have given the Okay on this project so Twilight Sparkle will have to find some way to stop them herself. The problem is that the vines are stronger than her magic and the Minotaur isn’t afraid of her magical powers. What’s a princess to do?

This one makes Twilight look pretty bad as well though since she is unable to do much of anything against these guys. For starters she is the princess so she should absolutely be able to stop the Minotaurs with her magic. Furthermore, sh has the authority to cancel the project and arrest the builders if they refuse instead of just working around them the whole time. I’d also take down the Deer for his insubordination as well though since the guy was pretty annoying the whole time. The heroes are just very content to let the villains have their way which can be dicey.

Following that up is a one shot story about a pair of wrestlers. One of them is pretty timid and whenever she tries to be friends with her partner she is shot down. The ponies just can’t stop themselves from insulting each other all the time. Rarity thinks this is awful and is determined to get them to make up with each other. When one friend goes down with a broken leg it is up to the other to take her spot in the ring. Can she really do it though? She’ll have to act tough to keep up the facade but doing that while dealing with a world champ is a tall order.

This story naturally isn’t quite as epic as the last two but it’s still a well written story that is pretty fun. You’ll probably see the plot twists coming a mile away though. Rarity looks particularly good here and since she didn’t get a role in any of the other stories before this one in the collection at least this was her chance to get some proper screen time. It’s the weakest comic in the collection by default but a solid one and a good breather before the next issue which gets personal.

Next up we are back to the two parters as Ponyville has its first Civil War. Twilight Sparkle heads off to another country for a meeting but not before declaring that Ponyville will be recognizing its first ever landmark soon. Once she leaves Applejack assumes that it will be her farm since it was the first spot of the town but Rich pulls out a loophole and says that his company was on the first ever building. Various ponies choose sides and it hits close to home for Applejack as some of her best friends leave her including Rarity. She decides that maybe it’s time to leave Ponyville. Can Twilight end this unease upon her return or is it already too late for these friendships to mend?

You’ll be happy to know that Twilight Sparkle is pretty reasonable in this story. I have to say that Applejack was right by the way since the contest was initially about the first ever landmark in Ponyville which is obviously the farm. Without it we wouldn’t have a town in the first place. Rich trying to argue that makes sense but Rarity getting bribed into joining his side makes her look really, really bad. Betraying her friend for money? I guess I shouldn’t be too surprised but then the rest of the gang starts to take sides which is no good. The other members of the Mane 6 who don’t want to be in the War just run away which isn’t much better. It shows just how weak the bonds of friendship are in Ponyville so no wonder the villains always have such an easy time breaking into the place. The heroes don’t exactly make it difficult for them.

The two parters just don’t end as we get another big adventure after this one. It starts off with a flashback showing how edgy Celestia used to be as she blasts Luna away while her sister is pleading for her to stop. Their battle broke off an apple which landed in Ponyville years later. These apples have started to take over all of Equestria and even Celestia may not be strong enough to stop them. The Mane 6 will have to prepare their strongest attacks, but only the return of Fluttershy may be enough to prevail. The problem is that Fluttershy has enough power to wipe out the village as well so is bringing her in really the right move?

This one was a fun homage to Attack of the Killer Tomatoes. It’s not 100% serious of course as you just can’t take Apples seriously but it was a fun comic. I have a hard time believing that Twilight Sparkle and the gang couldn’t just blast them out of the sky though. I mean lets be serious about this…they are apples? Applejack makes a living out of breaking them down into many different meals. It’s what she does and it’s why the world always cheers for her. Well, no matter it was a fun comic and I always love seeing an invasion story. Fluttershy also really came through for the team when it counted.

Finally we end with what may be the best saga among all of the MLP comics and it’s a story that I’d love to see happen in the show as well. A mysterious pony has been traveling around Equestria recruiting all of the original Mane 6 villains to form one last attack on the heroes. Among them she brings in the Flim Flam Brothers, The Minotaur, Queen Chrysalis, and King Sombra. Together they will take over the town and restore order to the world. The Mane 6 and Celestia are completely unprepared for this attack but they won’t go down without a fight. This saga is 4 issues long so it’s not rushed at all and there is plenty of time to really enjoy the fights. It’s just very well done.

This saga was epic for obvious reasons. We got to see a lot of big fights including a beam war between Twilight and Chrysalis. That was a lot of fun and I do like how the series makes it clear that Twilight is the stronger pony in a 1 on 1 fight now. With her Alicorn powers that makes sense. Luna and Celestia don’t last very long but it’s not like you would expect much more out of them anyway nowadays. The comic also had some fairly dark visuals with Sombra’s home world. You really get the feeling that the place is very desolate and without hope. Their monster designs are quite intense as well. This is the kind of story that just works really well in concept and in practice. It’ll be hard for any other story to beat this one.

The art switches styles quite often after each story. They all look fine for the most part although I wouldn’t call too many of them great. They all look quite different from the TV show so they will take a little getting used to of course but I wouldn’t call any of them bad either. They’re just different and the character models seem sound. The fights are solid and the images are clear so at the end of the day that’s what you want to see in these issues. You are encouraged to read with how well everything looks.

Overall, This was definitely the best MLP collection yet. All of the stories were quite good and they had a lot of action. I still do think that for better or worse the comic does exaggerate the Mane 6 quite a bit and makes them meaner to each other though. It felt like they were betraying each other in just about every comic which is certainly a bit much. I like to think that their bonds are way stronger than that and they wouldn’t be deterred so easily. At least becoming friends afterwards each time should just ensure that their bonds get even stronger. The Mane 6 aren’t the kind of ponies to stay down for very long. Whether you are a fan of the series or not you definitely don’t want to miss this collection. Fans of any action/adventure story will get a kick out of it.