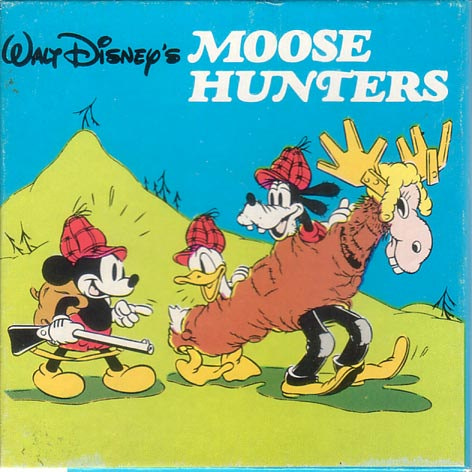 It’s time to look at a classic Disney special. Moose Hunters is a team up adventure and those are usually pretty solid but Goofy ends up getting most of the screen time which was definitely not a great move. It ends up being one of the weaker specials I’m afraid but as always Donald is here to try and save it.

The adventure begins with the trio deciding to get some Moose. Goofy and Donald will act as the bait while Mickey loads the shotgun. Unfortunately for the mouse he gets pushed by the big moose on campus and ends up losing his shotgun. At this point it is all over for him. Mickey delays the inevitable by grabbing some grass big that’s basically it for him in the special. His subplot wasn’t bad though.

Goofy and Donald’s plot is the one that drags on. They decide to dress up as a female moose and do their best to distract the other one but since Mickey is out of the picture they are stuck in the role for a considerable amount of time. The same joke just keeps on going and going long after it has ceased to be amusing. While it is a parody of this kind of plot, I also never like the idea of using romance to trick the opponent into lowering his guard. For starters if should never work unless a character is extremely weak willed. It would have been nice if the Moose had just kicked these guys away. It would have sent a good message that he was not to be trifled with.

As always the animation is pretty solid. It’s all very fast paced and uses a lot of movement without getting sloppy. The character designs are on point and you do feel a certain level of tension throughout as you wonder if the heroes have what it takes to win this fight. There isn’t really anything in the way of music here but seeing as how the special is only a few minutes long there wasn’t much time to throw it in.

Overall, Moose Hunting is definitely not going to be remembered in the same way as most of the other shorts. It’s just not nearly as captivating or intense, but I will give it some points for effort. If you just really want to see the old gang in a new adventure then by all means check it out but I would sooner advise just about any of the other specials for a better time. This one’s plot just wasn’t good from the start which hurt it. After all, how can we root for the main characters when they’re hunters? It’s a very morally dubious career choice and one that can be a debate all on its own. Long story short though, I was rooting for the moose here so when the main characters got wrecked I was pretty satisfied. They had to beat a hasty retreat so the right side won.