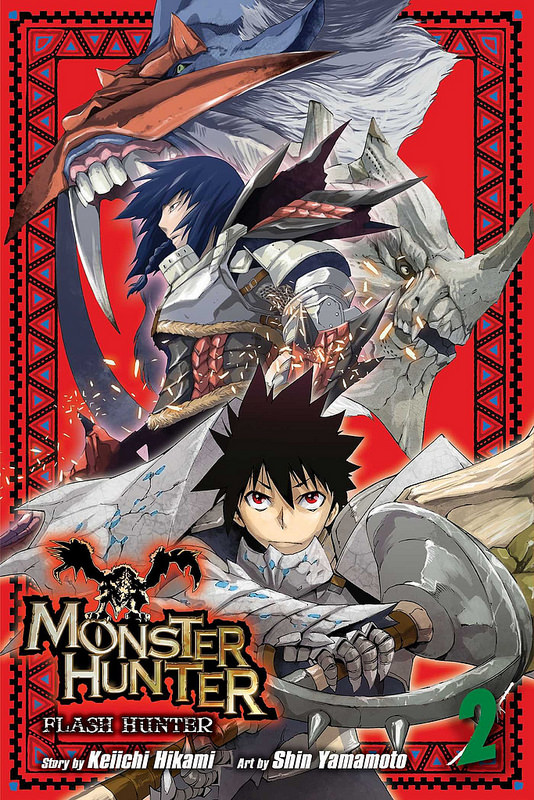 It’s time to look at a Monster Hunter manga. This one made it all the way to 10 volumes and has some cool cover arts so how does it rank? Well, it’s a pretty good premise and I wouldn’t fault its pacing, but the manga does fall short in some areas. Mainly the art and the characters are what brings it down. Salvaging the manga though is the amount of fights we have on deck and the fact that it’s still interesting. It pales in comparison to many other titles but I wouldn’t call it bad either. It just takes a while to get going and by then it’s basically over.

The series starts with Raiga as a kid. He looked up to his local Monster Hunter (A guy who hunts monsters) but unfortunately this guy got scarred after a tough quest and changed into a violent person. He is now bent on getting revenge and ditched Raiga’s village. The hero and some townspeople survived, but Raiga swore that he would find this hunter one day and get payback. He decides to be a hunter and a few years later he has finally attained his goal. The problem is that his bark is bigger than his actual skill. He teams up with Keres, an arrogant archer who panics quite often and Torche, a navigator who isn’t particularly skilled. Can these three heroes become legendary Flash Hunters?

Lets address the elephant in the room. That is to say, the terrible character known as Raiga. It’s obvious what the series is going for from the start. Raiga’s the hot headed main character who jumps into action and thinks about the consequences later. That’s fine, I’d actually consider that to be a positive trait most of the time. A lot of my favorite characters are like that as with Vegeta and Ichigo. The problem is that Raiga never improves enough where he can afford to act this way. All he ends up doing is putting everyone in harm’s way. Time after time he rushes at an enemy and nearly gets the group destroyed. It always works out one way or the other, but always because someone saves him and not because he ends up beating the monster. Raiga doesn’t care about teamwork and will always choose to pursue the monster.

You’d expect some kind of character arc for him somewhere down the line but it never, ever comes up. Even in literally the last volume he makes the same mistake. A monster has been forced back into the ocean and the town is calling in a bunch of hunters. Once there are enough of them then the team will go in to finish the monster. The problem is that Raiga wants to prove that he has surpassed Bexel (The rogue hunter who betrayed his village) and goes in alone. Naturally he gets beat up as always and Bexel is forced to save him. Then the rest of the team arrives and Raiga is saved, but our young hero ends up taking most of the credit. What he did was completely unnecessary. He does something like this in every volume and you can see why Keres kept ditching him. Raiga is a man who puts his own adrenaline needs above the lives of his teammates. Such a character won’t go far.

Raiga was just annoying the entire time and I’m still shocked by how he never got better. Unfortunately his teammate Torche is almost as bad. Her personality quirk is that she’s pretty clutsy and isn’t good at anything besides being a scout. She can pick out monster weak points, but this almost never comes in handy. She defends Raiga a lot which isn’t good either. The worst part is that she never really becomes a fighter. I get that not all team members need to know how to fight, but at least getting better armor and superior weapons would help her case a lot. She just ends up being more of a non character than anything.

Finally we have Keres. He’s a mixed bag because on one hand his constant need to run away is annoying. He gets nervous a lot to the point where he even retires for a while and is forced back into the hunt. On the other hand, he is often right when Raiga is involved. Why go to hunt a monster that isn’t bothering anyone when they can wait for reinforcements? He isn’t constantly addicted to fighting the way Raiga is. Still, he can be annoying in general so since all 3 main characters are annoying you can see why the characters is an angle which holds the manga back.

I also think the art may have something to do with this. The artist isn’t great at drawing facial expressions so everyone tends to have the same grins, frowns, etc. They all look the same after a while. Different character designs, but the same postures and expressions. Then the artist gets completely lost with regard to the fight scenes. You really can’t tell what is happening half of the time because it is too chaotic. Everyone is using a huge attack and the same goes for the monster so all of the action lines intersect to the point where it’s too muddled to make anything out. The art never gets better unfortunately and this would certainly be one of the weakest art that I have seen for a series.

Then we’ve got the main rival character Bexel. You could also call him an antagonist I suppose, but Raiga definitely exaggerates when talking about him. If you think about it, Bexel never actually hurt everyone. He decided to distance himself from everyone, that’s certainly true. At the same time I think it’s a little iffy for Raiga to basically act like he’s a monster. Bexel single handily saves many villages because of how crazy strong he has gotten. He may not be a hero, but he certainly is the best hunter in the series so just let him do his thing. Even by the end of the series nobody is even close to being as strong as he is. That’s pretty impressive.

There are also a few supporting characters, but given the series we are talking about none of them are all that memorable. You have another pair of hunters who do their best to support the main 3, but they aren’t all that powerful. One of them has his big hero moment which is basically Raiga’s fault so when he doesn’t return from his fatal battle we have the lead to thank. Then there is another heroine who shows up from time to time. She’s way better than Torche, but never feels too important. Honestly, nobody feels that important aside from the main 3 and you could basically just call them a distraction if anything.

I will give the manga a lot of credit for how it handles the monsters. This could have easily gone the animal violence route, but the manga is very classy with how it treats the battles. The monsters don’t get all that injured or when they die it isn’t super graphic. So while I do think the title failed in a lot of ways, this was a very important element and it handled this part very well. After all, better a 6/10 then getting the rest right and still dropping to a 4/10 with all of the creatures getting wrecked right?

I still think Bexel didn’t really get a fair shake, but I’ve already spoken a lot about the characters to lets start to wrap this up. Why is this manga still good when everything before this in the review was pretty negative? Well, as I mentioned before the premise of the manga is still good. I like a good adventure title as much as the next guy and the Monster Hunter world has always been pretty interesting. I liked the armors that the characters wore and while the fight scenes could be hard to read at least they were present. They were also rather long the whole time so you can’t say that the manga forgot that part. It does a good job of making the danger feel pretty real to the heroes. 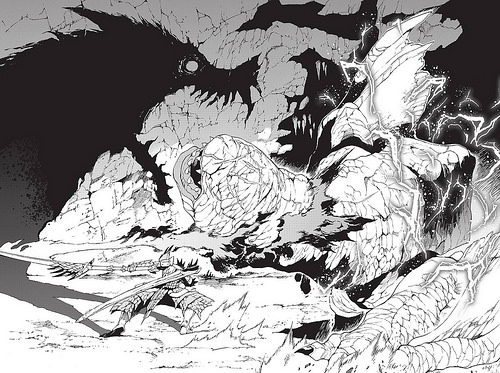 Overall, Monster Hunter: Flash Hunter could and should have been a lot better than it was. The characters should have been more interesting and likable. I can also dig the concept of the main 3 constantly bickering and all that, but even that isn’t handled well. We also get some random time skips, but the status quo didn’t change much so they ultimately feel pointless. You go from having the whole cast feeling outmatched against one monster to suddenly nothing can stop them in the ending. I’m fine with the main characters being the best since that’s inevitable, but you’re telling me that the whole region is basically out of hunters so without the main 3 they are doomed? How did they all live for so long then? Read this manga if you want a good action/fantasy title but prepare to get a little irritated.