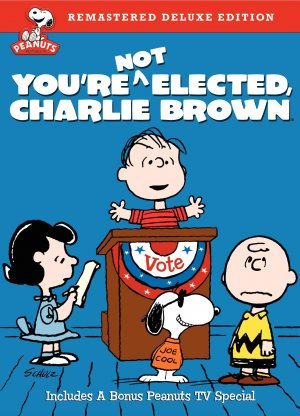 It’s time to look at another Peanuts special. It’s been quite a while since I saw the last one but as Election Day just passed it’s the perfect time for it to air. These specials are always quite short, but make for fun adventures with the cast. Charlie himself gets a really small role this time around so Linus is the one who has to take the center stage this time around. Does he have what it takes to hold the special?

The class is getting ready to pick their Student President which is naturally how it ties into Election Day. Charlie Brown and the others figure that Linus would make a good candidate and he agrees. However, there is one student who is running against him. The guy doesn’t seem to be much of a threat as so far everyone is voting for Linus, but Lucy still keeps on running surveys. She decides that they can’t get complacent and is proven correct when Linus goes on a rant about how the Great Pumpkin is real. Kids start to doubt in his abilities. What should have been a clear win is now turning into a very close battle.

That’s the main plot and there isn’t really room for a subplot this time. We still do have some nice Snoopy scenes where he builds himself a big breakfast though. It’s like I always say, when in doubt make yourself a sandwich. Snoopy’s also nice enough to make sandwiches for Charlie and Sally as well though which was nice. Snoopy does have a hard time of it in the actual school though as his Joe Cool disguise doesn’t work too well and then he is kicked out of the school. You’d think that the school would show him a little more respect considering that Snoopy is always the one helping them out of a pinch. Without Snoopy the school wouldn’t be doing too well.

Linus is a good lead and he’s always been one of the better Charlie Brown characters. He does seem to lose some common sense in this special though like when he brought up the Great Pumpkin. Not only was it basically off topic so her had no reason to bring it up, but he should have known that this wasn’t the right time. I can see him going on a long speech about why he would make for a great president though so that makes sense. I was also glad that the real principal got a lot of props here. The kids think they have the advantage at first when they see him sweating, but it turns out that the guy was probably just laughing. He set the record straight very quickly.

As always the animation is pretty consistent with the rest of the Peanut specials. They all look the same so the animators are definitely pretty experienced. The characters are never off model so it helps you get into the adventure right away as if it’s just another episode. There isn’t too much music in this special though. The Joe Cool song that we did get wasn’t all that good so the soundtrack is a little weaker than the average special. No matter, it’s still not a bad soundtrack I suppose.

Overall, This is a pretty fun special. It’s also very short so it’s not like it would take a long time to watch. At most you may just wish Charlie Brown had run for President since I think that probably would have been a little more entertaining. Of course, he would have been doomed from the start though so this way at least you can believe that Linus not only has a chance, but a pretty good chance at winning this. What could have worked would have been to have Charlie run against Linus instead of Russell, but that could have also ended up being super emotional or tragic so as always it would be a tough balance to keep in mind. I’m now one step closer to finishing all of the specials. It’s definitely a franchise that has had a lot of entries over the years. If you haven’t seen this one yet then I would recommend checking it out.