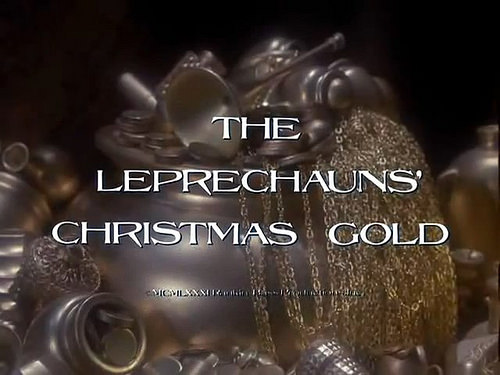 Leprechauns are usually seen as villainous little guys who want gold at any cost. Typically they will resort to violent means as soon as possible in order to fulfill their ambitions. At the same time then you also have the shoemakers who are always seen as nice in the various stories. Well, this special finally explains that both sides separated a while back. The shoemakers are just a lot nicer.

The short starts with a sailor crash landing on an island from his boat. Then a heavy rain storm appears and the sailor immediately gives up hope that he will ever escape. Fortunately there is a pine cone tree and the hero rips it out of the ground before joining an old Leprechaun for some tea. It turns out that by ripping away the tree the sailor has released an ancient witch who will do everything in her power to steal the gold. Can the sailor make amends or is it all over?

Now that’s the plot on the surface but there is a little nuance here. For starters you have to ask yourself who the true enemy is here. I would argue that the witch isn’t as bad as the Leprechauns. One thing you need to be aware of is that the witch will die if she doesn’t receive a piece of gold before Christmas. Moreover, she can’t steal it, she must convince a leprechaun to give it to her in order for the spell to be broken. The Leprechauns are rich beyond belief so surely they could have given her at least one piece right? The fact that they didn’t shows how petty they are. They kept treating it as an all or nothing issue when that was simply not the case.

The Witch has some reasonable plans to trick the Leprechauns in the meanwhile. Putting a serum into the Leprechaun’s tea was pretty clever and that plan almost worked. Then The witch correctly assumed that the sailor wasn’t the sharpest tool in the shed and moved on to manipulating him. It just gave more reason to remind you that the sailor was certainly not on point.

While I was on team witch I suppose the main Leprechaun was a solid character. He was quick on the draw and would have defeated the sailor if he had a better weapon. His disagreement with the wife was certainly not one of his better moments though. Again, he could have given some gold rather than having to live apart for the next few decades. That part of the plot is actually a little tragic if you think about it. The fact that the lead acknowledges the existence of Gold Fever just proves the point even more. On the other side of the spectrum though, the wife shouldn’t even suggest getting rid of all the gold. Cmon, that’s not very practical.

As far as the animation goes, stop motion still isn’t the best style out there. It’s around LEGO level with that style bring a little more polished at this point. Still, the animation could be worse (Water colors) and as this special is quite short I wouldn’t call it a real issue. The constant crying effect for the Witch was certainly something. If anything the style makes you feel bad for the characters whenever they are sad as they tend to shake a lot.

Overall, This was a fun little special. I do think the movie could have done more to show us why the witch was the antagonist if we were really supposed to root for the Leprechauns. Perhaps it was intentional though in which case the film did a good job. If you haven’t seen this film yet and don’t mind the art style then I would recommend it. It’s not every day that you get to watch a film about Leprechauns after all.