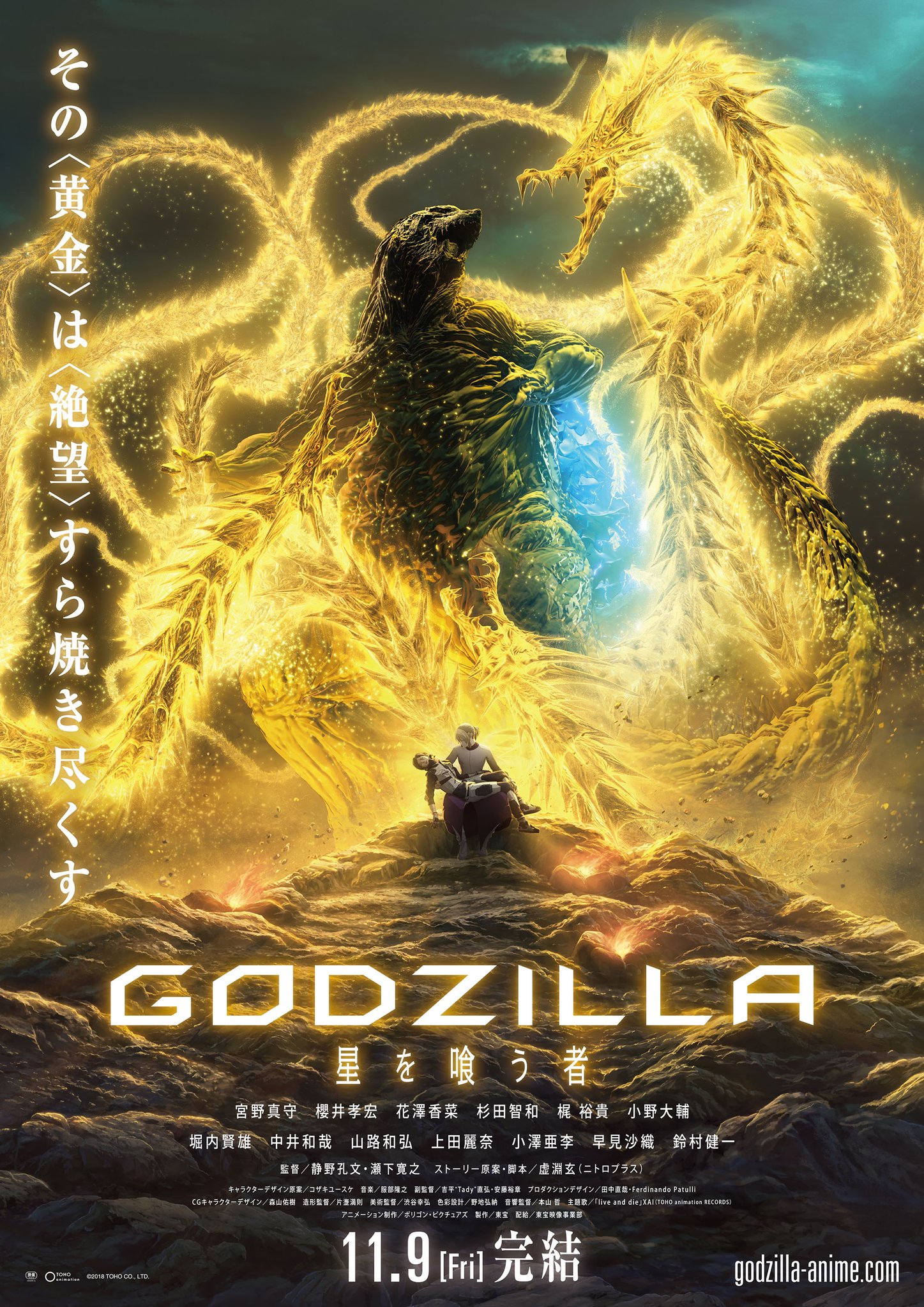 As a Godzilla fan it always pains me to see Netflix churning these films out. The first one wasn’t bad but it did have a lot of red flags. The sequel didn’t do much to help calm my fears and this one ended the trilogy out on a low note. Godzilla is one of the most influential characters in all of media so you just don’t want to see him disrespected like that. There might be a good thing or two to be found here, but you’ll have to make it past the rest of this film to enjoy it.

The film starts off where the last one ended. Godzilla beat the Mecha Godzilla city and is now taking a nap. Humanity has given up once more and must now hope that Ghidorah can defeat him. Metphies has convinced them that Ghidorah can do this, but they will all have to offer up their lives to summon him. Meanwhile, Haruo wants to stop Metphies but he is busy dealing with his own insecurities and lack of will power. Can he help save Godzilla from this threat or is everyone going to die together?

The classic plot of someone having to save Godzilla is never a good idea. I like to see Godzilla as a very powerful Kaiju who does the saving if necessary. He isn’t a hostage to be rescued or a supporting character in need of the lead. He’s the King of the Kaiju, but doesn’t get to look very good here. For the first half of the film he barely appears. Then when he finally does, he can’t even land a hit on Ghidorah. He gets lolstomped the entire time until Haruo is able to make Ghidorah manifest himself and Godzilla throws in some blasts. Godzilla was devoid of character in this version. At least in older films you could tell that he knew what he was doing. In this trilogy he is really just along for the ride.

Ghidorah wasn’t all that good either. At least he actually appeared unlike Mecha Godzilla, but he never assumes his true design. It’s more like 3 giant dragons showing up to fight instead of the 3 Headed beast we’ve always known. He doesn’t have any real character or personality either, but at least it was fun hearing his iconic roar. The scene where he destroys everyone was definitely pretty intense and reminds you that he is a force to be reckoned with.

Before I get into the other characters lets talk about some of the ways this film failed. The first of which is the terrible lack of budget. It’s not really a good excuse to be honest as many films have surpassed such limitations. Still, it is very noticeable here how Godzilla can barely move. His character model appears to be too huge for the animators to know what to do with him. All of the characters are pretty choppy. As I’ve mentioned in the past, this looks more like a Fire Emblem 3DS title than an actual movie. It works for the game because of its style and directing, but Godzilla has none of that. Even with better animation the film would have still failed but it would have done a whole lot better to be honest.

For the soundtrack it’s not as harsh. The film has some reasonable themes like the one in the second film for the aerial scenes. Still, for the most part it’s all just a lot of emotional themes that you can’t connect with. There are some good emotional themes of course and Tsubasa/Naruto tend to claim the best of that genre, but these don’t have that level of heart. The music is just good enough to be considered the film’s highlight though. At least you have something nice to listen to.

Most of the film tries to tackle some fairly deep themes, but does so with such a heavy handed approach that it completely fails. Metphies has been trying to tell Haruo that the only way to beat a monster like Godzilla is to become one. That seems to be obviously fake from the get go so you’re waiting for Haruo to ask the tough questions. The problem is that he never does and just listens for a while. Metphies’ ramblings go on for a very long time and seem to take up most of the film. He’s not actually saying much. It’s a very short message that he continues to convey with different phrasings but ultimately the message is intact. This tells me that the writers just wanted him to seem really smart, but couldn’t get that across. He’s a decent manipulator, but you also have to take into account the fact that the crew was full of suckers. Metphies is a solid villain, but one who is given too much credit in universe. The characters could have just shot or stabbed him and they could have saved themselves an extra 2 hours. Of course it wouldn’t matter much in the end since Godzilla would still rule the world, but at least they wouldn’t have to deal with 2 kaiju. I do have to say that it was a little too sudden with how the humans were rooting for Godzilla though.

Even without Metphies and his plans, they quickly fell into another civil war. They did prove the point about how the Earthlings will always be getting into wars and fights. Having humans’ cosmic purpose be to bring about the Kaiju would certainly be an interesting twist. I definitely didn’t like the main commander since he wouldn’t do anything. He never made any decisions before dying. His 2nd in command was a lot more decisive with how he would react to the situation. Of course, this plot would ultimately never go anywhere which is probably the point, but it still makes you shake your head.

Then you get to the ending of the film which is utterly terrible. So, Haruo may not be the best character around, but at least for the most part he is very determined and always eager to win right? Well, after taking down the main villain he quickly starts mourning and apologizing? Why? I can understand him regretting this path forcing him to take a life, but he shouldn’t actually feel sorry for the character. The guy he took down was evil from the start and had been for centuries. He just murdered nearly the entirety of the human race that had survived. There shouldn’t be any sympathy for this guy. Then Haruo makes an even worse decision to pilot a machine towards the end for a suicide run.

Such a mission accomplishes nothing and he was basically ditching his family for this. If he was by himself then it could work although it would still be a terrible decision, but if he knew that he would do this then he shouldn’t have started any bonds in the first place. As it is, the romance in the film was pretty terrible. The scenes with the Mothra twins are painful and feel unnecessary. I also don’t like how one of them went down without a fight. She was shown to be a fairly capable hunter and has telepathy right? Surely she could have at least done something by this point.

While the film isn’t violent, it does get fairly dark with all of this. Between the suicides and such, Haruo also has murderous dreams with people becoming food. We also see an army get eaten by a dragon, but since it was ethereal they just turned into glowing remains which was a very tame way to handle the whole thing. The film never really has any happy scenes. Whatever we do get always tends to have a twist. Take the twist ending of the film. It completely makes the whole adventure pointless and the same goes for Haruo’s sacrifice. The people just found the next thing to worship and that was the end of that. Why couldn’t the people have at least been a little likable?

I think the main reason you can blame for this film failing is that it tried to be a lot deeper than it actually was. The movie tried to be very sophisticated and complex, but it just doesn’t work. You need excellent writing to do so which this film does not have. The plot isn’t interesting enough to start with. A good survival story on a foreign planet can work well and the film set things up with a lot of potential in the first film. It just managed to squander basically all of it. Again, I think we can blame some of this on the budget as well.

Overall, I didn’t talk about Godzilla much, but there’s a good reason for that. He doesn’t really get to appear in this film. His scenes are very short and in those he functions more as an object than as an actual creature. This trilogy really managed to fall flat on itself but the good news is that I doubt we will get another Godzilla film weaker than this one. It’s just almost impossible to fathom. If you already saw the first two Netflix titles then I suppose you should check this one out. Otherwise, I’d advise you to steer clear of the trilogy entirely. It will just waste your time by the end.