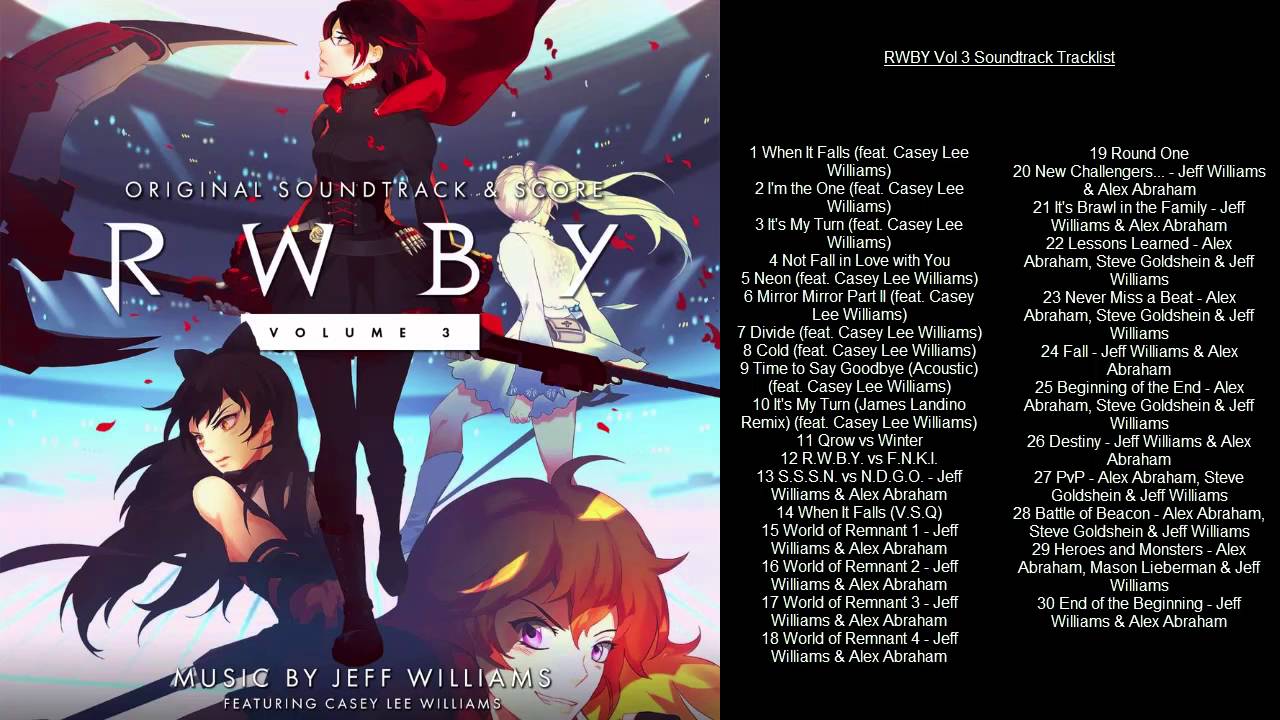 All right guys, it’s time to look at one of my most ambitious articles yet! In this one I rank all of the lyrical RWBY songs from worst to best. It took quite a long time to listen to them all and start the ranks but it was certainly worth it. Some songs were higher than I thought and others were lower. For example, I usually thought of Weiss’ volume 4 song to be her best one, but it actually ended up losing to two of her others. It’s always nice to listen to the classic tunes again to really appreciate where they go. Over 90% of the RWBY songs are excellent so even low scoring ones can be quite great. Naturally the volume 6 tunes are incomplete so we’ll have to work with what we have. That’s enough of an intro though, lets get to it! 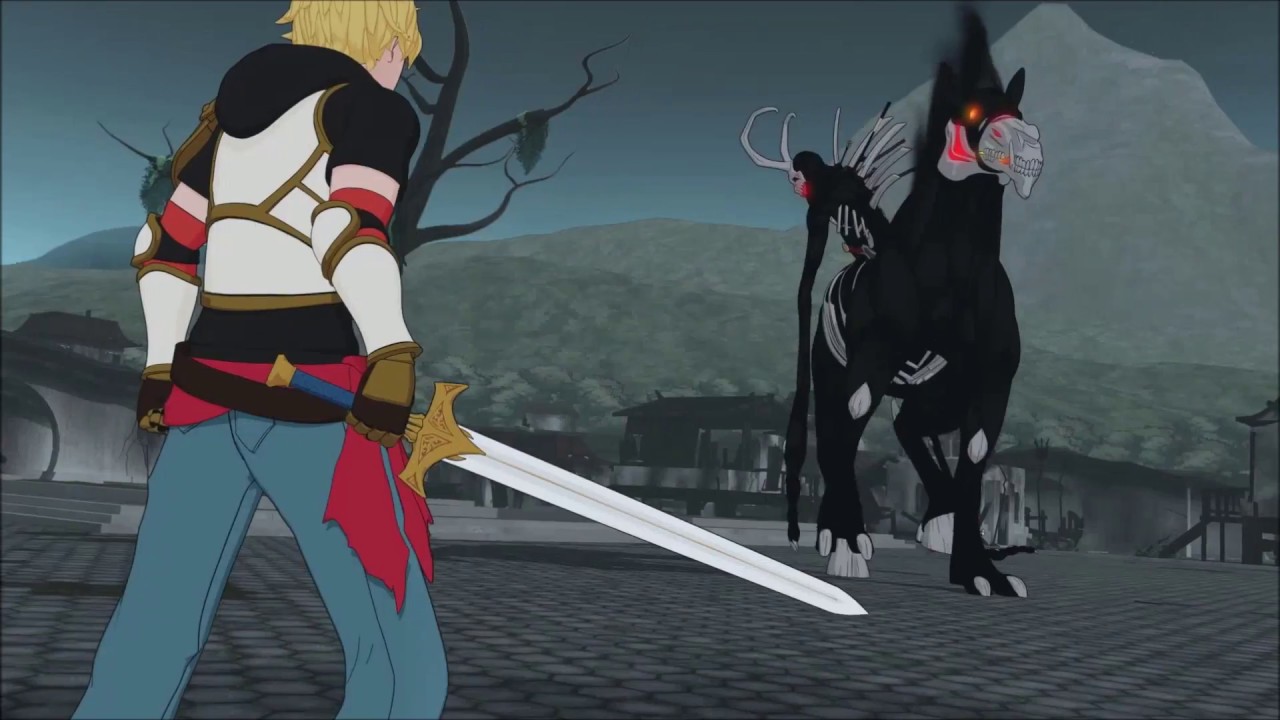 47. Smile –
46. Boop –
45. All Our Days
44. BMBLB –
43. Wings –
42. Home –
41. Shine –
One thing you can see from this collection of songs is that most of them are quite emotional. Nothing wrong with a good emotional song of course. Most of these have fairly catchy beats and all, but they aren’t as blood pumping as the ones that are higher on the list. I love the more adrenaline based songs of RWBY so naturally these would be fairly low. Still, they are well written. 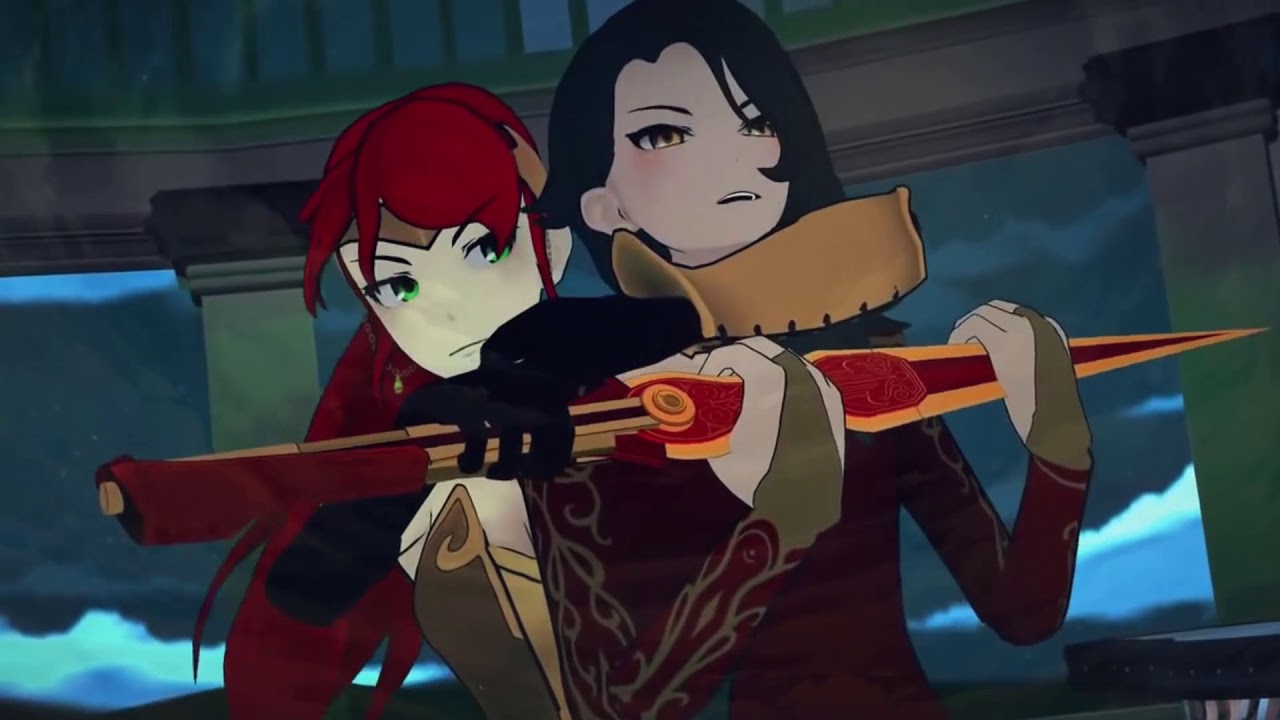 40. Cold –
39. Gold
38. Ignite –
37. Big Metal Shoe –
Ignite is one of the few songs where I thought it sounded a lot better before the full version was released. The rap section wasn’t all that great and some extra instruments were added which takes away from the impact of the song. Big Metal Show is just a bit too loud to fully enjoy which definitely ends up holding it back quite a bit. 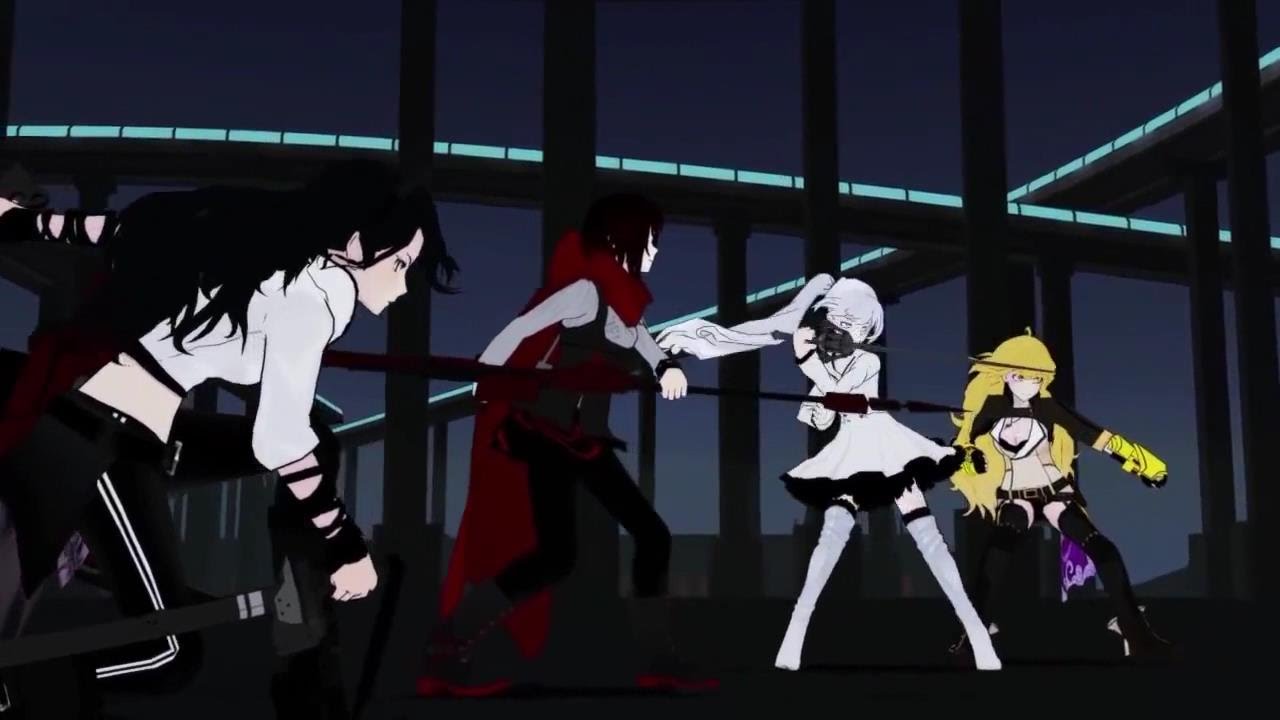 36. Caffeine –
35. Neon –
34. Dream Come True –
33. All That Matters –
While Caffeine is a very action heavy song, it’s just not as soothing to listen to as most of the other tunes. Neon has a fairly catchy theme but the lyrics don’t really work for me. All That Matters was a nice emotional song. I think it succeeded more than some of the other similar style tunes we got. 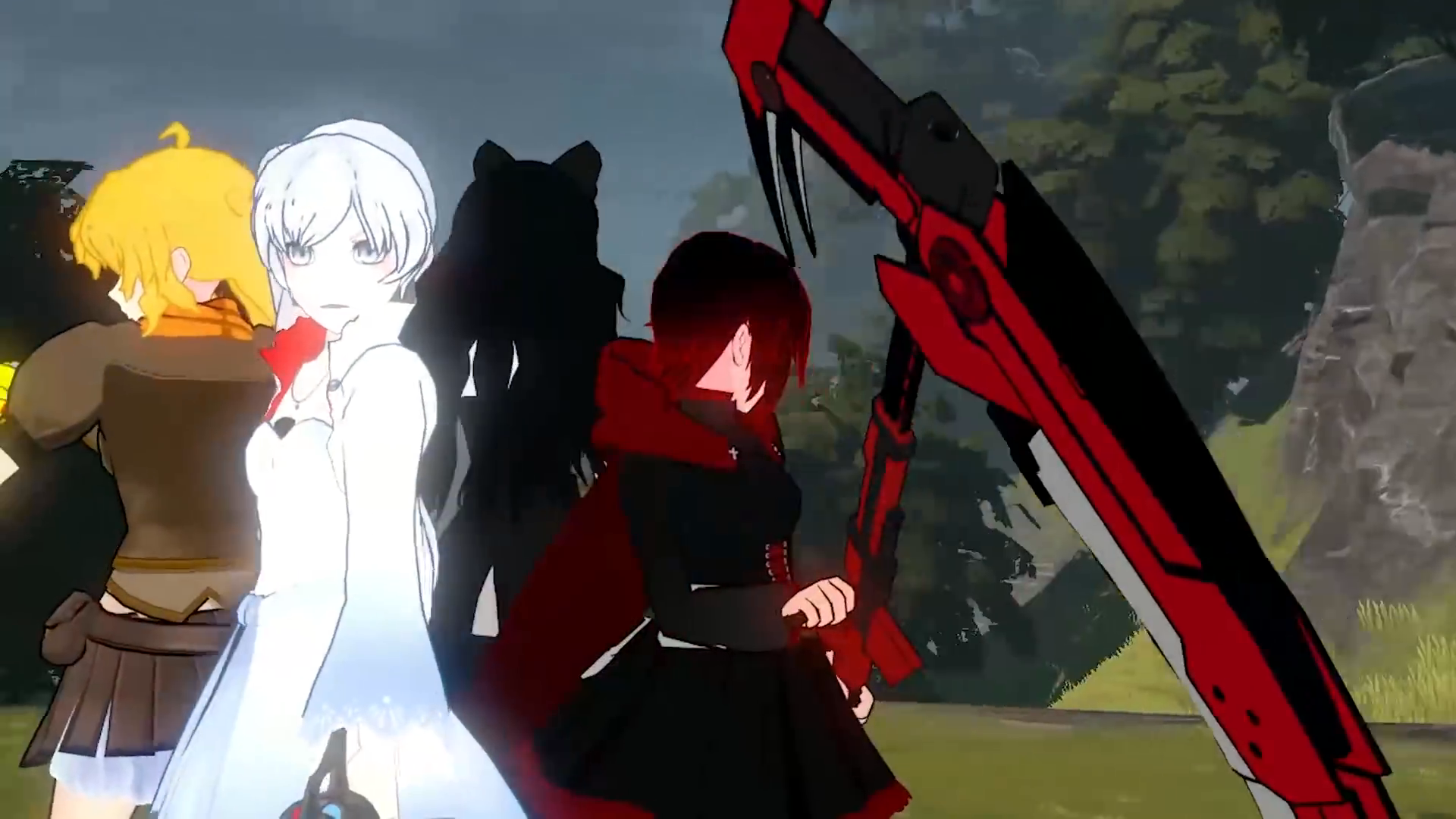 32. Not Fall in Love With You –
31. Like Morning Follows Night –
30. Mirror Mirror Part 2 –
29. Forever Fall –
28. Red Like Roses –
27. I’m The One –
26. Rising –
25. I May Fall
24. Let’s Just Live –
Red Like Roses is definitely a classic song. As the first RWBY song to ever come out it is certainly pretty nostalgic. There aren’t a whole lot of lyrics here, but the beat is solid and really works well with the action scene. We got a good remix in volume 6 and I wouldn’t be surprised if we get another one towards the end of the series. It’s definitely a good example of a song being carried by a great beat. Rising was a good theme song. It may not have the same energy as some of the other openings, but it’s good. I May Fall for example did a good job of showing that the series was about to escalate the stakes quite a bit.

23. When It Falls –
22. Lusus Naturae
21. Nevermore –
20. Bad Luck Charm –
19. Indomitable-
18. This Time –
I was not all that impressed with Lusus Naturae at first. The song’s beginning is rather rocky, but from there it has one of the best beats in the series. Likewise, Nevermore is a really nice song, but just a bit rough around the edges compared to some of the other songs like Miracle. Bad Luck Charm makes for an epic song even if Qrow is whining for most of it. It worked really well for his fight scene. Indomitable is one of those songs we haven’t heard much from yet, but what we got was very nice. I think this song could certainly rise up the charts once we get the first version. 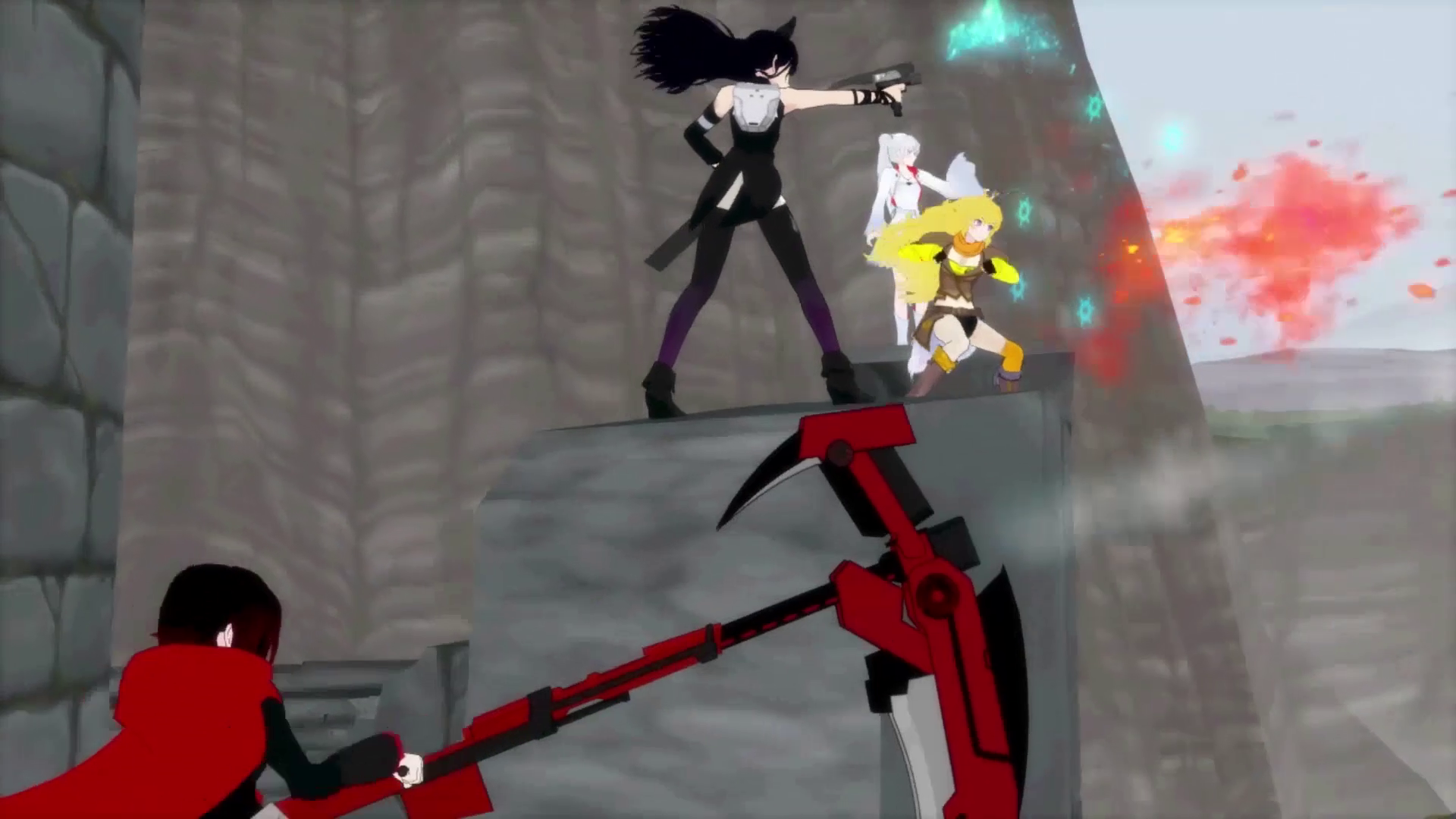 17. The Triumph –
16. I Burn –
15. Sacrifice –
14. The Path to Isolation –
13. This Life is Mine –
12. From Shadows Part 1
The Triumph was a nice return to form for RWBY as things finally started looking up for the heroes in volume 5. It’s a solid intro theme that is pretty uplifting. I Burn (clean version of course) was a great theme ofr Yang as it really highlights her fighting spirit and the brutal nature of her fighting style. Weiss has two songs in a row here with both of them being quite good. Her ongoing plot with the mirror in the songs is always fun and trying to resist her family lineage makes for great lyrics. Then From Shadows does a great job of effectively having two different songs merged into one. The beats go up and down but with rhyme and reason that keeps it on the higher end of the RWBY songs.

We’re getting close to the top now. Part 2 of Red Like Roses is a great sequel to the original. It’s very fast paced and fits any action scene. Miracle was a very impressive song from Volume 6 that helped start the volume on a high note. It’s really well written and the song just pops out at you. All Things Must Die is a great song for Raven/Cinder. It feels like a nice semi sequel to Die even if they might not be in direct connection. Die will always be an excellent song and Lionized really shows you Adam’s original goals. He may not have gone down the right path, but he did help the Faunus get a lot of respect through fear thanks to his actions.

4. Armed and Ready –
This is definitely a great song. It has a perfect blend of action themes while also being fairly emotional. It’s a shame that this wasn’t able to play during the recent Yang vs Adam fight as it would have been awesome to see even if maybe a little too obvious. Still, it’s an excellent song and it’s going to be tough to top that one for the Yang themes.

3. One Thing –
As Neo is one of the best characters in the show it makes sense that she would have an awesome theme to go along with that. We’ve only seen a glimpse of the song so far, but it’s already shaping up to be one of the all time greats. It does a good job of telling Neo’s story as she doesn’t talk in the series.

2. Divide –
This is a fairly close second place. Divide makes for a perfect villain theme with Salem basically gloating the whole time. It was perfectly timed for the credits and would work really well as a battle theme as well.

1. This Will Be The Day –
It probably comes as no surprise that this is the best RWBY song of them all. It’s basically perfect and really helped start the series on a high note by having this as the theme song. I do hope we get this for the final fight in the series because that would be awesome. I’ve heard this song hundreds of times and will certainly keep hearing it as it’s quite timeless.

Well, those are my RWBY song rankings. The series has definitely delivered with a ton of awesome songs. I don’t see any dethroning the number 1 song here, but anything’s possible. Now the wait for Volume 7 continues.

2 thoughts on “Ranking all of the RWBY lyrical songs”