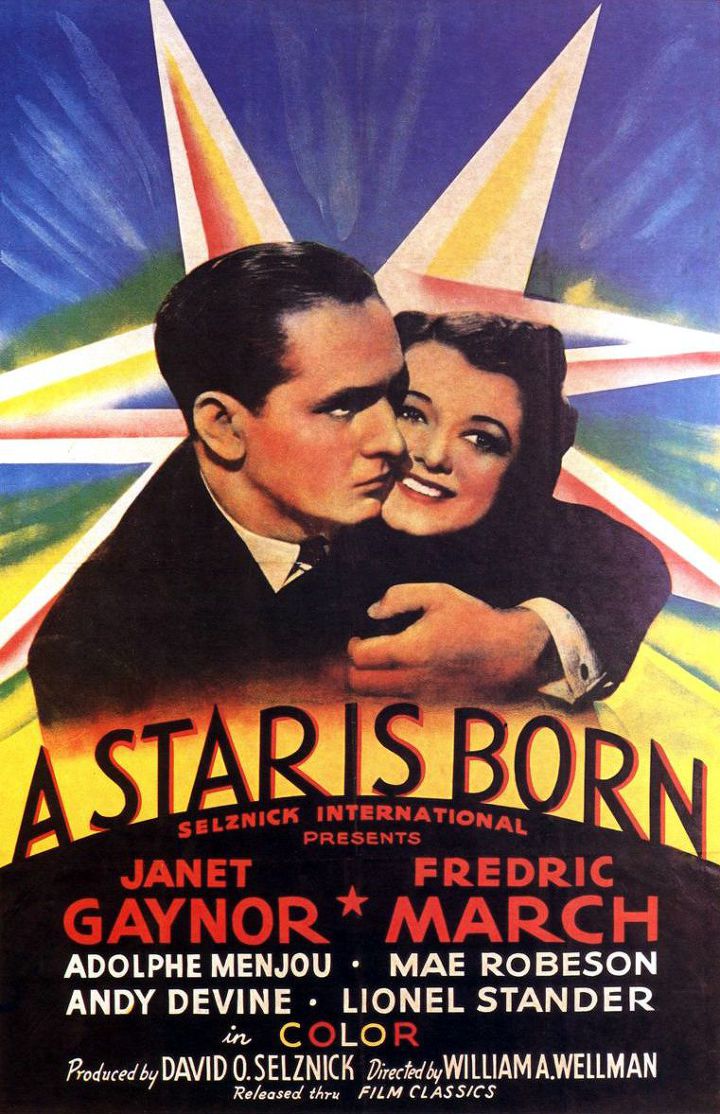 It’s time to look at the original version of A Star is Born. It’s definitely a title that I’m sure just about everyone is familiar with thanks to all of the remakes. Does it really hold up to such an illustrious legacy though? It’s not a bad film, but the second half does ultimately end up hurting the movie. It’s an ending that isn’t particularly great and one character is pretty annoying the whole time.

The film starts off with a girl named Esther expressing her desire to be an actress. Her family almost literally laughs her out of the house so her grandmother tells her to pursue her dreams. Esther heads on the train to Hollywood and gets ready to be famous. The problem is that there are a lot of other people who want to be famous and so she has hit a dead end. She meets a guy named Danny who has some connections, but instead of a part in the picture she is relegated to maid service. Still, this works out as she is noticed by washed up actor Norman who still has a lot of influence within the company. He’s happy to help her get famous so that they can get married, but when she begins to exceed his popularity can he handle the pressure?

One thing I’ve noticed about a lot of the old school male leads is that most of them seem to be really insecure. The instant that the heroine passes them they start getting really whiny and petty. Unfortunately Norman is no exception. He crashes her party and sulks for the majority of the movie. It’s easy to forget that they’re together at times. I’d give him credit for retiring and all, but he then starts to get into fights and tarnishes her reputation. He even gets thrown into the asylum for his antics. Sure, Norman’s over the hill, but he was famous for a while so you’d think that he could at least enjoy that part. Of course, how famous he ever was is probably debatable since nobody seems to even know the poor guy.

Esther is certainly a much better character. Her only weakness is that she gets emotional very quickly as she cries if you insult her. Fortunately I’d say that showbiz went well for her and has toughened her up by the end. She is able to put up a strong front and her talent was shown to be the real deal. She didn’t just go to Hollywood, she excelled while she was there. It’s also good that her granny was around to keep her on the right track as she almost made a big mistake at the end of the film. So, Esther was solid, but I think if she was less emotional then she would have been even better.

Meanwhile we have Danny, who was an interesting character. His voice is incredibly memorable so odds are that it is the part about him that you will remember the most. I’m not sure if it was intentionally humorous or not, but it did make him fun. His first scene was a bit rough though as he starts yelling as Esther for no reason. That scene probably could have been cut out since it makes absolutely no sense. He pretty much gets written out once Norman shows up though. Norman’s pr agent makes for an intense, albeit mean spirited character. He’s good at his job and he can even fight so you can’t ask for much more than that. Meanwhile the owner of the company is a nice enough guy. He kept trying to help Norman even when the actor made that difficult.

As for the ending, while it was unexpected I can’t say that it was good. If anything it just makes Norman look a whole lot worse than he was looking already. Rather than accept the new status quo and turn his act together he figures that it’s time for desperate measures. His answer is never the proper answer to anything. It’s just a way to escape a problem, not a way to solve one. I wonder if the newer films will switch that ending. I hope they do since it will definitely help the character be a little more redeemable.

As for the writing, it’s pretty solid for the most part. When the film attempts some humor scenes they tend to work well like Norman’s beer with a touch of soda gag. The romance isn’t handled quite as well as it’s hard to take Norman seriously since it seems like he typically likes flirting with everyone. It doesn’t make him look all that genuine but I suppose we can give him the benefit of the doubt. Esther just seems a little too trusting and quick to romance as well. Given that her goal is to be the best, I feel like romance would just be a big distraction for her. Ah well. The film’s pacing is pretty solid and although the film is fairly long it never drags on which is always important.

Overall, A Star is Born is a reasonable film. I wouldn’t call it amazing, but it was passable. The idea of someone walking into Hollywood and then rising to the top is a classic, but consistent premise. If executed well it makes for a nice, uplifting story. If it’s cashed in then it ends up being super cheesy and you wonder what happened to the other actors for them to all be surpassed in such a short amount of time. I’ll probably see the remakes soon and I get the feeling that they may have the edge this time, but if you haven’t seen the original it’s probably worth checking out. It is a classic after all.

2 thoughts on “A Star is Born Review”