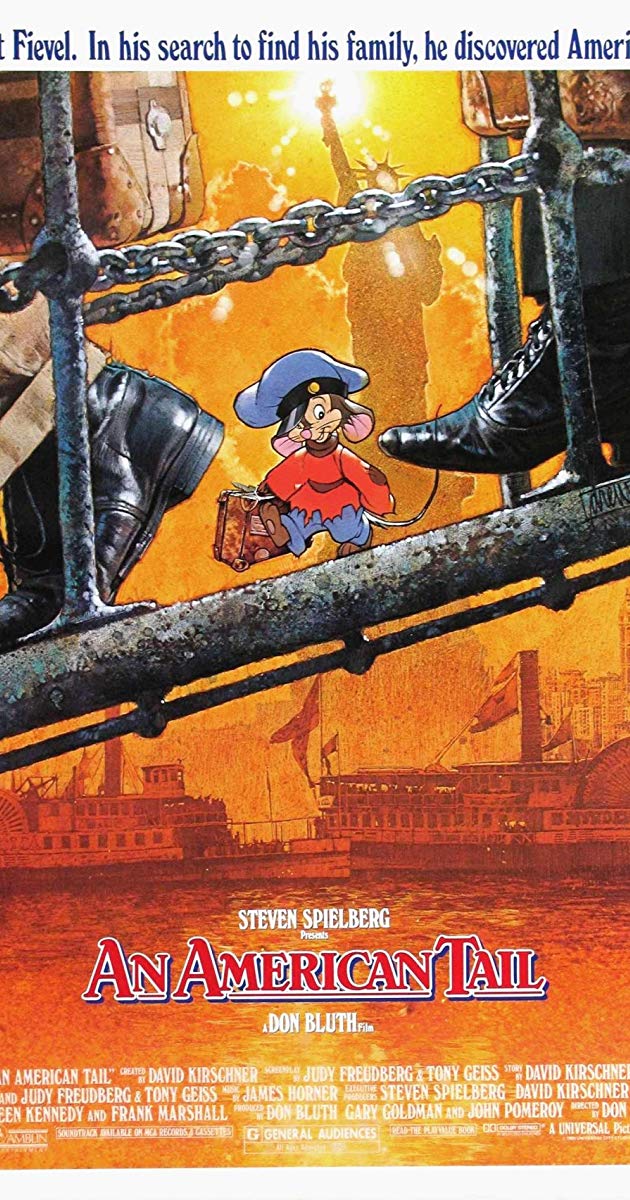 It’s time to look at an old animated film that you may or may not know. It’s certainly not quite as popular as the average Disney film, but at the same time it has certainly earned a reasonable legacy over the years. It’s a decently good film, but one that doesn’t really stand out. It’s sort of going through the motions and is about as standard as you can get. So I enjoyed it, but I admit that it doesn’t really have any replay value.

The film follows a family of mice who have decided to escape from Russia. The country has become too dangerous with the cats running around at every corner. They figure that America will be a lot safer since supposedly there are no cats there. Unfortunately, Fievel manages to get lost from the group and makes it to America via bottle. He must now find his family and endure a lot of hardships along the way. Maybe America isn’t quite as safe as they had all assumed.

It’s a classic adventure movie in that regard as Fievel meets up with a few allies on his way to his family. Two of these allies are Tony and Bridget. Tony is one of those guys with a lot of street smarts and so he is able to help Fievel find his family. He’s definitely super useful and if anything it’s surprising that Fievel didn’t seem to care much. When they are first kidnapped (This is before FIevel actually knew Tony) Fievel quickly busts out and then runs off without checking to see if anyone was following him. Tony has to track Fievel down on his own. While surprising, I was actually impressed with Fievel’s initiative here. He wasn’t wasting any time in finding his folks. While he does get a little down towards the end, he stays pretty strong for most of the film.

Bridget is a mouse who is asking the others to fight with her against the Cats. She believes that they outnumber their oppressors and as such they should join the good fight to rid the world of the felines. The problem is that the other mice don’t have such confidence so her words fall on deaf ears. She ends up traveling with Fievel and Tony which will aid her goals. There’s also a bird named Henri who is a solid ally. He doesn’t travel with the others since he is busy constructing his statue of liberty but he does help by giving Fievel a lot of moral support at the beginning. Without him FIevel wouldn’t have had the will to search for his folks in the first place.

The animation is pretty smooth here. It will definitely remind you of classic Disney in that sense. The character designs are always on point and the action scenes are solid too. The water is drawn really well and the scene of Fievel getting swept off the ship was definitely intense. It’s totally his fault in every way, but still an intense scene. There’s not really much of a soundtrack though and the songs do pale in comparison to the average animated film. There is one pretty good montage song though. While I wasn’t a big fan of the song itself it was fun to see mice from various countries talk about their own difficult experiences with the cats. They kept trying to top each other with their various origin stories and they were all different. None of them were copy and paste ideas and the writers did a good job of making them all pretty serious with fun references to the local cultures.

While Fievel and his supporting cast were good, the family was pretty annoying the whole time. The sister believed that he was still alive at least and kept telling the others that they should look for him, but meanwhile the parents lose hope almost immediately. I guess the idea of a mouse surviving amidst a huge storm in the middle of the ocean is farfetched, but at least to appease the sister I’d like to see them make an attempt early on.

Meanwhile the only weak part of the film was probably the romance between Tony and Bridget. It doesn’t really make any sense with how rushed it is. They fall for each other almost instantly and considering their hard boiled characters it should take a little more time to thaw out and go for romance. It’s not played up too much I suppose, but it’s enough of a distraction where the film could have used that for more chase scenes or plot developments. Beyond that I’d say the writing is good. It can be a bit annoying to see the characters so close to each other the whole time, but constantly not seeing each other, but I can see that happening in a big city. Fievel should have listened to Tony more though, I think that would have sped up his journey.

Overall, An American Tail is a film that plays it by the books. There aren’t any real wrinkles to this story but nothing bad either. It’s just a classic adventure where you get to see the world from a mouse’s point of view. It doesn’t have the personality of something like Stuart Little but it’s still a film with quality confirmed. If you haven’t checked this movie out yet and want a fun film to check out this one’s a good pick. It’s short and to the point. If you’re wondering whether or not it beat the Little Mermaid though, I gotta say that Mermaid easily defeats this film.

2 thoughts on “An American Tail Review”