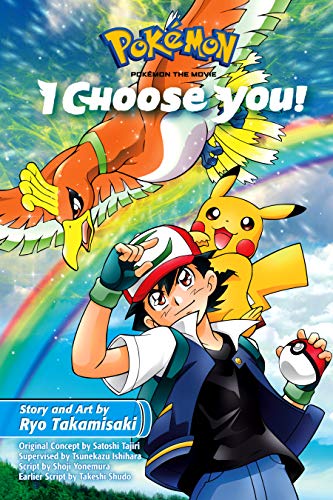 Pokemon’s definitely been through a lot over the years. It first had to deal with the pressure of being the greatest video game series of all time and then it started one of the longest running anime of all time. What other challenges could await it from there? Well, there’s the manga industry but Pokemon Adventures pretty much has that covered. As a result the movie based manga usually don’t really try to do anything super special except to keep on with business as usual. I didn’t care much for the movie this manga is based on which limits its potential, but ultimately I guess I would say it’s a little better. It’s pretty much a straight adaption though.

The manga starts with Ash getting ready to start his Pokemon journey. Unfortunately, he overslept and all 3 of the starters have already been taken. He’s forced to start off with good ole Pikachu. The two don’t get along at first, but gradually they become pals. Ash then runs into Verity and Sorrel along the way as they all wanted to catch Entei. It doesn’t go well and the 3 of them are forced to bond over cave stories as they wait for the rain to stop. The adventure will test their bonds and Ash will have to find out if he really has what it takes to be a Pokemon Master.

Right away you will have to remind yourself that this is a pretty inexperienced Ash. It’ll make the adventure less painful as he takes a lot of Ls left and right. Part of why reboots like this are tough is that you don’t really want Ash to be a beginner yet again. The wounds are still fresh from when he lost every other league. For the most part Ash is still solid here though. I definitely didn’t care for the scene where he loses to Cross though. Ash was probably going in a little too hard during the fight, but how do you really know when to stop? Typically in a Pokemon battle you go on until one of them is knocked out but I guess if they look weakened enough then you should pull them out first? That part always seemed a little inconsistent to me, but I guess we’ll roll with that.

Ash was being manipulated by Marshadow later on, but it was still a bit iffy how quickly he was ready to ditch his Pokemon. He’s just not nearly as tough or confident as his TV show persona and I think that does play into why this movie/manga was just not quite as solid. Meanwhile his two partners also aren’t all that great. Sorrel doesn’t really want to be a Pokemon fighter, he just wants to research and meet all of the legendaries. He gets an origin story that is pretty dark. It ends pretty quickly in the manga, but it’s still something that you really don’t need in a Pokemon manga. The Pokemon should lose fights now and then of course, but dying for no reason is definitely iffy. Pokemon are very strong so to just lose to natural causes is a bit iffy.

Meanwhile you have Verity who is sort of like a nicer rival to Ash although they don’t get to fight much. She’s a pretty fun character, but ultimately she doesn’t get a whole lot to do. I’d have liked her to have gotten some more of the focus and maybe an extra fight or two. I don’t think she would have been able to defeat Cross, but if she had that would have been pretty neat as well. As for Cross, there’s definitely no way I was going to like him. He’s like Paul in that he doesn’t care about Pokemon and is willing to hurt the ones that he has. A good rival still has respect for his Pokemon like Gary. Gary may not have been the most pleasant person to be around, but he always treated Pokemon with respect. Cross has a character arc by the end, but it’s so sudden and a complete 360 that you can’t take him seriously.

As for Marshadow, I always liked the design of this Pokemon. He’s not the most interesting villain though even if he basically did wreck Ho-Oh. I feel like Ho-Oh is probably the strongest Pokemon who has yet to look good in one of these things. The legendary birds in general seem to take a lot of Ls when they appear. At least we got some decent fights though. None of the fights are all that long here (The longest felt like it was Cross vs Ash round 1) but the art is excellent so the battles that we do get look pretty good. Art plays a big part in a manga of course and there was clearly a good amount of effort put in here.

I think one of the problems with the story is that it’s going through all of the motions, but there isn’t anything particularly memorable about this adventure. There’s no hook nor is there any reason to re-read this. It feels like an average episode with Ash and since it’s not even the version of Ash that we’re used to there isn’t much to it. Still, it almost sounds like it would get a negative review from what I’ve written so far so let me just point out that it is still a good manga. Just because it can’t match up to the other titles doesn’t mean that it is downright bad. At the end of the day it still has good action scenes and a reasonable cast. The artwork is solid and that’s really all you need. It’s not great or even very good, but it gets the job done.

Overall, This is definitely not my favorite Pokemon adventure and it’s a relatively weak one as far as the movie tie-ins go. Still, it’s not a bad one and I do feel like it’s a little better than the movie version. Maybe that’s because when reading through it the iffy scenes don’t last as long as in the movie. Maybe there were subtle differences here that made the whole thing feel more intense. Whatever the case may be, I’d recommend experiencing this story in manga format instead of going for the movie version. Still, I look forward to the day when the movies are with Ash and friends in the present again instead of these alternate universe titles. It was a cool concept, but the execution just hasn’t been there thus far. We’re in the age of nostalgia right now so give us a big movie with the return of Gary. Maybe hype it up as the big tournament where Ash finally wins. There’s a lot of ways you can make a satisfying Pokemon movie after all, the company just needs to go for it.