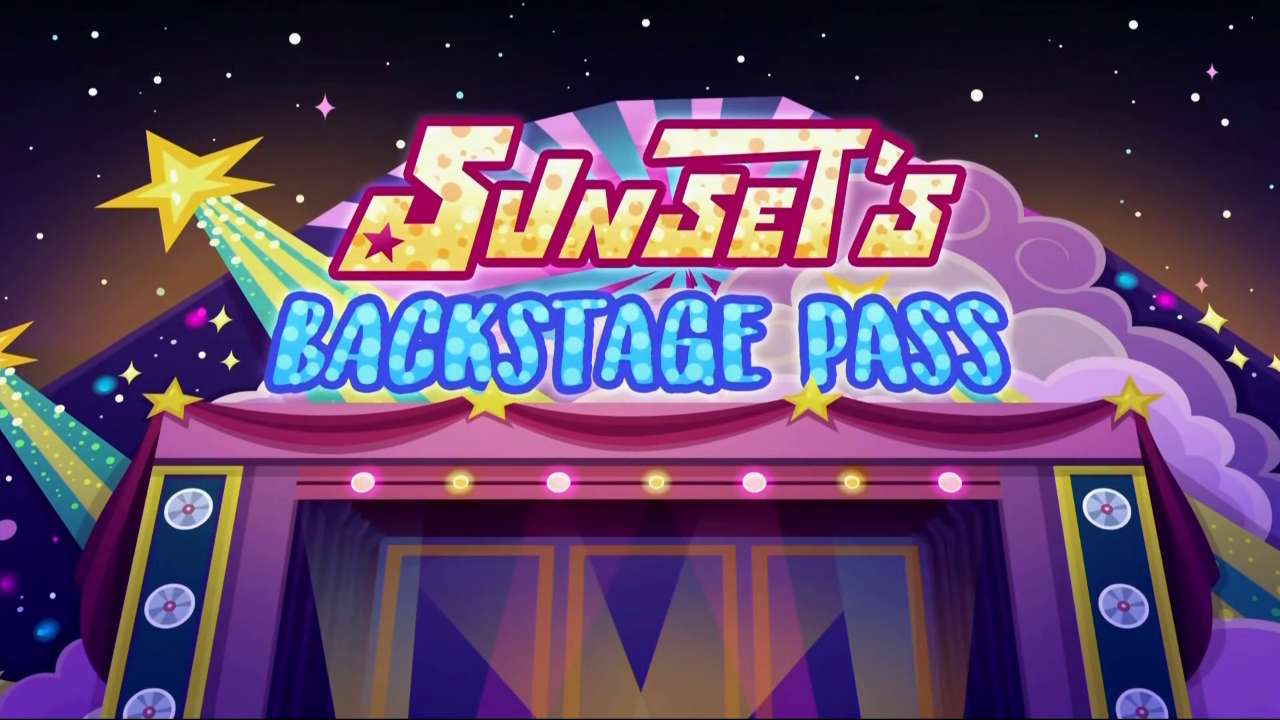 It’s time to look at the next big Equestria Girls special. This time Sunset takes center stage once more as she tries to enjoy a show despite Pinkie Pie’s best attempts to sabotage the whole thing. Sunset’s a very crafty character though so she definitely has some plans on how to stay ahead this time around. It’s a pretty nice homage to Groundhog Day which makes for a fun plot.

So the special starts off with Sunset and the gang waiting for the event to start. Sunset is hyped and the others are glad to be here even if they aren’t really planning on checking out the show. Only Pinkie Pie also wants to go, but she chooses Churros over everything else and a series of wacky circumstances causes Sunset to miss out. She wishes that she could try again and her wish comes true. Now she has a chance to go to the event. The problem is that the day continues to reset every night so now Sunset has to try and get out of the time loop, but is that even possible?

You definitely feel pretty bad for Sunset here since she is trying her best to accomplish her goals, but Pinkie Pie is here to stop her best attempts at every turn. That’s not the kind of friend that you want to have at your corner. You can maybe make the argument that Pinkie Pie doesn’t know better at first, but in some of the attempts Sunset really tries to explain to Pinkie Pie why she doesn’t want anything to go wrong and Pinkie doesn’t care. She even leaves Sunset alone to fight the villains while she grabs her Churros later on. It’s clear that Pinkie has got her priorities in a pretty iffy order here. She’s really a bad character in this special. Pinkie Pie has always been one of my least favorites as the series went on and she became more annoying than quirky, but this special probably takes the cake.

The rest of the Mane 6 don’t get to do a whole lot. When push comes to shove they do take Pinkie’s side over Sunset’s which is understandable since they are closer friends, but they aren’t particularly useful in this adventure. Twilight in particular may be disappointing for fans because she just restates the obvious and barely even tries to help Sunset. Sunset is truly on her own in this one, but she does a good job all things considered. She continues to learn more each time the day is started over and tries many different ways to get out. Her idea of being nice to Pinkie Pie in one timeline was good even if that surprisingly wasn’t the way out. Then she tracked down the villains who were red herrings.

Make no mistake, there are some villains in this special, but the old ones aren’t actually behind this latest series of events. They are really just around to sing songs and try to make a career. That doesn’t leave too many suspects, but I suppose I still won’t say who the villains are just in case. I didn’t mind the actual villains. They were pretty reasonable even if they didn’t get a lot of screen time. Their goals are a little weaker than the previous antagonists, but I still wouldn’t say they were terrible or anything. At the end of the day the still did manage to go pretty far.

As always the animation isn’t bad. It’s definitely not really my style, but it’s all pretty clear so you always know what is going on. That’s a good thing. There aren’t any real action scenes to test the animators this time, but you can’t win em all. Surprisingly we didn’t get a lot of songs this time. In fact, the mane 6 didn’t get to sing so it was up to the supporting characters this time. The song was actually fairly catchy though. I don’t think you’ll really remember it for very long, but just having a song can definitely go a long way.

As always there is a moral here, but how effective it is will depend on how you tolerate Pinkie Pie. The message is that even if you have to miss an event, being able to hang out with your friends is more important. That’s certainly true, but there’s also a reason why they say you never take a close friend to your favorite cafe. You want to keep your spot separate in case things don’t go well. So since Sunset was really looking forward to the play it may have been safer to go by herself, but these guys usually do everything together so it makes sense to go with Pinkie and the others. I just think that Pinkie should have been a lot more considerate all things considered.

The writing is strong and the pacing is good. I do think this special threw more twists and turns at you than some of the previous ones. At around 25 minutes in Sunset realized that her whole theory was wrong and the characters had to do some backtracking. The kept evolving with their theories and wasn’t very linear which is good. You’ll definitely be engaged with what’s going on and while it’s played for humor, you can also feel Sunset getting more and more desperate since literally re-living an entire day is definitely rough. She was here for weeks which would drive anyone crazy. Sunset managed to keep it together, but I’m sure she’ll be a lot more careful about what she wishes for going forward.

Overall, Sunset’s Backstage Pass is a fun special. It definitely delivers on the usual MLP qualities you would expect here. The characters are nice enough and it’s just a pleasant plot that you could really show anyone. It may not be ground breaking or one of the all time greats for MLP, but it was solid and a pretty good way to end the Equestria Girl movies. Of course I do hope they keep the brand going though. You never want to see something just end like that. If you haven’t checked this one out yet then I’d recommend changing that.