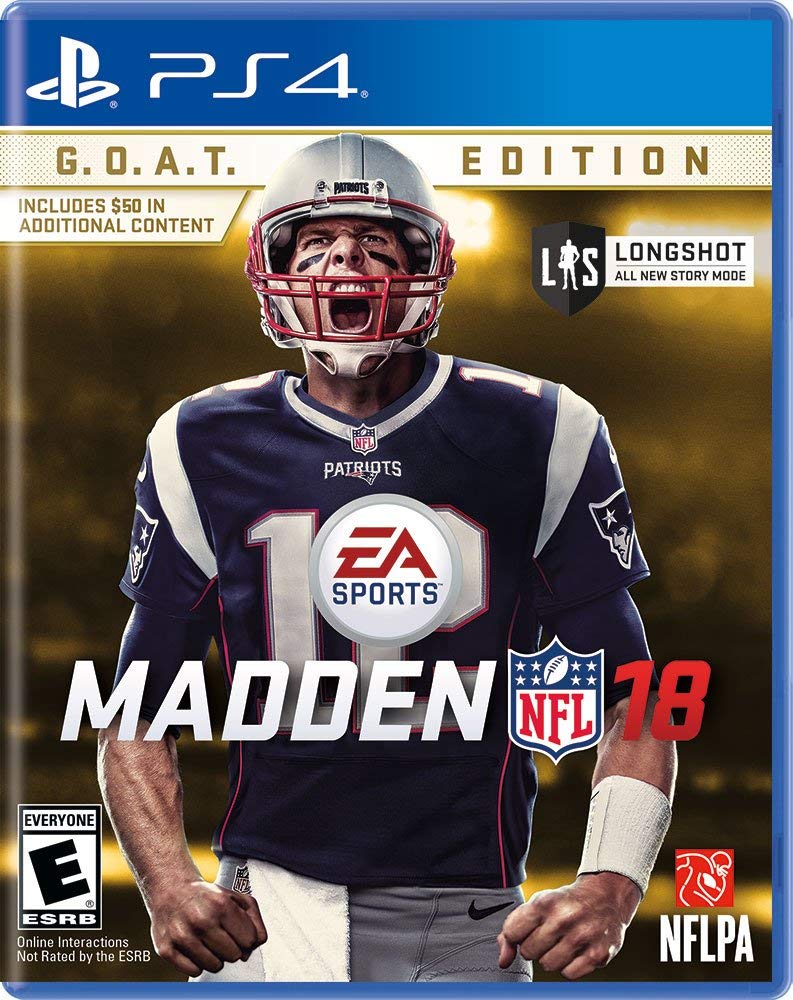 It’s time to look at the next Madden title. I’m really close to being caught up now, but I’ll likely wait a year before getting 19 so it drops down to the 5 dollar bin. The Madden games have historically been great. They’re consistently solid across the board and 18 is naturally no exception. This one even added a story mode of sorts although I didn’t try it this time. Basically you start out as a college kid who gets signed on to a team and during the game you rise up the ranks. It’s a pretty cool concept and while I would mainly be sticking with the tried and true quickplay battles, more options is never a bad thing.

Madden 18 has really got everything you can ask for. You can practice, play online, start a franchise, play the story, etc. They even added more options for the gameplay. You can now choose between arcade style, basic, or online for glory mode. I choose the last option of course because I want to be ready to take down an opponent at any time. It was definitely a lot of fun too and they finally brought speed back into the equation. Yes, you can run fast again and that is huge. I’m wondering if Madden 17 might have had some option in the back end where you could have switched the style. Either way, 18 definitely gets credit for showing you how to do it. It makes running the ball a lot more fun when you can just take off like this.

The gameplay is the same as it has been for the last 18 years so there isn’t much to say about it. The goal is to get across the opponent’s end zone to score some points. Score enough and you’re home free. On Offense I really like passing the ball, but it is always a lot riskier. Thanks in part to the whole “aggressive ball” mechanics you never really know if your guy is going to make the pass. There’s an equal chance that the other team’s player is just going to rocket from across the sidelines and knock the wind out of you. If that happens then you’re gonna fumble or you’ll end up throwing a pick 6. You want to only throw bullet passes and you want to do it when your guy is wide open. As a result I have to be really careful about where I throw it. You just can’t toss the ball in the air and make a play anymore.

Fortunately as I mentioned they brought the running game back. My favorite thing to do is pick a Hail Mary play and then run it with my quarterback. Most of the time you can gain an easy 10 yards. I average 10-11 yards per run with the quarterback. He almost always gets 100 yards by the time the game is over. It may feel a little broken at times, but I think a quarterback should be really mobile like that. It really opens up the offense. I get how it makes the defense a lot trickier to control, but I think it’s a fair trade considering how much better the ball covering is now. Running the ball traditionally is also good. You tend to pick up 2-3 yards. Madden continues to feel more and more like the real deal. I even get final scores that are like real games like 10-7.

On defense I’m mostly still at the mercy of the computer. I always pick a guy to try and sack the quarterback, but I only get 1-2 sacks a game. Otherwise I just hope I’m in the right place at the right time to make the stop. Otherwise I just get to watch and weep as the guy shakes a bunch of tackles and breaks an 80 yard run for a touchdown. In my defense, I usually shut the run down pretty well but when it comes time to pass then it’s all up to the luck of the draw. The computer either runs right through me or they throw some terrible passes and punt.

Special Teams is always fun even if it’s very brief. You get to do some free style running and that never gets old. Kicking the field goal and punting are still not my favorite with the new system though. It’s a lot harder since you have to press the X button at just the right time multiple times to launch a kick. It definitely does make kicking a little riskier so if that was the goal then the game succeeded. I just don’t think it was necessary. Ah well, it’s not like that really hurts the game all that much at all. A large part of the Madden experience still comes down to how quickly you can react. On any given play there is always an avenue for success when you’re on the offense. The defense’s job is to give you as little time as possible to make the right call. It’s just really hard to keep track of so many guys running on the field at the same time, but it’s exactly what you’ve got to do if you want to secure the win.

The graphics here definitely look quite amazing as expected. The players are all so lifelike and the presentation is still quite amazing. I enjoy the sound effects and the music doesn’t seem bad. You won’t really notice it aside from the main menu though so unless you stick around there for a while you really won’t notice it. The game has limitless replay value with the online mode and all the other content it has got. It’s always hard to see how you’d be ready to switch up to the next game in the following year. I suppose if you’re playing this full time then maybe you can get through it, but otherwise it probably feels like the next title is right around the corner.

Overall, Madden 18 is definitely an excellent title. Sadly the G.O.A.T. version doesn’t really change anything for me since I don’t have the online and it’s all expired by now, but the vanilla version will do quite fine. For 5 bucks you also can’t go wrong here. It’s a big upgrade over the last Madden I played and this one will rank up there with some of the classics that I’ve played. If you even remotely like Football then you’ll love this game. EA may not have the best rep, but I can say that they’ve never phoned in a Madden title. They give it their all year after year.