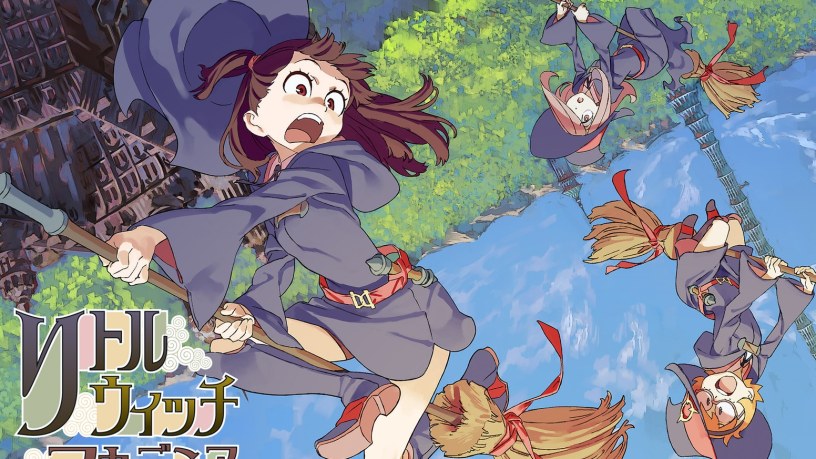 It’s time to look at the fairly well known Little Witch Academia special. I remember seeing this one mentioned online a lot and always wondered if it was made as some kind of rival to My Hero Academia. The timing was just coincidental I’m thinking though because the two aren’t very similar at all. It’s a pretty fun fantasy story and feels like like Spirited Away or the other big anime films that can also make it as a Pixar type film. It’s a good movie that can appeal to just about anyone. It introduces the characters right away and gives us a good debut adventure.

The story starts by introducing us to Shiny Chariot. She is pretty well known to the humans and serves as a shining example to how Witches are. Atsuko has always wanted to be a witch and thanks to Chariot’s grand display Atsuko reaffirms her wish to join the school. She has now made it and must aim to do well in her classes. It’ll be difficult as she didn’t grow up with magic the way that most of the others did. She is a quick study though and makes it to the team phase with two other girls named Lotte and Sucy. The 3 of them must climb a tower and find some items in a scavenger hunt, but when a dragon shows up the danger becomes very real.

You’ll get some Harry Potter and RWBY vibes here as well. It’s an all girls school since it’s for witches so that part is like RWBY (Yes, there are some guys in RWBY, but rarely are they important) but it’s less action based and more of an adventure/fantasy like Potter. The characters even have wands and such to use their spells. I think starting off with this tower exploration was the right move since it feels like a video game mission and lets the characters interact with each other in a fun environment. Now lets take a look at the cast.

Atsuko is our lead and she’s a good main character. Her determination and youthful energy are what you would expect upon seeing her and she does not disappoint. Wherever there is action you’ll find her at the center. Atsuko isn’t irresponsible though and stays determined even when the others don’t take her seriously. None of the other characters like Shiny Chariot, but Atsuko doesn’t take it too hard. Then she comes in clutch during the climax with the legendary scepter weapon and manages to save the day. I definitely look forward to seeing more of her. Her teammates Lotte and Sucy are less impressive. Sucy’s fine, she’s fairly aloof and doesn’t talk all that much. It’s hard to get much of a gauge on her character beyond that but her spells are quite potent. I can easily see her being the secret weapon on the team. Lotte is more of a book worm and fairly timid. She’s not my kind of character but I wouldn’t say that she is bad.

Shiny Chariot is the legendary witch that humans like, but ironically witches don’t. She seems nice enough so I have to disagree with the witches here. They don’t like her theatrics, but as we learn in the next movie, humans and witches don’t get along very well. Isn’t it good that she is bridging the gap? While it’s not outright stated, it’s heavily implied that she was forced into early retirement and now works as a teacher in the school. Her teacher persona is basically like Clark Kent. She can’t act very tough in this one, but it works well enough since it isn’t the real her. I do hope we get to see Chariot fight again soon though.

Finally we have Diana who is the rival character in the series. She is a prodigy and typically can master any spell with ease. The tower is pretty much a cakewalk for her. What I like about Diana is that she’s portrayed as a tough character, but she never becomes petty. A lot of times the bullies will show up to make fun of the main character for no real reason and quickly get jealous. Here Diana does get into it with Atsuko, but only in passing and it never becomes a priority. Diana isn’t suddenly switching life goals just because Atsuko is here. She also does her best to help against the dragon at the end. Diana is easily my favorite character and I look forward to seeing her return. She’s definitely a dependable ally that you can count on to always see the bigger picture.

The animation definitely looks really good. There aren’t a lot of flashy scenes to really let the animators show off, but the make the most of each moment. The opening scene with the monster and Chariot looks good and likewise for the climax. The rest of the film is smooth as well. You definitely can’t take away any points on this one. The soundtrack is fairly standard so that part doesn’t really stand out. What you’re really here for is the quality writing and pacing which is on point. The characters are all pretty realistic and the film doesn’t have any real negatives. It’s just a pleasant experience and one that will have a lot of replay value.

Overall, Little Witch Academia is a title that I would recommend. It’s pretty short as it skirts the line between a mini movie and an episode, but it does a good job of setting up the universe and characters right away. By the end of the film you’ll have a good understanding of the world and what’s going on. I’ve already seen the next film so I’ll have a review up for that one as well pretty soon. So stay tuned since the Little Witch adventures are not over yet.