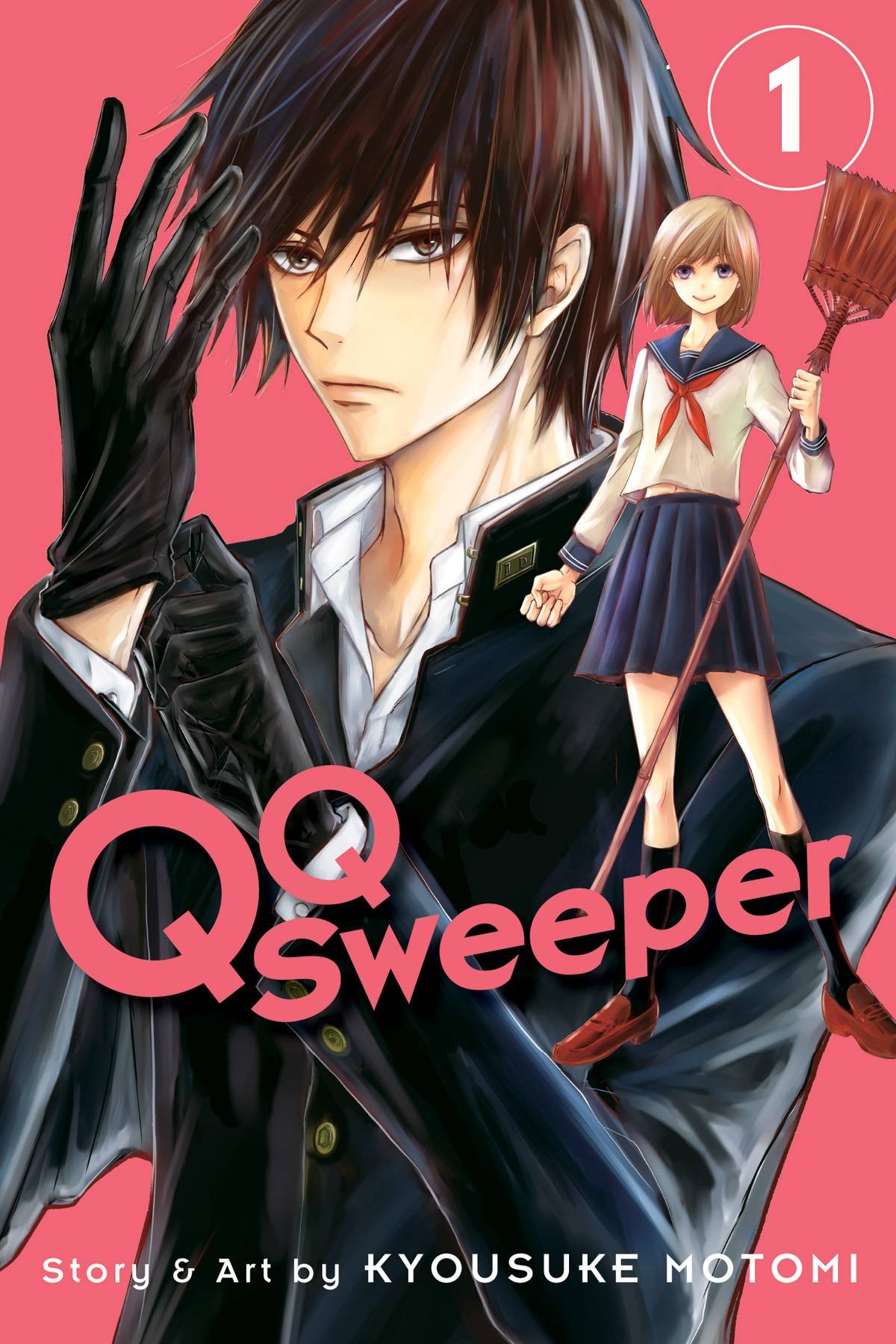 It’s time to take a look at a manga about cleaning. That’s definitely a first for me and it’s an interesting concept. I don’t think it’s something you can keep up for long, but the it’s up to the writing and characters to hold the story. Unfortunately the main cast here is fairly weak so they do have a very tough time holding this adventure. It’s only 3 volumes and I can see why it ended so quickly. It feels like it was cancelled with how rushed it is, but a sequel series started almost immediately so maybe it was always part of the plan. It’s not a bad series, but it’s definitely not the most exciting one out there.

The manga introduces us to a girl named Fumi. She has had a tough time of it because everyone has always told her that she is cursed. Fumi believes this as well because bad things seem to happen when she is around. As a result she tries to distance herself from people ansd does her best to ignore the bullying. One day she meets up with a sweeper named Kyutaro. He makes the school clean, but it turns out that he does more than that. He is able to clean the minds of others and destroys the parasites that plague the human world. Fumi is eager to help out and becomes a junior sweeper. Can she help make the world a better place and ultimately use her skills to clean her curse?

As always the classmates and school are all pretty mean here. THey’re very quick to turn on Fumi so I’m glad that Fumi has some friends here. There are two in particular who stick with her throughout the whole adventure even when the class turns against her. There is a bugmaster who is orchestrating this and manipulating the school, but it doesn’t take away from the fact that a lot of these classmates are gullible. You have 2-3 guys who talk against the bullies, but all they do is talk so it doesn’t help a whole lot. I’d like one of them to have been a little more pro-active.

Fumi is a good lead although I feel like she didn’t get a whole lot of character. We see her toughness with how she comes prepared for the bullying without breaking down or attacking everyone. She isn’t super uqick to forgive the bullies either which is realistic because then they’ll just walk all over you. At the end of the day she does want to be the best sweeper she can be and does pretty well in the role. She has some connection to the queen and other vague things, but those plots don’t get to wrap up here. I suppose that will be in the sequel. The manga also hints that she was someone else a while back before losing her memory. It’s likely all connected to this big plot.

Kyutaro doesn’t get along with people at all and that works out in his favor a few times as he helps get Fumi away from the bullies. He acts as if it’s because he needs to clean which drives them away and then he consoles her. He is haunted by the disappearance of another girl he knew a while back so he is determined to protect Fumi. One thing that holds Kyutaro back is how he mixes the two up and gets delirious at times. Obviously this is to lead up to a romance at some point, but it’s not nearly as well developed as it could be and so I don’t think it’s going to end up working very well here.

Koichi is the leader of the Sweepers and along with the lady who can transform into a bird they are the most experienced. Naturally they don’t tell Fumi and Kyutaro much until it’s too late which can always be a bit annoying for those characters. I didn’t really care for Koichi. He can be helpful at times, but not often and does have a tendency to snap at the other characters. The lady is fine, but I do hope that she can fight and isn’t relegated to purely being a guide.

Ataru is the main villain in the series but he’s definitely not one that you will remember for long. His goals are fairly vague aside from causing anarchy. I guess he just wants to mentally destroy Fumi and bring out the queen within her. Of course, the queen can do whatever she wants to this plan seems incredibly risky to the bug faction. Why put such a powerful piece into play when there’s a good chance that she won’t be on your side? He’s also one of those sketchy villains who loses sight of his goals just to go for power plays and humiliation tactics. There’s just nothing likable about this guy and he drags the main cast down further.

All of the themes in this manga have just been done better in other titles. The cleaning angle does at least change things up compared to other titles, but it’s ultimately not that important when you think about it. They clean the area to help make the infected feel better but mostly this is done through talking and the cleaning happens in the background. Take the cleaning angle away and the series really wouldn’t change all that much. I’m glad it’s there since it’s one of the better parts of the series though.

QQ Sweeper’s biggest problem is just that it’s a little boring. I’ve already talked at length about how the character cast isn’t all that good and it’s always hard to make a manga great without them. Especially since this isn’t an action series then the character interactions are very important. You need a good story and characters to proceed and this title has neither. I will grant you that the manga has some promise with some of the story directions they are going in. If the appearance of the queen turns this into more of an action series then the sequel will be hype. The series just has to show me this first and of course it would be helping the sequel, not this one.

The art isn’t bad, but it can be a little convoluted. It certainly isn’t as clear as a lot of other titles that I’ve read. You’ll be able to read it without any real issues, but that does mean it probably won’t be able to keep up with most titles there. It’s only 3 volumes so it’s not like the artist had a ton of time to improve during the series though. We’ll see if in the sequel the art looks clearer or not. 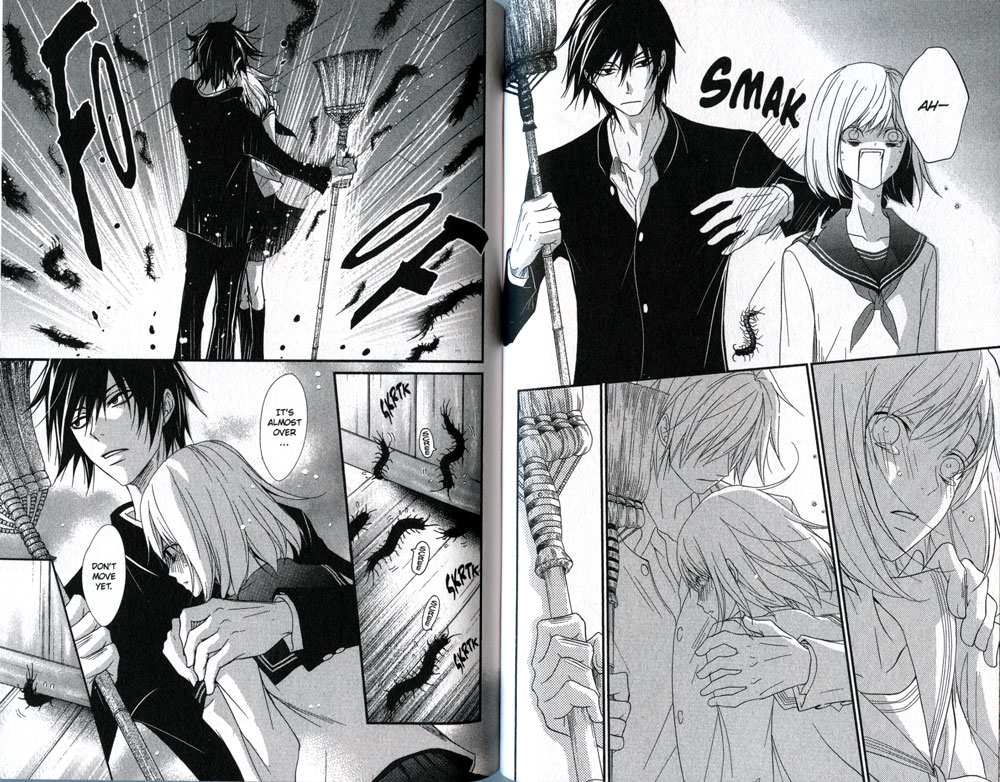 Overall, QQ Sweeper sets up some interesting ideas and the premise is good. The execution just isn’t quite there. You’re never really given a reason to root for the characters beyond being the leads because they just aren’t very interesting. The villain is a flop as well and so that doesn’t make for an amazing dynamic within the cast. There are a ton of plotlines still ongoing which also works well for the sequel, but when you think about it nothing really happened in these 3 volumes. We got to see Fumi help some people but none of the important questions have been answered as of yet. I’d also like to see the Sweepers actually take the fight to the bug users instead of thinking about them as myths. The latter means that the bug guys have been doing whatever they wanted for years now which doesn’t sound all that responsible on the part of the heroes. In the end the series isn’t bad, but it’s not really good either. Check it out if you think the premise sounds fun and then just wait for the sequel.