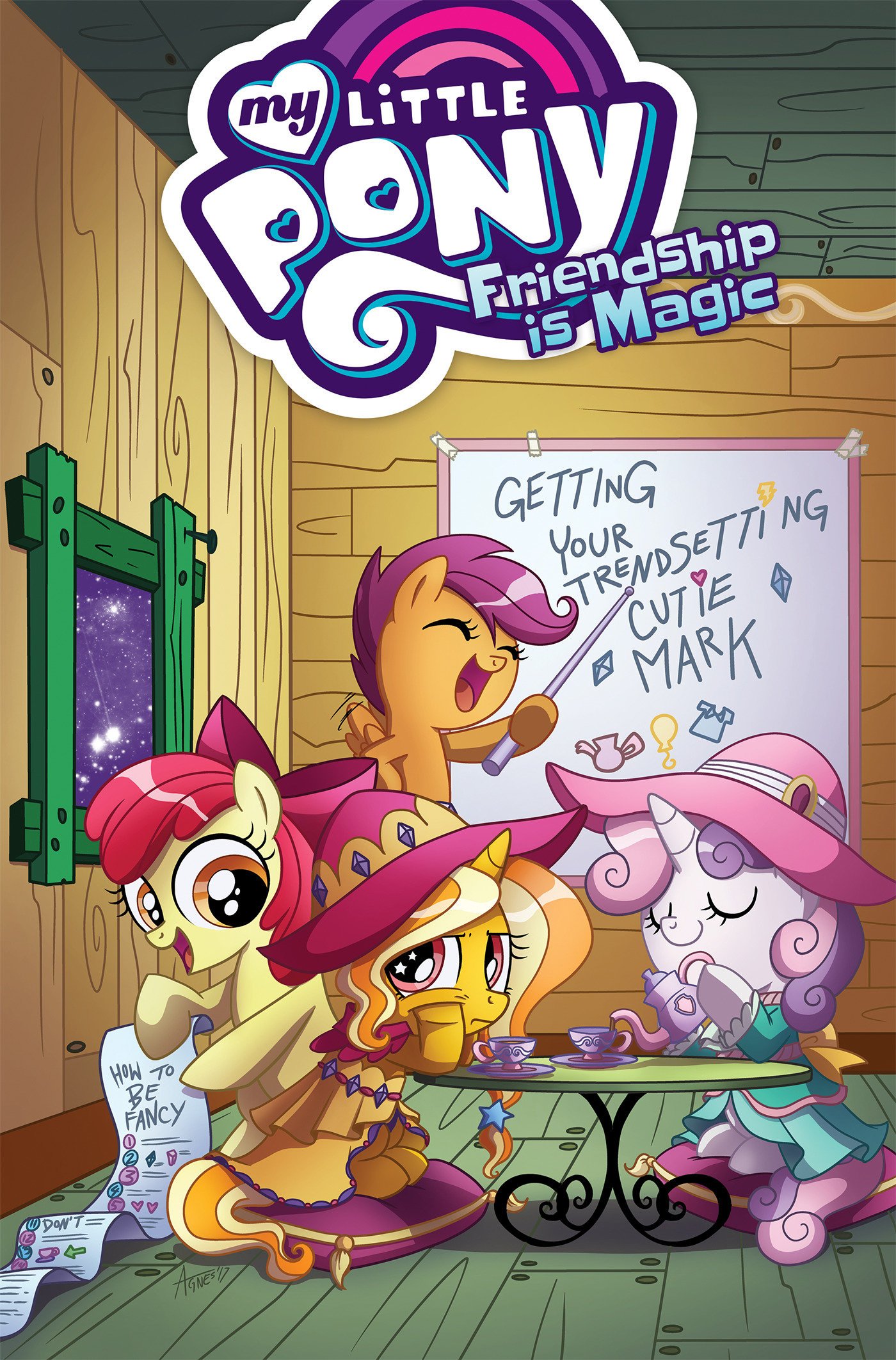 It’s time to look at one of the volumes for the main MLP:FIM series. We’re jumping all the way to volume 14 so these issues are actually fairly recent. It’s also cool that the Cutie Mark Crusaders get an issue here since I just got to read their mysteries from the spinoff. It’s definitely a solid volume and while I would give the earlier volume the slight edge, this one brings the same level of quality that you would expect from the series. Without further adieu lets take a look at em.

The first story is a sequel to the episode where Rainbow Dash kept throwing away Pinkie Pie’s pies. Pinkie has decided that she needs Rainbow to learn to love pie. Her method for getting Dash to see the light is to make a bunch of different pie flavors. She figures that Rainbow is bound to love at least one of them and that’ll be her chance. Rainbow doesn’t want to hurt Pinkie’s feelings again, but she really doesn’t like pie. What can she do? It’s tough for Rainbow because half the time she is trying to be nice and that’s why the issues happen here. Rainbow really tries to be a good sport about this, but as always Pinkie uses that as an excuse to go a little too far with her plans. She should have taken the hint that this was no fun for Rainbow.

It’s a pretty fun story and I was definitely on team Dash here. Her idea on how to get the message across to Pinkie was really quite sound. It worked effectively and also wasn’t a mean way to do it. Pinkie’s a little slow on the uptake at times, but it does sink in at the very end and Rainbow did it in a way where they could keep their friendship. It’s a solid story with a really solid resolution.

Next up is the Cutie Mark Crusaders issue. The rich moneybags is bringing his daughter along and she does not have a cutie mark yet. Rarity advises him to have her go to the CMC camp where they help little ponies find their calling. Scootaloo quickly realizes that this pony isn’t having any fun, but Apple Bloom and Sweetie Bell are confident that if they do things the way they always have it’ll work out regardless. As a result they also shut down all of Scootaloo’s ideas to make things more exciting. It looks like she will first have to convince her friends to change things up before she can help the other ponies.

I think Sweetie Bell and Apple Bloom are a little out of character here. It’s not like them to just shut down Scootaloo at every turn. It gets to the point where they cut her off and act a little rude. I’m also surprised Scoot didn’t talk back even a little. It’s great that she’s so nice, but if there was ever a time to be a little aggressive then this is it. Ultimately she talks to them and they agree to do her ideas, but not in time for the camp. I suppose there is always next year though. The main plot with moneybags goes pretty well as he isn’t disappointed in his daughter getting a telescope mark. He seems like a very reasonable guy. Certainly the supportive father you would want to have as a young filly.

With the third comic we bring the center stage back to Twilight Sparkle. She is attending an event where the rulers of each species arrive to learn more about each other’s culture. Most of them aren’t used to learning about others and are really just here to brag about themselves. Twilight is still fascinated by all of this, but things get a little dangerous when they find a scroll that says Equestria didn’t pay off the Griffins and must give up half of their land. If Twilight doesn’t find some other material to prove they paid Equestria will be changed forever in a diplomatic incident. This event just got a lot more tense.

When something like this happens you quickly learn who your real friends are. The leader of the griffins is quick to say that he wants half of the land or money with interest enough to bankrupt Equestria. Once they find the scroll he changes his tune, but it’s way too late for that. We saw his true colors quite vividly. The real villain is another member though who is enjoying this quite a lot. It’s not some grand conspiracy like he made the paper up, but he does seize the opportunity. It’s also nice to see the rulers of all the other kingdoms weigh in here. There have definitely been a lot of other species introduced over the years and it’s easy to forget that they have a lot of characters as well. My Little Pony isn’t all about the ponies anymore. I’d like to have seen Celestia stand up for Equestria a little more here, but I suppose she did what she thought was the fairest course of action.

Finally we have the anti sugar club. An old lady shows up and demands that Ponyville bans sugar. She points out all the legitimate safety concerns and the ponies quickly jump on her side. Well, most of them do. A small resistance group including Applejack and Rainbow Dash hide in the barn where they eat as much sugar as they can. Ironically this would quickly lead to everything the old lady warned them about. Twilight points out that sugar in small doses isn’t so bad though. It’s a fun comic, but Ponyville is way to quick to turn on everyone. I can understand them not wanting to have sweets for a while, but why act mean to Mr and Mrs Cake as well as Pinkie Pie? It’s not like they were baking cakes with the intent of harming people. I also thought it was a stretch that Pinkie Pie joined the old lady so quickly.

From the four comics this was the weakest one mainly because the ponies turned on their heroes so quickly. After everything the Mane 6 have done for them you’d expect a little more loyalty. The old lady isn’t necessarily wrong in that sugar is the biggest killer of them all, but you don’t need to ban it. Self control is the important thing here and eating sugar is a choice. If you choose to have a lot of it then that’s just the way the ball bounces. If you ban everything that is bad for you then you’ll run out of things quickly and will embolden the underworld. Pinkie Pie would also be the first to get sick with how many cakes she’s eating. The issue does address that though as Pinkie admits that she has a ton of vegetables off screen. Good to see that she stays healthy.

The art varies a little more compared to the other trades. I’m guessing some issues were done by different artists. It can be a bit more scattered with ponies appearing off model, but overall is looks pretty good. The colors are on point and it’s definitely a comic that is very easy to read. You’ll be breezing through as you enjoy the nice adventures. The writing is always solid and these issues just make for a fun read. There’s really nothing negative to say about them.

Overall, Friendship is Magic continues to be a solid series. My favorite issue was the third one. It was a good way of getting all of the different groups to put aside their differences and team up. It’s also nice to see how proud of their cultures each animal is. The dragons may be rather arrogant, but beneath that it’s just because they want to make sure their fellow dragons are given respect. The same can be said for all of the others. By the end of this ceremony they are all a lot closer than they were before it started. I’ll be starting the next volume pretty soon so get ready for another review!