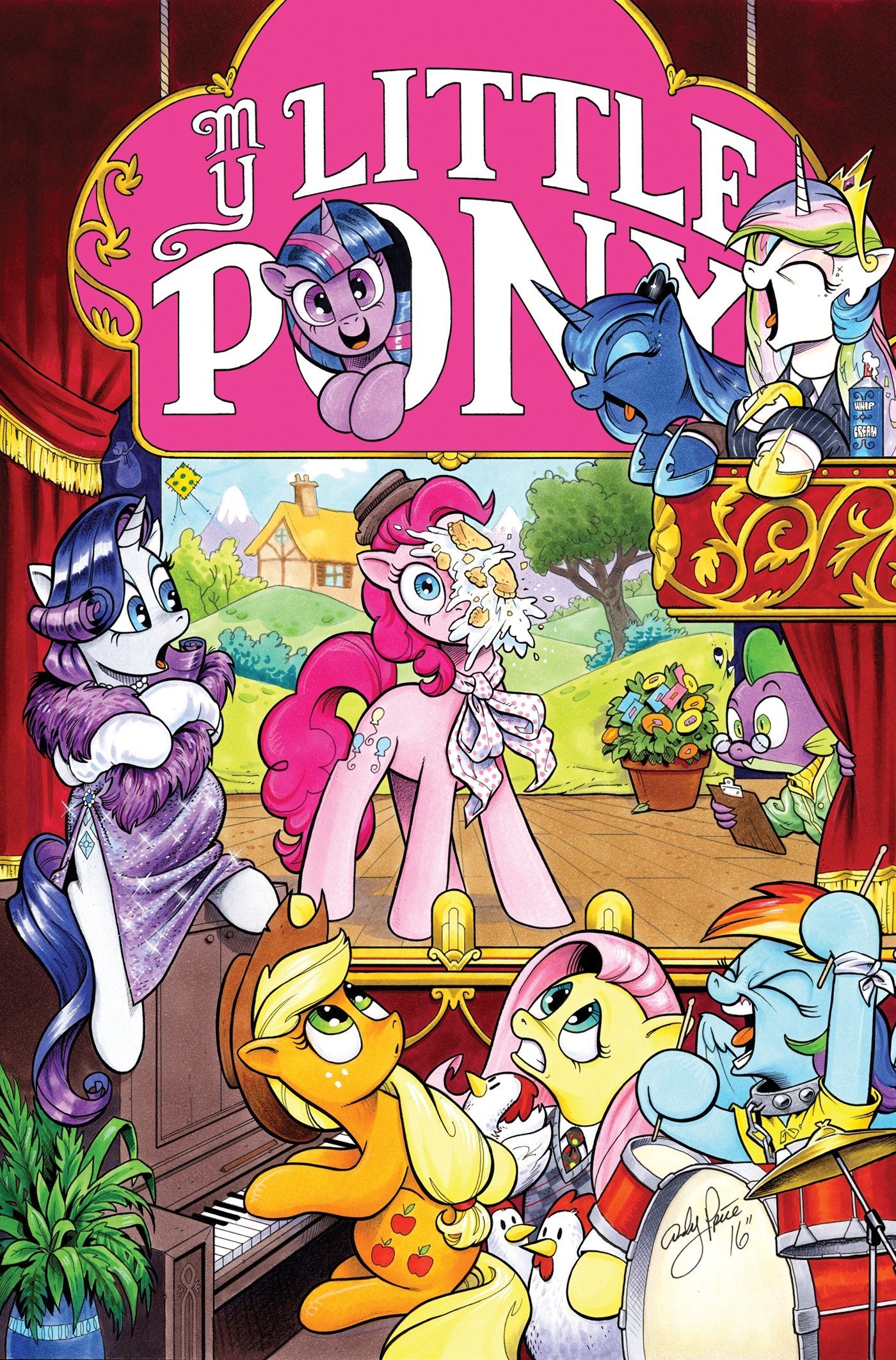 It’s time for another My Little Pony comic adventure. Slowly but surely I’m getting close to reading all of the volumes. This one actually has a few stories that span several issues which is cool. I always like when the series goes for complete story arcs rather than one shot issues. With the extra page space there is just so much more you can do to flesh out the adventures and make sure everyone gets a role. It means there are less chances for other characters to get a chance to shine, but it is worth it.

First up we’ve got a long story arc with Discord. Things haven’t been going well for him as of late because he just can’t help but act rather rudely to everyone around him. Fluttershy puts up with it, but the rest of the Mane 6 do not. He decides to seal himself away and transforms into a being known as Accord. He just wants to bring stability to the rest of the world. At first this seems pretty good, but he starts to get a little too drastic when he begins mind controlling innocent ponies. The Mane 6 realize that they are going to have to stop him, but what if that means Discord will return? This’ll be one of their toughest cases yet and they may need to ask for help from the superstar Starlight Glimmer!

It’s been so long since Starlight Glimmer got to have a starring role so you can bet that I was super thrilled to see her return. As always she ended up being the power hitter here and the only one who was resistant to the mind controlling abilities of Accord. She’s often overlooked during the series, but when a crisis is at hand there is nobody more dependable than her. I think her presence is part of what legitimizes this as a real threat. We also get to see almost the entire rest of the main cast from the series which is pretty neat. It always makes for a good premise when you have someone slowly corrupting everyone in the town through magic. It’s like the Phalanx arc in X-Men.

By this point I can see why everyone would be tired of Discord in Ponyville. He seems to make a whole lot of mistakes which come back to bite everyone, but at least this time it wasn’t intentional. He doesn’t seem to have any control over Accord although it is basically him so I won’t cut the guy too much slack. It was also interesting to see the Elements of Harmony actually fail this time. Those objects usually work so it was a pretty startling moment. Accord was one of the most serious threats that Equestria ever faced and I hope everyone gave Starlight a proper thanks at the end. The whole volume would be worth checking out even if this was the only story in it, it’s just really epic!

A one shot comic after this has Discord at the helm once more. It is Celestia’s birthday and he is unsure what kind of gift to get her. As the princess she already has pretty much anything money can buy. That’s when Discord realizes what he should do. He transforms her into a normal pony so she can hang out in Ponyville and enjoy things without everyone being on guard. At first Celestia is reluctant, but gradually she realizes that this is a lot of fun. It’s not a big end of the world plot like the last arc, but it’s a pretty cool one shot. There does seem to be a possible plot hole here though as she acts like she had never gone to Ponyville before, but in another issue we find out that she goes into Ponyville undercover once a year for this exact reason. So…..that doesn’t hold up when you think about it. I guess you could assume that she just doesn’t want Discord to know this so she is overacting which is reasonable and it’s not like this is a big plot hole either way. It’s just a nice wholesome comic and it always does sound fun to pretend to be someone else for a day.

Then the rest of the stories here involves another story arc. One night Twilight and Spike are heading back home when they notice that the door is open. A villain is inside stealing some books and while Twilight attempts to stop him, the masked thief is too powerful. He knocks them aside and escapes. Twilight calls the rest of the team in and we discover that the villain has been going around Equestria and stealing a bunch of books only to erase the information within. The heroes have to catch him before he does the same to the rest of the realm, but how can they hope to defeat a mage who is this powerful? It’s definitely going to take everyone on this mission.

It’s a pretty solid group of issues. I’m always up for a new villain and the fact that he has powers is pretty cool. That being said I do think that he gets off rather lightly here. The guy damaged a bunch of irreparable books and they basically just told him to stop doing that. I know at the end of the day the heroes are rarely going to beat up on bad guys here since friendship is what solves issues, but this guy was a total crook. His origin story for why he was doing this was pretty shaky and at the end of the day it was really just an excuse to go wild on the town.

I also think the Mane 6 didn’t treat this too seriously for a while. Twilight should have put up a much better fight against the guy at the beginning and when she called in the Mane 6 they should have been investigating rather than turning the whole thing into a slumber party. I dare say that Applejack and Rainbow Dash took this situation the most seriously compared to the others at least. It was nice to see the group split up into pairs to dig up some dirt on the villain. It felt like how things would have played out in a two part episode. So while the ponies should have cracked down on this guy sooner, it was still a really solid adventure to end off with. Hopefully the villain will return someday and we did get an interesting cliffhanger of sorts so I wonder if that plot will be resumed.

The art tends to shift from arc to arc, but it’s definitely pretty solid. The only iffy one is the Celestia issue as that artist always draws everyone like little kids. Celestia should not look to be the same height as Twilight and pals. It has a nice cartoony look to it though so the colors are still on point. The series has always been very expressive and easy to read which the issue still captures. You’ll have no problem reading through these issues and just having a good ole time.

Overall, Friendship is Magic continues to be a solid series volume after volume. There’s really nothing bad to be said about it and the pacing is on point. This volume in particular has two different arcs making it one of the strongest volumes that I’ve read. In particular you’ll definitely want to read the story with Accord as it is played pretty seriously. I still think it would be a good idea for the show to come back and adapt these stories at some point. There are just so many good ones to choose from!