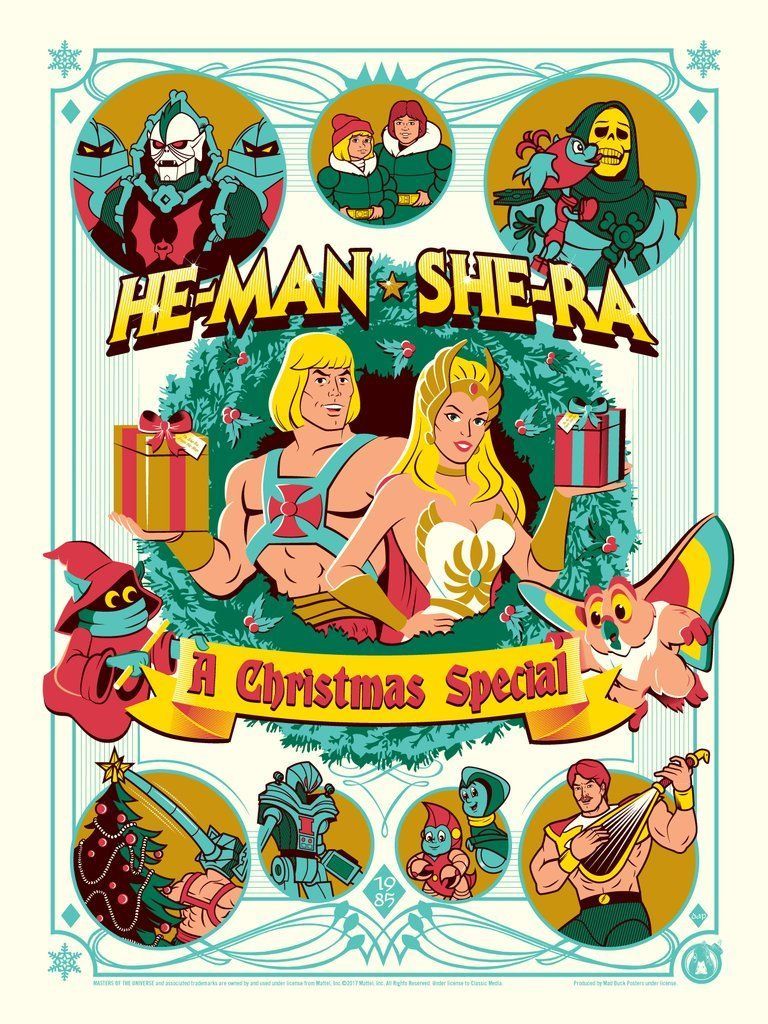 It’s time to look at the classic He-Man Christmas special. This one is definitely pretty well known as a solid special from back in the day, but I hadn’t gotten to check it out til now. I can safely say that it does hold up remarkably well. You really don’t even need to know much about He-Man outside of the general premise and you’ll be fine here. It’s got a good dose of action and wit which makes for an enjoyable experience. It definitely reminds me of how much I miss the classic show.

The special starts off with Orko getting into a spaceship that he wasn’t supposed to enter and being blasted away. He-Man and She-Ra find out about this afterwards, but by then the mage is already all the way on Earth. Fortunately for him he bumps into two kids and they explain to him what Christmas is. By this point the heroes made a teleportation beam which takes them home, but Skeletor shows up and kidnaps the kids. The heroes will have to hurry and save them before CHristmas passes them by, but can the kids show Skeletor what it means to be a nice guy in the meantime?

This special wastes no time as it throws you right into an action scene. We get to see why He-Man is such a confident guy as he completely wrecks his opponents. He would have actually lost despite his impressive showing if not for She-Ra stepping in. They really do make quite the team as they cover each other’s back from sneak attacks. When they are together it’s hard to picture any opponent stopping them. The character cast is incredibly strong which is part of why the special is so good. He-Man’s always got a good one liner for everything. The puns and witty dialogue just don’t stop and I haven’t seen a film with writing this good in an extremely long time.

Meanwhile She-Ra has a very catchy theme song which plays almost every time she is on screen. It’s got a really great beat to it and it’s something you can listen to for a while. Surprisingly He-Man didn’t have a tune of his own, but I’ll assume that in the show he had one. Both of them have good transformation scenes where they say their catchphrases though. There are a few other heroes but other than Orko none of them are that important. Orko also doesn’t contribute nearly as much as the main two so he is pretty forgettable. His magical abilities seem to be quite weak as just saying a phrase can deactivate them. No wonder he is always getting into trouble.

Then we’ve got an ensemble of villains. The one that everyone should be familiar with by this point is Skeletor. He’s got a really iconic design and he’s strong enough to put fear into any opponent he goes up against. Even He-Man should be a little wary of taking him on one on one. His voice really seals the deal for the character as well. Now, his scenes with the kids may be a bit cheesy but he does need to take them in alive so making them coats made sense. I also do like that he grumbles about everything even if he ends up helping out at the end. A good villain isn’t afraid to help people out if it’ll further his goals and this tells me that Skeletor has a lot of confidence. Just look at Darth Vader, Garou, or Shego. They’re villains to the core, but they did step up to help someone out when the time was right. It’s just something that a quality villain will do. I’ve always liked Skeletor and I was pleased with his portrayal here.

There are other villains though like She-Ra’s main antagonist Hordak. I’m not really familiar with him, but he does have a pretty cool design as well. He seems like a second rate Skeletor, but one who could probably hold his own. He may have lost to the robots, but he still seemed like a pretty cool villain. Then you have Horde Prime who doesn’t actually get to appear but he does have an intimidating voice. I really didn’t know anything about this guy so it would be cool to see him show up at some point. The He-Man universe is definitely filled with a lot of interesting characters. Finally we can’t forget about the Monstroids. These guys had cool designs and were really having their way with the heroes. They were definitely surprise hits and I won’t be forgetting them anytime soon.

The animation here is really good and feels like peak 80s-90s animation. You’ll get a Cybertron vibe from the Monstroids planet as well. The fight scenes hold up and it’s always good to see He-Man and She-Ra just wrecking their opponents. It’s easy to see how they could keep up with the Justice League when they’ve fought each other over the years. A good special should be accessible to new viewers while also being fun for long-time fans and I’d say that this one really managed to satisfy this. It certainly got me more interested to take a look at the TV show from back in the day. I suspect it would be a whole lot of fun and would probably even beat out the various competitors from back in the day except possibly for Transformers.

Overall, This He-Man special is one that I highly recommend watching for Christmas. I don’t care if you’re familiar with the series or not, it’s just good wholesome fun. This style of writing you don’t see much anymore and it’s a shame. I liked the unbounded heroism and confidence that you see in the heroes here. They’re not self aware or parodying themselves, they just know that they are strong enough to keep the peace and stop the villains. It’s why they are symbols of hope in the universe. Hopefully we get a new He-Man film at some point because I’d love to see what these two could do with some modern effects as well.