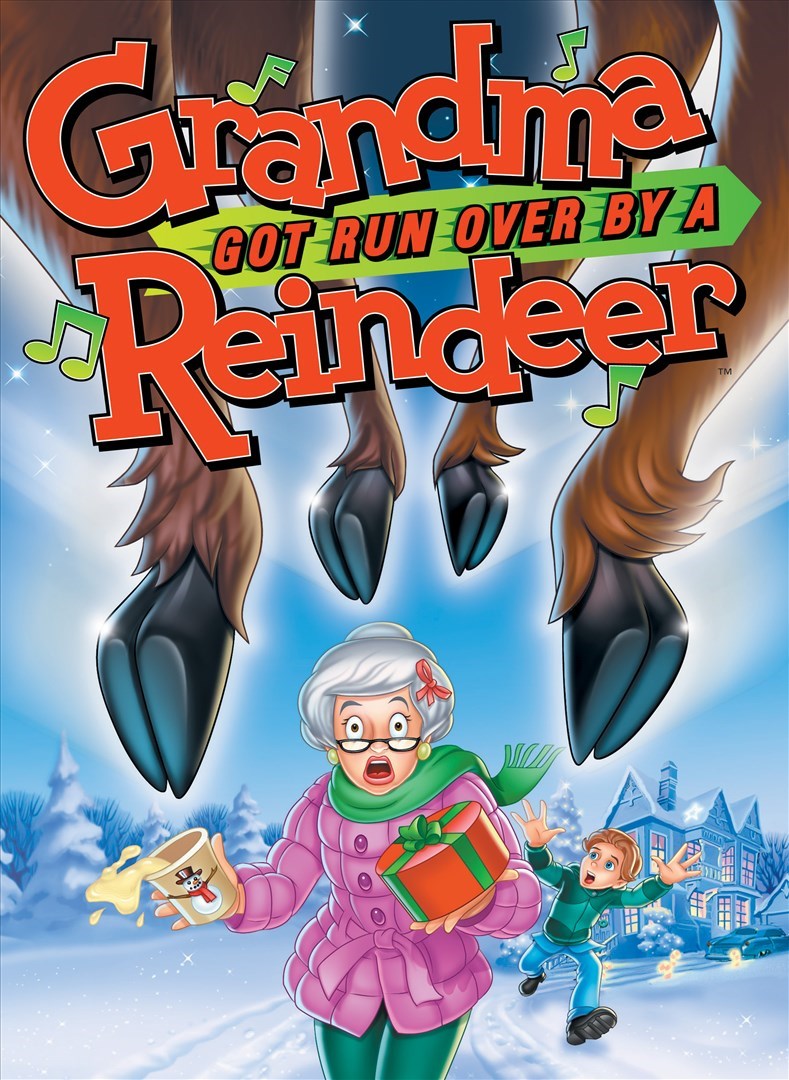 It’s time to look at a very well known Christmas film from back in the day. The title already lets you know that this is either going to be a meme worthy film or it’s going to be terribly mean spirited. It’s the former and the film is a complete success. The movie just rolls with this crazy premise and it’s one of the most entertaining films I’ve seen in a long while. The characters are all portrayed perfectly and the only negative with the film is that it ends so early. I could have kept going with this movie for at least another half hour or so.

The movie starts by introducing us to the cast. Grandma’s run a successful store for a very long time. Unfortunately she is so nice that the town tends to take advantage of her by going in and doing shopping, but then remembering that they “forgot” to bring some money so they have to take it on credit. Cousin Mel has had enough of this and tells Grandma to charge these people. Grandma will do no such thing, but Mel knows that soon they will all be bankrupt. She needs to find a way to get some money for her family. That’s when Austin shows up. He’s an ultra rich guy who has bought all of the stores in the city with Grandma’s being the only one left. If Mel can find a way to bump off the grandparents or get them to sign a deal to sell the place she will be able to make herself rich…and pay for the family to live well enough. It’s mission time!

Wait a sec…what about the title right? Well, Grandma gets run over by a reindeer early on in the film and vanishes. She is presumed dead by most, but Jake believes that she is still out there somewhere and he aims to find her. The scene of her getting run over is definitely surreal as Grandpa sees this happen, but actually gets really happy about it. He’s borderline ecstatic which is surprising since later on they act like the two are still on good terms. The rest of the family doesn’t see this and they prevent Jake from going outside for a while because they are so sure she is okay. By the time they go outside she is gone.

The film is very ambitious with this as we get a 9-12 month timeskip where Grandma is gone the whole time. That’s actually pretty dark for the characters if you’re thinking about it. I certainly felt bad for good ole Grandma. There’s a twist about where she is although you would probably be able to put two and two together in this case. Grandma’s a good character, but maybe a bit overly idealistic. You can’t realistically give things away for free too often because people will take advantage of you. Especially those who are your “friends” if they realize that they can get benefits for being nice. It’s a dangerous game she was playing.

Jake’s parents are good for the most part, but they have one scene where they look bad early on. Grandma needs to bring some cookies over to the nearest shelter/soup kitchen and nobody offers to go with her. Keep in mind that it’s super late and dangerous outside which the parents are sure to tell her about, but then they still don’t go with her. Why even half heartedly ask her to stay if you aren’t going to help? It was definitely pretty odd with Jake being the only dependable guy around.

Jake was actually a standout character. Usually I’m not a big fan of the kids, but I have to give him some major props because at least he was actually trying to do something the whole time. He repeatedly ran for the door to help Grandma even if the adults stopped him. Then he never gave up the search for a whole year as he tried to locate to Grandma and even skated into the villain’s headquarters multiple times to stop the corrupt dealings in there. There’s nothing else I could have asked him to do and so that means he perfectly handled the situation. I don’t expect I’ll see another kid quite as competent as Jake in a long time. Most characters could learn a thing or two from him.

One of those characters would be Grandpa because he just looks terrible throughout. First off he wouldn’t help Grandma and then he crumbles under pressure when Mel shows up. At first he had some potential there as he randomly started to sing, but then he let the age catch up to him and got delirious enough to sign the papers. At that point I had to shake my head because he was making every kind of mistake that he possibly could. I expected better from this guy. While Slime was a villain, at least she was really good at her job. I liked her confidence and she even managed to negotiate a pretty good commission for herself.

Mel is one of the biggest characters here though and she is an exceptional villain. She makes a lot of good points and while she invalidates them all by resorting to kidnapping at least you can understand where she is coming from. Her motives are anything but pure even if I made it sound that way in the summary. She just wants to be rich and will do anything in order to achieve that dream. Mel is resourceful and determined, two traits that are important for any character to have. She was also willing to talk in court when most villains would have played dumb there. She doesn’t do anything half heartedly and you can respect that.

Finally we have Austin who is probably the most reasonable billionaire I’ve ever seen. Most of these guys are treated as corrupt villains who will do anything to get the store. That’s not Austin’s way. He’s willing to dress up as an elf in order to broker a deal and makes sure to do everything legally. He even gives the heroes the benefit of the doubt when they ask him to wait. I was surprised at how well his character was handled. I’m also glad that the film didn’t go out of its way to give him a mean ending either because he didnm’t deserve one. The guy was just a really good business owner and this points to how good the writing in this film was. The guy was just realistic and downright likable. He reminded me of the lawyer who also appeared in the film later on. That guy was pretty good too as he reminded the jury that they had to be impartial and only consider the facts. It’s not like he wanted to slam Santa or anything like that, the guy was just doing his job and doing it well at that.

The animation here is really smooth. The characters all look good and everything is very bright and detailed. There’s a lot of fluid movement here and the characters are very expressive. It’s just a very great feature all around. Then you’ve got the soundtrack which may not be the most inspired, but it has some good tunes. The song of Mel and Slime talking about how they were going to get rich was solid and the Grandpa’s song may not have been the best, but I loved the segway into it. It was also a scene that showed how cunning Mel was as she played along in order to get what she wanted.

It goes without saying that the film is pretty good at comedy as well. Pretty much all of the jokes land and it was one of the funnier specials that I’ve seen in a long time. It’s because the movie uses the quick wit style of humor that I always enjoy more than the long build up to a joke style that others use. A quick remark or a fast comeback just goes a long way. Mix that in with the film’s top notch writing and you’ve definitely got yourself a winner.

Overall, Grandma Got Run Over By A Reindeer is a great film. You really need to see this one for Christmas because it’s just a lot of fun. Nothing about the film feels like it was cheaply made. You’d think that it was slapped together but the film has a lot of heart in it. I dare say that the only weak part of the film is the song that it was named after. That song isn’t particularly catchy but since we got the film as a result of it I’ll cut it some slack. This is the kind of movie where I’d be nervous for a remake or sequel because it’s incredibly unlikely that it could top this one.