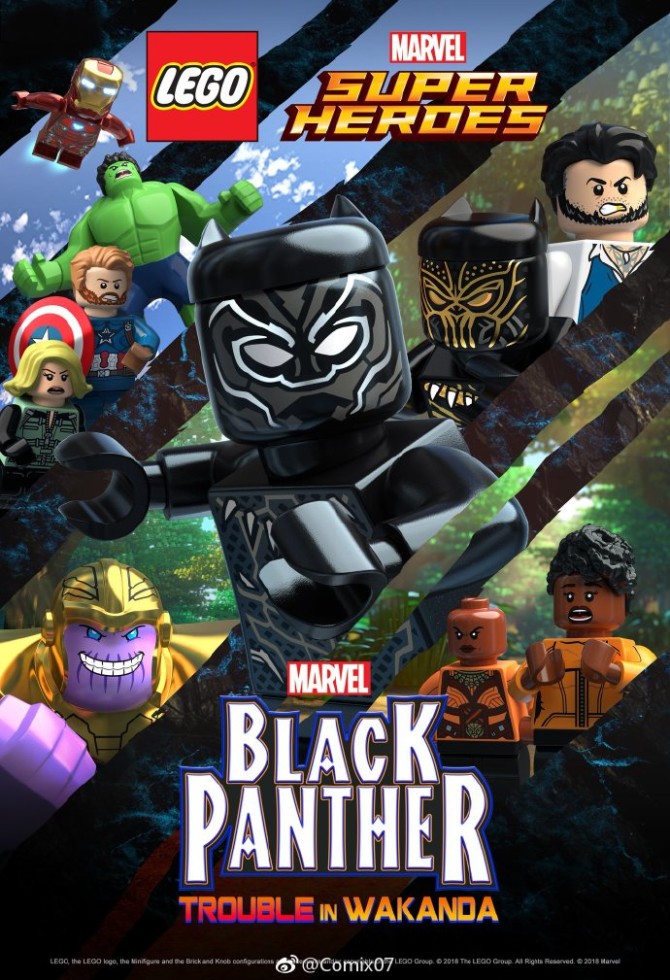 It’s time to take a look at a Marvel Lego special this time around. Historically they aren’t quite as good as the DC ones. The DC ones tend to have better fight scenes and more of a solid all around cast. The characters lend themselves to the Lego format really well partially because the core members of the Justice League are so well known. Guys like Batman and Superman basically write themselves. Still, this lego special still holds its own and makes for a fun watch.

The special starts with Black Panther giving an interview about how talking is great and all, but we need action. He intends to walk around in his Black Panther suit all day to get this message across, but he is interrupted by an attack from Thanos. Fortunately, the Avengers were eating nearby so they beat him pretty quickly. Looks like things are coming out all up for the heroes now right? Well, little do they know that Klaw and Killmonger have found Thanos and enlisted his aid for their upcoming conquest of Wakanda. The Avengers already had a lot to deal with facing Thanos, can they really beat this group of villains?

It must be tough being the ruler of Wakanda because it seems like everyone is always trying to get inside to steal the Vibranium. The place just never gets any peace. Panther is also the only really strong fighter there so without him everyone tends to get captured and kidnapped. He can’t be in two places at once after all so in a way I can see why he usually doesn’t want to be an Avenger since it would mean being away from home more.

Naturally the special is more comedy oriented than the main shows would be so it pokes fun at the villains a lot, but the general idea isn’t all that bad. They break into Wakanda to power up Thanos and in exchange he’ll let Killmonger rule the land. Sure, the odds of Thanos actually doing this are pretty slim, but he is one of the more honorable Marvel villains at times. Perhaps he actually would keep his end of the bargain and help the guy out. Considering that Thanos wants to end the planet though I find this to be pretty unlikely.

It’s nice to see Killmonger since he’s a pretty fun villain. The guy makes for a good antagonist to Black Panther and I could definitely see him appearing more frequently than he used to since he had his appearance from the film. Klaw is significantly less interesting though and I can’t say that any of his scenes were particularly engaging. Thanos is fun as always although he’s probably the biggest parody of himself. It’s hard to take Black Panther overpowering Thanos 1 on 1 very seriously in any context, but hey….Thanos finally met his match.

As always I’m not the biggest fan of the Lego animation but I do think it’s a little crisper than it used to be in the original days. It may not be as smooth as DC’s but it gets the job done. We do get real action scenes which is always good. The legos make for good destruction effects since they all break down so easily. The city environment is also good.

We get some nice humor scenes as well. While the more obvious ones like the villains not being very smart don’t pan out, the wording jokes are always the best. For example Iron-Man says it’s time to wrap things up…before getting the server to wrap up his sandwich rather than entering the fight. Puns and quick banter are always the best forms of humor if you ask me although you can get any kind to work if you achieve it properly.

Overall, the special is pretty quick so it’s all over before you know it. The special never drags on so that’s always a good sign and it was enjoyable. It felt like an episode of the recent Avengers Assemble show, especially since Black Panther was the main character. At this point it would almost be odd if he wasn’t a main character. This special probably won’t be blowing your mind away or anything like that, but it’s definitely a solid installment and stands up on its own. If you like the Lego specials then you’ll enjoy this one.