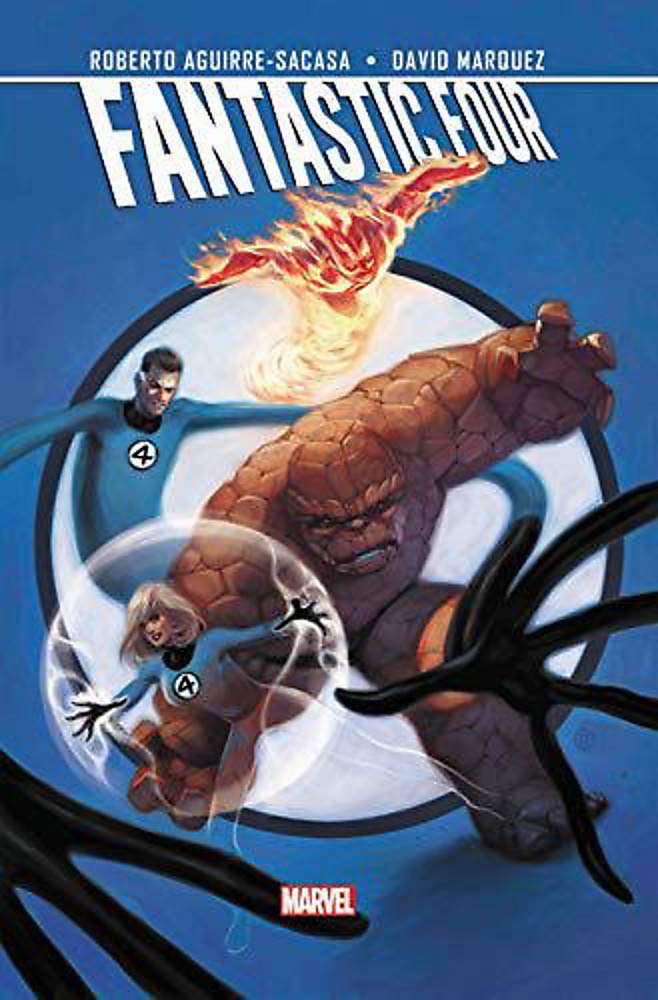 It’s time to look at a recent take on the Fantastic Four origin story. It’s definitely a classic origin that everyone knows pretty well by now, but it hasn’t been remade quite as often as some other origins like Batman’s or Spiderman’s. It’s also been a while since I read it so it was a fun trip down memory lane. There are some new elements added like the Mole Man, but for the most part it plays it pretty straight and is certainly a solid comic.

So the book starts with Reed Richards deciding that he wants to be the first person to go to space with his crew and investigate some cosmic rays. He gets his Susan, Johnny, and Ben Grimm to go with him. His partner in science warns Reed not to do this, but he doesn’t listen and they all get blasted by cosmic rays. Now Reed can stretch, Human Torch can fly and shoot fire, The Thing has a rock solid defense and super strength while Sue can turn invisible and create powerful barriers. They are now going to be called the Fantastic Four and must keep the world safe from those who would oppose it.

The first half of the book is about the heroes getting used to their abilities and after that we get two main adventures. The first one deals with the Mole Man as he shows up to attack the city. His underground monster is certainly fierce and since the city has no real protectors at the moment he does a lot of damage. It’s a pretty fun first story and the direction they took the Mole Man in here was unique. It’s a nice spin on the typical adventure and seeing him as a supporting character would be pretty fun. He’s no Reed Richards but certainly quite smart in his own way.

The other story involves Namor as he regains his memories and decides to destroy the city. He also ends up falling for Invisible Woman in a sub plot. I’ve never been a big fan of the guy and that hasn’t changed now. He just feels really petty all the time and not very smart either. He’s like a very petty version of Aquaman. It’s still a solid follow up story though the first one wins on all fronts. This certainly won’t be the last time the FF have to deal with this guy.

There is also one bonus adventure at the end which works as a preview for another series. We see the FF deal with the Wizard and Reed then heads back to base where he has been quite distant for a while. The various clones that the Wizard creates disturbed him and so he heads to his secret place, a convention of Reed Richards from various parallel universes. A few of them even have the Infinity Gauntlet and they have invited the main version to join them. It’s a pretty compelling pilot and I did enjoy the artwork quite a bit. Reed’s current design would take some getting used to, but I could definitely see the arc being quite great.

Back to the main comics here though. One thing I liked here was how quick Reed was able to find a cure for Thing and his determination here. Part of why Ben was always upset is because Reed is so smart that he could do just about anything and yet curing The Thing always seemed to be something that was quite far off. That’s not the case here and in general Reed is just quite solid. He’s one of the more underrated geniuses in Marvel seeing as how I would actually put him as the smartest character in the verse.

Invisible Woman also looks good and her powers get a lot of credit. She’s always been the strongest member of the team, but the original comics didn’t always do a great job of showing it. There is no doubt who the power hitter is in this collection and that’s a good thing. How do you beat someone with near unbreakable barriers and an array of other force related abilities? Human Torch easily gets the smallest role of the 4, but he’s in character. He definitely has the most fun with his abilities.

The Thing is my only real problem with the comic. His bad attitude is usually not all that justified but other comics have done a better job of showing why he’s so upset. Here he goes from 0-100 as he tries to murder Reed almost as soon as they exit the ship. I thought that was a bit much and a total overreaction considering what just happened. There wasn’t even enough time for the implications of the crash to totally hit him. Reed handles this as best he can, but the Thing never truly came back from this rocky start.

Meanwhile the Mole Man looked pretty good and as I mentioned earlier he has a bit of a unique character arc here. I get the feeling that he would ultimately turn evil if the series were to keep going, but at least right here right now he wasn’t bad and gets to be in an adviser position. There may quickly get to be too many brains in the room though. In this version Reed has an assistant who doesn’t get along with Sue all that much. Fortunately the comic doesn’t even try to turn this into a romance triangle because Reed’s definitely not the kind of guy to waver and Sue’s not petty enough to actually get too upset at the assistant. Nevertheless, they don’t get along much and I wonder what the point of this character is. She doesn’t hurt things or anything, but if you cut her out then nothing really changes at all.

The intro also throws you a few easter eggs like a quick cameo from Dr. Doom. I’d say that the story did as much as it could within the page count and is one of the better origin stories. I also thought the art was really solid. It is definitely above average and the pages all flow together really well. I ended up reading the trade from cover to cover. Sometimes it’s nice to go back to the simple days of street level threats rather than galactic showdowns. This is a comic that new and longtime fans can enjoy.

Overall, This is a pretty solid comic. It takes us back to the basics of the series while keeping the adventures fresh. The Thing is still pretty ungrateful the whole timed you ask me but he definitely did get the worst transformation out of the 4. Reed brings up an interesting point that the other 3 can at least look normal through sheer willpower so it is odd that the Thing can’t do so. Maybe one day he would be able to control his power, that would definitely be a cool plot twist. If you haven’t read this comic yet then I would certainly suggest checking it out. The writing is pretty sound and it’s an engaging read.