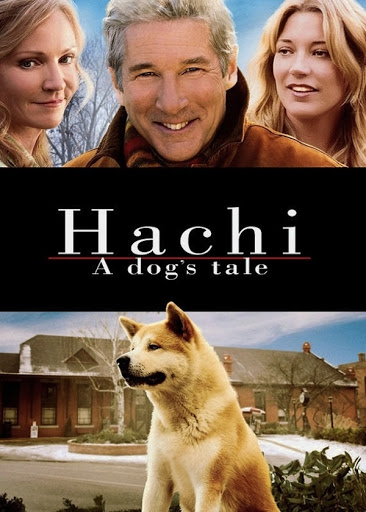 It’s time to look at a film based on a true story from a long time ago. I’m sure you’ve heard the tale of Hachi/Hachiko from back in the day. Well, this is a modern re-imagining of it. With films based on true stories you already know the ending so it’s all about the execution. Is the film still able to sell you on the characters when you know how their stories conclude or will you be left wanting for more. I’d say the film seems like a pretty good adaption of the event. The characters are nice enough and the film doesn’t try to get too over dramatic.

The film starts off with Parker’s grandson talking about his hero. He picks Parker’s dog Hachi as his hero. We then cut to a flashback where we learn about this. Once upon a time, Parker was leaving his train when he saw a lost puppy all alone. He picked up the dog and took him home. He couldn’t find the owner for the puppy even after posting flyers everywhere so he ended up keeping him. The dog’s name appeared to be Hachi based on the symbol on his collar so that became his name. Parker’s wife Cate was not a fan of the dog for a while but eventually relented. The two of them shared a good time until the end of Parker’s days. Hachi never forgot him and ultimately a statue was built in Hachi’s honor.

It’s a pretty good emotional film. I’m glad Hachi ultimately had a good run and the film didn’t go for a tragic twist like him dying of anything other than natural causes. The film portrays Hachi as a very intelligent dog who really knew what was going on and even memorized Parker’s trains. He was a nice dog who always brightened up everyone’s day. Hachi was also resourceful with how he would find ways out of the house and paths to Parker. Even the family moving out of the neighborhood wasn’t enough to stop him.

Meanwhile Parker did a pretty good job of looking after Hachi. While he did his best not to get attached he always treated Hachi very well. If anything he would have spoiled him further if not for Cate slowing things down initially. My only real complaint is Hachi having to stay outdoors the whole time. I’ve never agreed with having the dog outside. The dog should always be in the apartment/house at all times free to do what he wants. A dog should be given complete freedom to have fun. A dog house is really excluding the dog from the full experience the film shows that Hachi was always sad to be out there.

Cate was the worst character for a majority of the film, but fortunately she got better by the end. Deciding not to look after Hachi even by the end was pretty sketchy though. Hachi needed at least one of the owners to stay with him even if they never developed a bond the way he did with Parker. It just makes sense that they wouldn’t be super close since we never got to see her play with him. Cate was definitely a much tougher owner than the rest of the family.

Then you’ve got the daughter Andy and her husband Michael. They do their best to look after Hachi a bit too, but give up way too fast. They definitely should have kept Hachi with them instead of letting him freeze out in the cold for so long. Things worked out well for Hachi but it was still quite the gamble. They had to depend on the fact that it was a nice community for Hachi to have a good time. One of the best characters in the film was definitely the hot dog vendor Jasjeet. Jasjeet provided for Hachi in the end and liked the dog from the start. He was always glad to have some company and it did both characters good.

It’s been a while since I’ve seen a film like this where every character is fundamentally nice. It’s not the kind of movie that really needs an antagonist because real life doesn’t always have a villain like that. It’s hard to picture a community being so nice and welcoming to Hachi nowadays though. These were just different times and it’s nice to see how peaceful and wholesome the adventure was. The film isn’t particularly long so it’s over with pretty quick.

Overall, Hachi is a solid film. It’s definitely on the emotional side especially since you know how it’s going to end. It’s easier for a person to be alone than for an animal because they don’t really understand why they are now alone. It’s as if the person just vanished out of the blue. They won’t be able to meet up again until Heaven and that’s even assuming that the owner was Christian. If you’re up for a story like this then Hachi is as good an adaption as any. It’s not really my kind of film but you should more or less know what you’re getting into right away unless you’re unfamiliar with the legend. If you don’t know how it ends then I suppose the film will be more unexpected which could work out well.